How To Handle A Dog Around Your Chickens

Wild predators are a sure threat to your chickens, but don't forget that a neighbor's dog (or even your own) can and will kill a beloved bird, too. 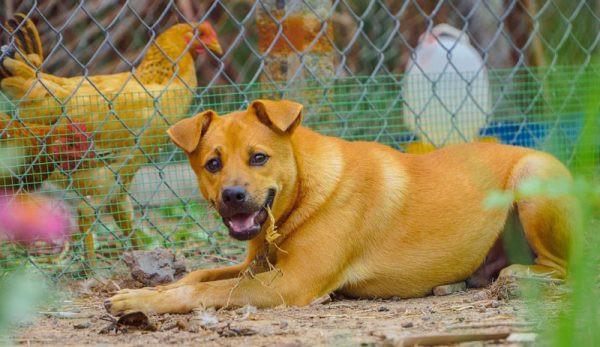 My son Jaesonâ€™s shout brought me running to the kitchen sliding-glass door, our main exit point to our deck and back yard. Sure enough, a brown canine was ambling between our Orpington and Ameraucana coops, tongue lolling out. We have a local coyote pack and it wasnâ€™t unusual for a scout or two to trot across our property. That usually happened at dusk, however, and it was barely past noon. Slipping my shoes on, I stepped outside to get a better look.

The moment it sensed my presence, however, the canine turned tail and dashed for the property line, its silhouette recognizable as it ran. This was no coyote. This was our neighbor Dickâ€™s mutt, who had somehow managed to escape the confines of his own yard, several acres away. His afternoon of adventure was thwarted by yours truly, waving my arms and yelling at him to get back home.

A dog may be manâ€™s best friend, but I know canines arenâ€™t necessarily chums with chickens.

Dogs are actually one of the most common poultry predators, especially if they possess high prey drives. A high-prey drive is an aggressive tendency to stalk, chase, hunt, attack and kill other animals.

Some dog breedsâ€”such as Siberian Huskies, Samoyeds and Alaskan Malamutesâ€”possess an instinctive, independent tendency to seek out prey. Breeds such as terriers, hounds, spaniels and retrievers were specifically bred to hunt.

Read more: Protect your poultry with these 4 predator-proofing tips.

A Dogâ€™s Mode of Action

Amongst a panicked flock of chickens, the hunting instinct of a high-prey-drive dog can kick into overdrive. With frightened prey fleeing everywhere, the dog will be compelled to grab and kill every bird it can get its jaws on.

Even the gentlest pet dog can cause chaos around a coop. It can perceive your flock to be fluffy moving toys to play with.

When Scoutâ€™s â€śplayingâ€ť causes the fluffy toy to stop moving (â€¦ permanently), though, proceedings typically end. Dogs will rarely eat the birds they kill. If you discover a yard full of dead birds scattered everywhere, a dog is your likely culprit.

Occasionally, you may find that you are missing one chicken and that the rest of your flock is in a high-stress panic. The only signs left of your missing hen are a couple of scattered feathers.

This may also indicate a fox or coyote. Both of these canids can easily carry off an adult bird. But you might also discover that your neighborâ€™s prized hunting dog was simply retrieving a bird for its master.

Read more: What can you do if a neighbor’s dog kills your chickens?

Dealing with the Dog Owner

While stray dogs can indeed cause problems for flock owners, most predatory incidents involve neighboring dogs. In the best-case scenario, youâ€™ll find a very embarrassed neighbor on your front doorstep, humbly apologizing about their dogâ€™s behavior. They may offer you financial compensation for your demised bird and provide details on what they will do to ensure this kind of thing never happens again.

I like to think that most dog owners are conscientious and want to maintain positive relations with the people who live near them.

Unfortunately, there are also those who arenâ€™t, as my friends Ted and Daniel discovered. At least Ted and Daniel could lay the blame for their dead flock on somebody. Some of us may never know whose dog turned our once-happy hens into discarded, lifeless rag dolls.

In cases where there are nothing but questions, the most we can do is secure our coops and runs to the best of our abilities.

Fortunately for us, Dick was extremely embarrassed that his dog had made it all the way to our property. Apparently one of his teenaged sonâ€™s friends had come over and not closed the door behind him, providing the pup with an escape route.

Dick read his sonâ€”and his sonâ€™s friendsâ€”the riot act. We have not seen the pooch since.

Still, I always maintain a vigilant eye. I never know when someone elseâ€™s dog or some stray might leap over our run fences and wreak havoc on our flocks. I’ve also taught Jaeson the difference between a coyote and a dog, just in case one of our local pack’s scouts gets similar ideas.