How To Hatch Your Own Chicks From A Flock’s Eggs

If you've got a rooster and broody, why not leave your hen some eggs to hatch your own chicks? It's a real joy to see a mamma hen raise her own babies. 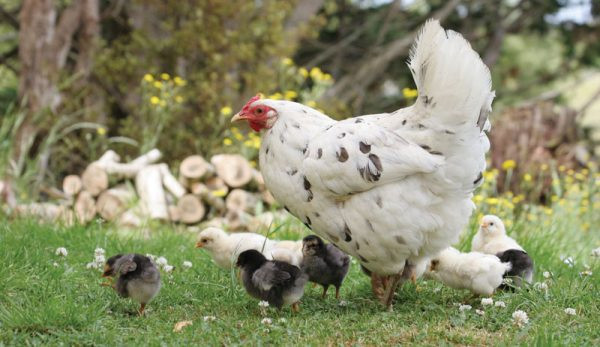 Most people become chicken-keepers so they can have fresh, tasty eggs whenever they want them. Going out to the coop every morning and harvesting the eggs from the nesting boxes often becomes a happy ritual.┬Ā

If youŌĆÖre one of these egg-gathering chicken-keepers, and thereŌĆÖs a rooster in your flock, the eggs youŌĆÖre collecting have likely been fertilized. This makes them even more desirable. Some people believe fertilized eggs are more nutritious than eggs that are ŌĆ£sterile.ŌĆØ

Enjoying your hensŌĆÖ fertilized eggs in an omelet or scrambled with cheese can be a wonderful way to start the morning. But have you ever thought about letting some of those eggs stay in the nest boxes so nature can take its course?┬Ā

A few years ago, I decided to do just that. My hens were broody, and I was always pulling eggs out from under them. TheyŌĆÖd squawk and peck me in protest as I robbed them of their clutches. They would then spend a few more days sitting on the empty nest box, brooding.

It made me sad.

One day, a friend talked me into letting one of my hens keep a few of her eggs. Instead of pushing the hen aside and taking her eggs, I left her alone. About three weeks later, I was introduced to the incredible joy of watching a mother hen raise her babies.

It was an experience IŌĆÖll never forget, and one I recommend to all chicken lovers.

Here are 10 reasons to let your hen hatch some chicksŌĆöall experiences I had with my own brood.

Broody hens can be a problem if you regularly remove eggs for human consumption. They tend to stay in the nest box for days, seemingly unable to accept the fact that their eggs are gone. But if you want to hatch some chicks, a broody hen is exactly what you need.┬Ā

Once she lays a clutch of eggs, your hen will spend 21 days sitting on them in the nest box, leaving only for a few minutes a day to get some food and water, and to relieve herself. (If youŌĆÖve never seen a broody poop, be prepared. ItŌĆÖs huge!)┬Ā

Most of the time you check on your expectant mother, sheŌĆÖll be sitting in the nest box with great purpose, feathers puffed up to ensure she covers all the eggs beneath her. (You can help her out by putting food and water close to the nest box so she doesnŌĆÖt have to wander too far for sustenance.)

Actually seeing the chicks hatch can be tricky because Momma hen will keep them covered just about all of the time. But if you keep track of when the eggs were laid and are vigilant, you might get lucky.┬Ā

On days 20 and 21, check the nest box frequently. Keep an eye out for any disturbance under the hen. She may get up and out of the box for a minute while chicks hatch but will go right back to sitting on the eggs as soon as she can.┬Ā

If you are lucky, youŌĆÖll catch a glimpse of a baby pecking its way out, but only briefly before Momma sits back down. The truth is that you probably wonŌĆÖt know the babies have hatched until you hear the sound of peeping coming from underneath Momma.┬Ā

Read more: Using an incubator to hatch your chicks? Keep an eye out for these conditions.

ItŌĆÖs likely the first time you will see the chicks is when they are poking their heads out from under MommaŌĆÖs breast feathers. In a day or so, the babies will start venturing out from under her to explore the world. This is your chance to see how many youŌĆÖve got!┬Ā

The chicks will stay close to the hen most of the time, but donŌĆÖt be surprised if one wanders farther away then youŌĆÖd think. Momma wonŌĆÖt like it and will do her best to keep all the babies close to her.

SheŌĆÖll also attempt to annihilate anyone who gets too near them.┬Ā

The family dog, the rooster or even you are subject to being chased and pecked at if she feels like one of her babies is threatened. (My Corgi made the mistake of innocently walking too close to one of my henŌĆÖs babies one day, and she chased the poor dog around the yard for five minutes.)┬Ā

YouŌĆÖll soon learn how the expression ŌĆ£mother henŌĆØ came to be applied to anyone overprotective and doting. Momma will be vigilant in protecting her young and stop at nothing to make sure they survive to adulthood.

ItŌĆÖs not unusual to see mother hens beating up cats, hawks and even coyotes who dare come close to their chicks.

Unlike songbirds, baby chicks are ready to eat on their own from hatch day. YouŌĆÖll want to provide a chick feed for them because regular chicken-sized food will be too big for them to swallow. You can put the chick mash out in a separate container when you feed your other chickens.┬Ā

The fact that scratch and pellets are too big for the babies to swallow wonŌĆÖt stop Momma from offering it to them, however. YouŌĆÖll see her call her babies to the food, clucking loudly and dipping her beak in the direction of the food.

If your flock free-ranges on your property, youŌĆÖll see a lot of this behavior as Momma wanders around the yard looking for snacks for her babies to eat. Bugs are a particular treat. SheŌĆÖll make quite a fuss if she finds one that she thinks her babies will enjoy.

Your rooster will be one to watch during all this, too, and will likely take one of two approaches to fatherhood: He will be a doting, watchful dad, or he will ignore the babies.┬Ā

Momma henŌĆÖs attitude toward him will help determine which tact he takes. If the hen tolerates his presence around the chicks, he may develop a protective attitude toward the babies, shielding them from any threats, real or imagined.

If you rooster is already an aggressive type that likes to intimidate people or other animals, he may get even more obnoxious now that he is the father of some young chicks.┬Ā

The flip side of the doting father is the rooster who wants nothing to do with the babies and completely ignores them. If Momma attacked him the first time he came near them, this is likely the result.

And you canŌĆÖt blame him.

Take a lot of pictures of your little chicks after they hatch because they grow up fast. For the first month of life, theyŌĆÖll still be cute and fuzzy, but youŌĆÖll notice they are a little bit larger every day. By week five, they will have turned into teenagersŌĆöalso known as pullets.┬Ā

You still wonŌĆÖt be able to tell which ones are hens and which are roosters. At this stage, they all look alike. You will notice they are becoming more independent of Momma now and will wander farther and farther way from her.┬Ā

At some point, theyŌĆÖll be too big to squeeze underneath Momma, although theyŌĆÖll keep trying. YouŌĆÖll know they are really growing up when you see them roosting on their own, without Momma as a shield.

After a few months, youŌĆÖll start to see gender characteristics developing on the male chicks. Their tail feathers will start to lengthen, and their combs will get bigger than those of their sisters. That characteristic rooster posture will slowly develop, too, as their bodies change shape.┬Ā

Meanwhile, the hens in the group may start laying an egg now and then. This is the time when your head rooster will be aware he has possible rivals in the flock. The young roosters are unlikely to challenge his authority at this age, but once they hit a year or so old and spring comes around, you maybe have a rooster fight on your hands.

This is a good time to rehome most of your roosters, or keep them separate with their own flock of hens, at least during the spring.

Part of the Flock

If you have ever tried to introduce a new hen to your flock, you probably know this can cause problems. Even if you make the introduction slow and easy, the established hens are unlikely to accept the new girl right away and may pick on her for a whileŌĆöor forever.┬Ā

If your new hens began with the flock as baby chicks, there is likely to be no harassment from the older hens, even after the young hens are fully grown. The established hens seem to view themselves as ŌĆ£auntsŌĆØ to the younger ones and treat the newer hens as members of the family.

Your flockŌĆÖs rooster will also stop seeing these girls as babies and will begin to treat them like bona fide members of his harem.┬Ā

Allowing one of your hens to hatch and raise her chicks can be an incredibly rewarding experience. One of the joys of chicken-keeping is observing the behavior of these wonderful birds. And no behavior is more fun to watch than that of a mother hen and her brood.

You may find it to be so much fun, in fact, that youŌĆÖll want to hatch chicks again and again.┬Ā

As the young birds become more independent of Momma, youŌĆÖll see they have formed a close attachment to each other. YouŌĆÖll notice the siblings hanging around together a lot, whether itŌĆÖs patrolling the area for food or roosting in the coup at night.

Just like all siblings, they have moments where they donŌĆÖt seem to care about each other, each wandering off alone to explore. But it doesnŌĆÖt take long before they all come back together again, making it clear they all share a special bond.┬Ā

When the sun goes down and the chickens head for the coop or the roost, youŌĆÖll see Momma go back to the nest box with her wings outstretched, calling her chicks.

The babies will run to her and scurry underneath her wings as they bury themselves in her feathers. SheŌĆÖll settle herself down around them, making sure they are completely covered. This keeps them warm during cool nights and helps protect them from any possible nighttime predators.┬Ā

This article originally appeared in the January/February 2022 issue of┬ĀChickens┬Āmagazine.