How to Identify a Shed Snakeskin

A shed snakeskin provides clues to wildlife activity on your property. Here's how to identify the type of snake and what its presence means. 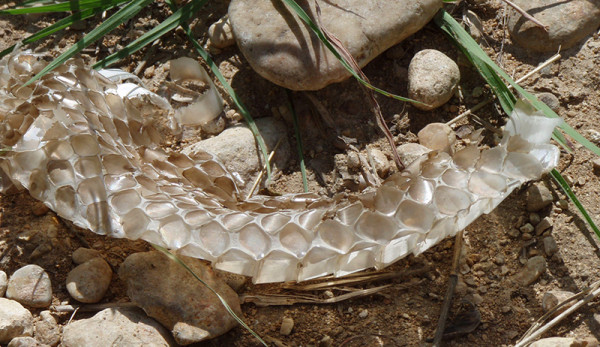 Snakes are known for their population-control contributions to gardens and farms, hunting insects and animals such as midges and moles. Beyond that essential ecosystem service, snakes amaze me as elegant minimalists. Their entire bodyâ€™s design is streamlined and purposefulâ€”nothing in excess.

Internally, the snake’s heart contains one single chamber, and the lung has only one lobe. ItÂ also smellsÂ with itsÂ tongue,Â gathering particles from the air and soil to taste with the Jacobsonâ€™s organ inside the roof of itsÂ mouth. The snakeâ€™s flexible ribs act like tiny arms and legs working from within the skin, without the risk of losing a limb to a predatorâ€”thatâ€™s what sets them apart from other reptiles and their amphibian ancestors.

An animal that can climb without legs is impressive. Specialized belly scales team up with muscular propulsion and undulation movements to go up trees, rock fences, cliff ledges and barn walls. BecauseÂ most North American snakes usually live closer to the ground than up in trees, they have evolved a way to hear without ears. Those pesky orifices would get clogged with dirt, and eardrums arenâ€™t suited for changes in pressure that a life underground includes. Snakes simplyÂ sense vibrations through the earth, taking note of any danger.

ThisÂ animal that has such a no-frills, no-fuss approach to life also takes care of grooming in one big move: by shedding itsÂ outer skin. This cleanses itÂ of parasites and allows growth, just like wriggling out of a dirty old sock. When youâ€™re out cleaning up the garden, cutting down last yearâ€™s growth and preparing for spring planting, youâ€™re likely to come across dried natural design wonders, like wasps nests, mantis cocoonsÂ and perhaps a shed snakeskin or two.

You Can Learn a Lot From a Shed Snakeskin

Shedsâ€”the term for the outer layer of skin that a snake releases during the shedding process, called ecdysisâ€”could be more commonly seen in your garden than any actual reptiles. They shed their entire skin several times a year as an efficient way to outgrow their clothing and clean house, in a sense.

Age, type of snake, health and other factors determine how many times a year a snake sheds, so you canâ€™t count it by years. Under ideal conditions, the entire length of the snakeâ€™s body sloughs off in one continuous piece. Although sheds are usually dry and fragile when discovered, it’s not always that way. The snake exudes lymphatic fluids to moisten the skin and release it.

Snakes generally donâ€™t shed where they spend most of their time. They need something to rub against to help pull the skin off, and they are in a vulnerable position during this process, thus more likely to strike. Their eyes are covered in a thicker membrane to protect them, so they canâ€™t see very well and are particularly jumpy.

The shed skin you find provides clues not only to a slithering garden friendâ€™s identity, but also to what has drawn it to your property. Is it a gopher snake after your gophers? A rat snake looking for rats? A green snake stalking your grasshoppers?

How to Identify a Shed

To accurately identify a shed, youâ€™ll need more than a simple guide to snakes. Check out a thorough field guide to local snakes, such as Snakes of North America: Eastern and Central Regions, by Alan Tennant and R.D. Bartlett. Color photos show the patterns and help you narrow down the possibilities, but youâ€™ll want to take a much closer look at the drawings and descriptions of scales and compare them to your found shed skin. It might remind you of a kidâ€™s puzzle book with those â€śwhatâ€™s different in this pictureâ€ť scenes, with miniscule differences that are easily overlooked.

A more easily recognizable difference between venomous and nonvenomous snakes is the shape of the head. If the head on the shed is intact and distinctly arrow-shaped, or you can make out a small pit between the eye and nostril, youâ€™re likely to have a venomous snake. Again, the coral snake is an exception in North America.

Color patterns on a shed can be difficult to see if the skin has been exposed to the elements for a while. However, you may be able to see banding on a copperhead or the diamond pattern on a diamondback rattlesnake.

A shed snakeskin must necessarily be larger than the snake that once carried it. The interstitial area between scales allows intricate folds in the skin tissue to relax and stretch when itâ€™s time to let go. Sheds are usually inside out because the snake scoots its way out through the mouth. If you are determined to see a shed as a more accurate representation of the snake, turning the fragile skin right side out is a delicate operation. A dedicated naturalist will carefully photograph the head at each step of the inversion, in case it gets torn or disfigured. To identify the species, you will have to be able to count scales and learn their names in relation to the animalsâ€™ body parts.

Knowing your snakes is a valuable tool for anyone working outdoors. Always take precautions in tall grass or around piles of brush. If you want to encourage snakes on your property but on your own terms, consider piling branches and leaves along a perimeter or leaving some boundary edges purposely unmown. The key is to be intentional about your messes and piles. Stagnant pockets could be a problem, whereas areas that change with the seasons will encourage a normal predator-prey relationship that coincides with abundance and limitation of resources. Take a clue from the minimalist snakes, and use this spring-cleaning opportunity to pay attention to where stuff is accumulating.