How To Make Friends With Your Chickens

For many, backyard chickens are like family pets, and there are some surefire ways to get on the good side of your feathered friends. 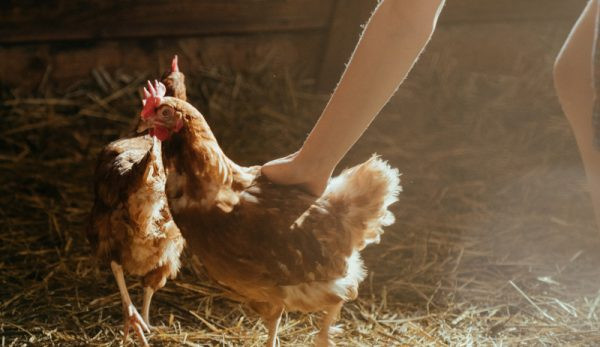 Last autumn, a woman contacted me to ask if I could rehome her rooster. My old rooster died recently of old age. I thought my girls would welcome another guy.

The family had hand raised the rooster, a Sebright Bantam, as a family pet. When he arrived at my home, he settled right in. Heâ€™s a joy to be around, and my hens love him.

Although the Sebright is a calm and docile breed, I think a good part of Rodrigoâ€™s friendliness comes from the way he was raised.

Kelly Jones, author of the childrenâ€™s books Unusual Chickens for the Exceptional Poultry Farmer and Are You Ready to Hatch an Unusual Chicken? has a flock of five hens on her urban farm in Washington. She says that she looks upon her chickens as friends.

â€śIâ€™m not as close to them as I am with my cat,â€ť she says. â€śBut I spend time watching them and I know their personalities.â€ť

She says that before you even start to try to befriend your flock, give any new chickens time to settle in and feel safe with each other.

Last summer Jones introduced three new chickens to her two older hens. She wanted the newbies to feel safe and secure in their new situation before she tried to introduce herself. Jones made sure not to make threatening movements such as looming over them, speaking loudly or moving quickly.

When your flock sees you coming, theyâ€™ll know a tasty snack will follow. Jonesâ€™ hens get a treat every night when they come in to roost.

Make sure youâ€™re feeding treats sparingly, however. Treats shouldnâ€™t take the place of a balanced diet. In fact, chickens will happily fill up on tasty extras instead of their daily ration.

Naming a chicken might seem silly. But just as learning a personâ€™s name helps you get acquainted and changes the way you think about them, naming your chickens makes them feel like friends.

After all, itâ€™s easier to have affection for a Henrietta than just another Wyandotte.

Read more: Do chickens feel? Yes! Here are 4 emotions your flock may experience.

Whether you can hold your chickens or not largely depends upon them. Some accept it easily and others donâ€™t.

Jones doesnâ€™t hand tame her hens, only picking them up if she has to.

â€śInstead, we hang out together,â€ť she says. â€śThey have their own thing they like to be involved in. Anytime I dig or move dirt they will run over to see me. Of course they are more interested in the insects and worms than me.

“I could pick them up at the point, but in general I prefer them to be themselves on their terms.â€ť

To hold a chicken properly, place your hands on each side, over the wings, and lift her up. Tuck the bird, securing the wings, under one arm (she can face forward or back), and hold her shanks between your fingers.

If she flaps or protests, put her down. Only pick her up again if you absolutely must.

Chickens are remarkably easy to train and are very food motivated. Youâ€™ve probably trained your chickens without really knowing it.

Do they come running when you approach the coop with a feed scoop in hand? Or do they watch you as you work in the vegetable garden, expecting to receive a tasty treat, such as vegetable scraps or a tomato hornworm?

Choose a tasty food that they normally donâ€™t receive in their daily diet, such as mealworms. Put them in a bright red or pink bowl, and carry that into the coop. (The colored bowl will teach the chicken that snacks are forthcoming.)

Take the chickens to a certain place, such as a board on the floor, and set the bowl down, removing it as soon as itâ€™s empty. Do this every time your chickens receive a treat, and they will run to that spot when they see the bowl.

You can target train your individual hens by holding out a stick. When the bird pecks it follow that with a treat.

Chickens donâ€™t see us as friends per se because we arenâ€™t part of their social structure. But they do see us as someone important.

Teaching these small tricks will set up a line of communication between you and your flock, allowing the chickens to ask something from you.

Most importantly, donâ€™t try to force your chickens to act like friends.

Some breeds are friendlier than others and are more amenable to being picked up. Some, on the other hand, will never be tamed, no matter how well you raised them.

The closer a breed is to its jungle ancestry, the more skittish they are.

Itâ€™s okay if your hens donâ€™t return your affection. You can show you care by giving your flock the best life you can and admiring them from afar.