Keep your cattle off the grain by paying special attention to the forage you supply them with in the pasture. 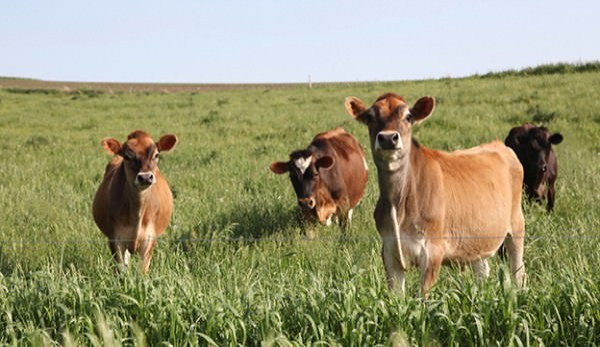 At Buchanan’s Colorado ranch, it takes 20 to 30 acres per year to raise a cow-calf pairâ€”slightly fewer acres than that in the past two years thanks to some much-welcomed rain. “That’s a lot of grass,â€ť he admits.

There’s a reason beef cattle are most commonly finished in feedlots. It’s because most grains have higher protein content than most grasses. It’s easier to pack on the pounds and faster to bring cattle up to market weight (1,200 to 1,500 pounds) when feeding them corn than it is to finish them on forage alone. The growing market for grassfed, pasture-raised meats, the appeal of producing food by feeding meat animals from your land and the health benefits of grassfed meat are compelling reasons to make a small-scale farmer take on the grassfed-beef challenge.

Mix Up Your Grass Selection

One forage type doesn’t rule in grassfed-beef farming. A mix of summer and winter grasses, annuals and perennials that are suited to your climate are the way to go.

Lemke plants a “buffet-styleâ€ť mix on his Texas pastures: Bermuda grass over-seeded with legumes to graze in the spring and summer and Bermuda grass over-seeded with a winter small-grain annual, such as wheat, rye or vetch, to graze in the cool season. According to the American Grassfed Association, feeding cereal-grain crops is A-OK while the plants are in their vegetative state.

With some temporary fencing and a good mix of grasses, you can manage intensive grazingâ€”also called mob or rotational grazingâ€”for a herd of two to 200 cattle.

“When you graze [a pasture] and let it come back before you regraze it, the grass just gets stronger,â€ť Buchanan says.

Too often, a small-scale farmer will get a few cows, let them graze a pasture to the end and wonder why they’re not gaining weight like they should be.

“The grass never has an opportunity to recover,â€ť Buchanan says. “Over time, that’s going to deteriorate the grass.â€ť

The size of lot you need per animal, the length of time you should leave cows to graze it, and the length of time you need to let it rest before re-grazing depend entirely on the piece of land you own, the forage mix and the weather. Grass has the highest protein content just before the seed heads develop, while the plant is putting all of its energy into the stalk.

He rotates his finishing cattle more often than his breeding herd. He says that cows with calves and cows that are not lactating or pregnant don’t need as high a quality of forage, so they can graze up to half of the grass on a pasture. The animals gaining for market weight require more nutrients, and he only allows them to graze one-third of the grass before moving them again.

Pasture irrigation in the dry months and supplemental hay feeding round out the peaks and valleys of finishing cattle on grass, according Lemke.

Animals have an uncanny ability to eat what they need to eat when they need to eat it. Because no piece of land is completely balanced in its vitamin and mineral content, no forage will be, either. Feeding a mix of minerals free-choice will allow the cattle to get a balanced ration. Lemke suggests testing your pasture every year or two to see what it’s lacking and then building a mineral mix based on the results.

Buchanan and his son, Will, had a good experience with feeding minerals when 16-year-old Will entered two of their Angus-Waygu steers in the county fair. Buchanan says he always thought their grassfed cattle couldn’t compete with the “grain-fed behemoths that are 15 or 16 months old and weighing 1,500 pounds.â€ť Wanting to give Will’s animals the best shot at the fair, they worked with a nutritionist at Ranch-Way Feeds to create a mix of AGA-approved supplements, including oat hulls, alfalfa, beet pulp, vitamins and minerals. They fed the resulting 14-percent-protein supplement to Will’s steers in the spring and summer before the fair, and out of the 27 entries, he had the second- and third-heaviest steers thereâ€”1,396 and 1,350 pounds respectively. They both got third place overall for rate of gainâ€”2.99 and 2.91 pounds per day; feedlot cattle gain 2.4 to 4 pounds per day.

“That grassfed supplement mix did better than grains and was cheaper,â€ť Buchanan says. “We, of course, totally banged the grassfed drum.â€ť

Raising grassfed beefâ€”and particularly finishing cattle to market weight on forage aloneâ€”is no easy task, but if you’re up for the challenge, you’ll be a more well-rounded farmer for it. You’ll learn to care for the land first, and the cattle will follow.