How to Make Lacto-Fermented Mushrooms

Whether you grow, forage, or buy mushrooms, this fermentation technique is a nutritious and delicious way to preserve them. 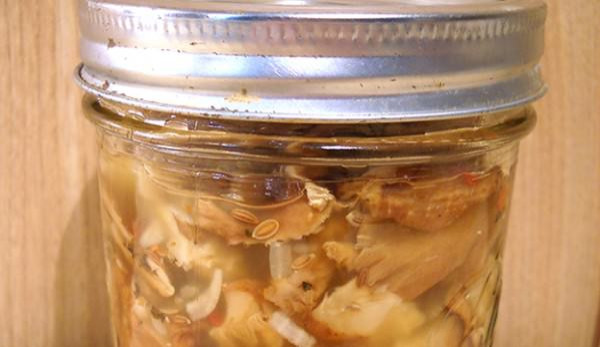 If youâ€™re a fermentation addict like me, youâ€™ve likely tried fermenting just about everything. One food that is often overlooked by fermentation fanatics is mushrooms. I grow my own mushrooms on logs in my yard, so I often have an abundance of gourmet mushrooms. What I donâ€™t eat, I dehydrate for later, but because I prefer to preserve by fermentation as much as possible, I thought “why not try fermenting them?â€ť
Although vegetables are generally best fermented raw due to their natural lactic acid bacteria, which helps initiate fermentation and release beneficial probiotic microbes, there are some concerns to keep in mind regarding fermenting raw mushrooms:

So before you begin fermenting, either cook the mushrooms in very hot (not boiling) water or dehydrate them and then rehydrate them in hot water.

Start by chopping the mushrooms into bite-sized chunks and cutting off the tough stems. Cook them fresh, or rehydrate them by bringing 2 cups of water to a boil, cutting off the heat, and putting the mushrooms in the pan with the lid covered for at least an hour. Allow them to cool and save the liquid for your brine. Be sure to set aside any excess water for soup broth.

While any mushroom can be fermented, this recipe works best for dense mushrooms like shiitake (Lentinula) and saffron milk cap (Lactarius deliciosus). As with any fermentation, the sky is the limit as to the types of herbs, spices and vegetables you want to add to the mix.

A good place to start with fermented mushrooms is this traditional Polish recipe. Ferment in a single quart jar or in two pint jars. For the latter, eat what you want and pack the rest into a single jar to save for later.

Sprinkle a pinch of salt in the bottom of your jar. Add a few mushrooms followed by a layer of spices, and continue layering in this manner until you reach about 2 inches from the lip of the jar. Pack the mushrooms down with your fingers, a spoon or a masher every couple of layers. Cover with water or mushroom broth.

Carefully place a weight, such as a smaller jar or food-grade plastic bag full of water, on top of the mushrooms. Have a towel on hand, as some water may be displaced.

Set the jar in a cool, dark area, and check for fermentation in four to five days. Youâ€™ll know when you hear a bit of fizzing and the mushrooms have a tangy flavor.

You can continue to let the mushrooms ferment for several weeksâ€”even months!â€”but check them regularly, as they will continue fermenting and may attract fruit flies and mold. (If you do find surface mold, scrape off and eat whatâ€™s underneath.) Generally, itâ€™s best to eat fermented mushrooms right away or to cover them with a lid and refrigerate. Theyâ€™ll keep for several months to a year or more in the refrigerator.

The spices and amount of salt used and time left out to ferment are a matter of personal preference. In many traditions, fermented foods are prepared with large amounts of salt, allowing them to sit out in varying temperatures for long periods. Also, flavor preferences are passed down through generations. What may be too salty, too mushy, or too “rottenâ€ť tasting for one person may be a delicacy for another. Start with a basic set of parameters, such as what is outlined above, and from there, experiment to your heartâ€™s content. Youâ€™ll be glad you did.