How To Make High-Quality Soap From Pig Lard

Give lard a chance! This beginner’s guide to making lard soap from pig fat will get you making gift-worthy bars in no time. 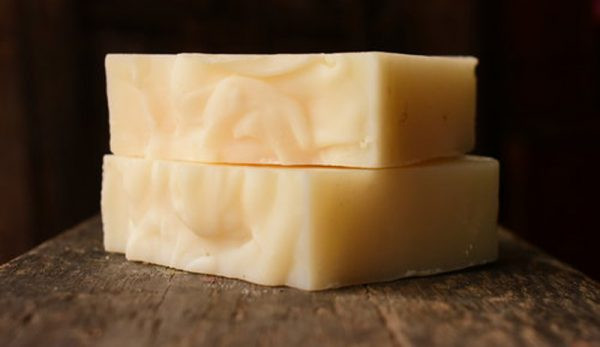 For many years, the idea of making soap at home was too intimidating. Images of soap-makers suited in goggles and shoulder-length gloves, coupled with the skull and crossbone-level caustic warnings made the process seem daunting.

However, nothing soothes trepidation more than several freezers full of lard demanding attention. Thankfully, as it turns out, soapmaking is neither dangerous nor difficult.

Our process keeps it simple. A good bar of soap requires only three ingredients: lard, lye and water.

Far too many experts try to make life more complicated by adding expensive vegetable- and nut-based fats and oils to their soap recipes. When we try to dilute the pure goodness of lard with shea, olive or castor oils, the lard soap gods are displeased and the bars become softer and take longer to cure.

Read more: Oh lardy! Fat brings the flavor back to the kitchen.

If your pig fat is not rendered, you will have to do that first. Rendering involves slowly melting small chunks of animal fat over the stove until it reaches liquid form, then filtering out the brown cracklins and impurities.

Water content of the ultimate product matters. Our meat processor renders our lard for us, and he cooks the liquid fat until enough water has evaporated that it is technically shelf stable. This lack of water ultimately makes a better bar of soap, but is hard to replicate at home without commercial equipment and a water activity meter.

Your best bet is to start with “melted” and increase the temperature of home-rendered lard until satisfied with the bars.

Next, find a good, reliable scale and a good soap calculator to proportion your three ingredients. Our go-to is the Sage Lye Calculator, which has never let us down. Simply type in the amount of lard  in grams and it will walk you through the rest of the soap-making process. We always soap at 5 percent excess fat.


A customary warning when mixing the water and the lye: Always add your lye to the liquid. If you pour water into a container of lye, a caustic lye volcano could erupt in your kitchen. That’s not fun.

The lye and water mixture will be very hot, so use a sturdy container and stay upwind if you can. We use half-gallon Mason jars to mix lye and water.

Melt the fats in a large stock pot on the stove at the same time, and let both cool to about 90-100 degrees before slowly pouring the lye water into the melted fat. Simply apply a stick blender until the mixture looks like pudding. We use the smallest recommended amount of water in each recipe to reduce the time spent immersion blending.

At pudding stage (called “trace”), you can add any scents, exfoliants or colorants if you’re feeling fancy, then pour soap batter into your molds. We prefer these silicone molds from Amazon.

As a quick reference, about 850 grams, or a little less than two pounds of lard, will fill two of these molds, which will make 20 bars of lard. Soap loaves will be ready to cut in one to two days.

Modern soap blogs suggest that cold process soap needs to sit on the shelf for six to eight weeks to cure.

But we’ve discovered old lard soap recipes that suggest that the majority of the saponification occurs in the first 24 hours. And 10 days are more than enough to cure or harden a bar of lard soap.

We’ve yet to burn ourselves with a bar of 10-day-old lard soap.

Read more: Got pigs? Here’s a quick look at putting their fat to good use.

It is important to note that lard soap does not lather like other soaps. That is the one downfall for those used to soaping with other oils. Some folks need bubbles to feel like things have truly been cleaned. It takes some adjustment of expectation.

However, lard soap is a very mild cleanser and our customers’ feedback confirms it is great for kids. It’s also good for those with sensitive skin and eczema.

Pig cells and human cells are very compatible. Similarities in lipid and collagen makeup in fat and skin make moisture more easily absorbed when we use lard soap. That’s why lard soap never dries out the skin. It’s also the best thing we’ve found, ironically, to scrub piggy smells from the skin.

Pure lard soap smells clean. Few odors survive the drastic heat and pH changes that occur during the saponification process. This is great for those who do not want their soap bars to smell like pork or bacon.

This is bad, however, when you are trying to add natural scents to a bar of soap. If you want your bars to smell like flowers or lemons or patchouli, plan to buy oils in bulk (Piping Rock and Bulk Apothecary are good resources) and to use the equivalent of several bottles for a batch of soap.

Cheaper fragrance oils are also an option, but we prefer to keep our body products scented naturally—with the fire of a thousand lemons, for example. Bars can also be mildly scented with a handful of coffee grounds or cocoa powder.

Once you start, soap-making can become quite addictive. Luckily, bars of soap are well-received as gifts and you can fit up to 10 in a Christmas stocking. Enjoy experimenting!