How to Make Maple Syrup

If you have sugar-maple sap at your disposal, transform it into delicious maple syrup for pancakes and more in three simple steps. 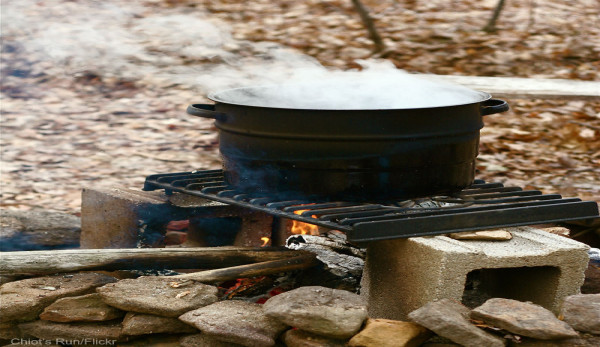 About 15 feet from our basement door stands a giant, old sugar maple that any good thunderstorm could coax into smashing the southern half of our roof. Its shade keep us cool in summer, its leaves become speckled playthings for the kids in fall, and it takes some bite out of winterâ€™s nastiest easterly winds. But our real love affair blossoms in spring, when the towering fortress of squirrels, cardinals and fairies becomes a fountain of sap, the source of winterâ€™s greatest consolation: maple syrup.

After a few years of trial and error in our backyard, making syrup each year has become a late-winter ritual for our family, a reason for us to put down the cough syrup and crawl outside, looking past months of mud and ice for warmer, sweeter times to come. Weâ€™ve learned syrup making, aka sugaring, is relatively simple and easy. For those willing to commit the timeâ€”sugaringâ€™s biggest demandâ€”the process proves interesting and the end product rewarding (and delicious). So if youâ€™ve ever given maple sap extended thought or maybe youâ€™d just love to serve up pancakes with syrup you made yourself, hereâ€™s a basic small-scale reference to help you through the process of sugaring from a few good trees in your own yard.

Step 1: Boil the sap.
Once youâ€™ve collected a couple buckets of sap, start your fire. The ideal setup for a small operation would be an outdoor fire pit with an awningâ€”something in the open air that can run continuously with little risk and hassle. With small children running around outdoors and no real yard space, we use two large stockpots on a side-kitchen stovetop and run an exhaust fan and a dehumidifier constantly to keep the house from becoming a giant cloud of steam. (The first time I boiled sap, I cooked down about 5 gallons in our home kitchen with no ventilationâ€”the house was in a wet fog for a week!)

Find a large, heavy-bottomed stockpot or Dutch oven (or two or three), fill it with sap, set it over the fire, and watch it steam, letting evaporation and condensation do the work. As the sap reduces, simply add more, keeping track of how much sap youâ€™ve boiled and skimming off any debris (leaves, insects, et cetera) that might have fallen into the collection buckets.

The common ratio in syrup making is 40-to-1: 40 gallons of sap make 1 gallon of syrup. This varies somewhat depending on the sapâ€™s sweetness and timing. The earliest sap that flows in colder temps and produces the cherished “light amberâ€ť syrup often exceeds this ratio (more like 50-to-1), and the later, warmer sap that produces more commercial “cooking amberâ€ť often cuts the ratio (30-to-1). In any case, as a small-scale syrup maker with limited resources and many other distractions, boiling about 10 gallons per day to make a pint of syrup is usually manageable, though even those nights get late. Using two Dutch oven-sized pots, boiling down 10 gallons usually takes between five and seven hours, depending on the sugar content of the sap. Large operations can run evaporators constantly for weeks, but for those of us who need sleep, understand your limits and give yourself a stopping point each day.

Starting and stopping the process each day will leave you with overflowing buckets and a lot of sap left to boil on most nights, but thatâ€™s OKâ€”it will eventually become syrup. Store it in a cool, dark, clean place, as sap will cloud and spoil quickly in warmer conditions. Weâ€™ve used anything from clean, sturdy, 30-gallon plastic trash cans to 5-gallon plastic totes to cover and store sap in our basement and garage as it stacks up in the early days of sugaring. Just keep things organized, boiling the oldest sap first. If you become too worried about the sap spoiling, you can drink maple sap straight away, or substitute it for water in just about anything to add a sweet, nutty flavor. For syrup purposes, as long as the sap doesnâ€™t develop a color or odor, boil it. If a few gallons should sour, use it as fertilizerâ€”just pour it back around your trees or on a nice garden spot.

Step 2: Make syrup.
Keep track of how much sap youâ€™ve boiled throughout the day, finishing it off at your chosen sizeâ€”be it 5, 10 or 20 gallons. When youâ€™re ready, stop adding sap and combine all boiled liquids together in one pot to condense. When the sap begins to darken and everythingâ€™s condensed enough to fill the last pot about one-quarter full, itâ€™s time to keep close watch. Attach a standard candy thermometer onto the pot, and insert it into the sap. Heat to 212 degrees F and monitor closely as it continues to rise 7 degrees. Once it hits 219 degrees F, it has become syrup and your boiling is done. Between 212 and 219 degrees F, the sap will begin to foam up, sometimes very quickly. Adding a splash of heavy cream will calm this, or if you want to keep the syrup pure, be ready to move the pot around or adjust the heat to keep it from foaming over.

Step 3: Bottle it.
When the temperature hits 219 degrees F, have sterile pint jars ready and carefully pour the syrup through a metal sieve and/or standard cheesecloth up to about 1/4 inch from the jarâ€™s top. Wipe off any drops from the rim of the jar, and seal it with a standard lid and ring. Leave the sealed jar on the counter to coolâ€”it will seal itself as it cools, with no need to process further in a water bath. (Doing so crystallizes the syrup.) When you hear the seal pop, youâ€™ve succeeded in making and preserving one pint of maple syrup that will keep with or without refrigeration for 10 to 12 months. Congratulate yourself with a midnight toast â€¦ or a pancake.

For backyard sugaring with only a few trees, expect to make anywhere from 1 to 3 gallons of syrup. The syrup is ready to eat as soon as it cools, but weâ€™ve found the flavors, as with pickling, are richer after curing in the jars for two to three weeksâ€”if you can wait that long. And remember, donâ€™t be shocked when your syrup seems much thinner than commercially available syrupsâ€”real maple syrup is runny, and once youâ€™ve had the real thing made from your own trees, it might be the only syrup youâ€™ll ever want to eat.

This article originally appeared in the March/April 2014 issue of Hobby Farm Home.

Brian Landrum grew up working on the family farm and at his fatherâ€™s tractor and implement repair shop.

One reply on “How to Make Maple Syrup”

[…] trees arenâ€™t the only sugar bushes that offer the prime ingredient for delicious syrupâ€”sap can be tapped from birch, walnut, sycamore, boxelder and ironwood trees, as well. Where I […]