How To Manage Cattle During A Drought

Drought is an unfortunate reality, and managing cattle during dry seasons can be challenging. These tips will help you get your herd through a hard season. 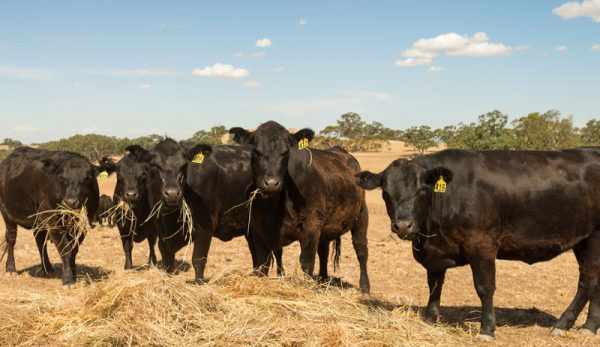 In my last article, we discussed ways to help cattle survive during the summer heat. Today, however, weâ€™ll be learning about how a drought can affect cattle. We’ll also look at what you can do to prepare for it and the best ways to cope during dry weather.Â

When you have reached the point that your area is in a full drought, some tough decisions might have to be made depending on how long the drought lasts. If itâ€™s just for a short period, your two main priorities will be finding enough feed and securing water for the cattle.

A local rancher explained to me that this is why they keep a yearâ€™s worth of hay on hand. By figuring up a rough estimate of how much hay would be needed to keep your animals fed for a year, you can then stockpile hay (or other feed) to keep in reserve. If an emergency comes about later on, you wonâ€™t be scrambling to find feed like everyone else or paying outrageous prices.

If the drought continues to last for a lengthy period, you may have to consider options such as weaning the calves early or downsizing your herd of cattle.

Read more: Get to know the Droughtmaster cattle breed, an animal that thrives when it’s dry.

What to Do for Your Cattle During Drought

There are a few ways you can try to help cattle out during a tough season. How you feed and care for your cattle will depend on where they are (i.e. steers in a drylot, cows out on grass, etc.). For the cattle in a feedlot, some of the best things you can do include:Â

Considerations for Cattle on Grass

For cattle out on grass, you should of course be cautious and keep an eye on them during drought. But if they have a pond with decent water in it, they should be able to handle the heat. If no pond is available, make sure there are a few trees around.

Here are a few things you can consider if you have cows out on grass during a drought:

How to Look for Overheated Cattle

If you find yourself with some extremely overheated cattle, a few things to look for include:

The animals might also pace back and forth trying to find a cooler place. Black Angus are some of the most affected cattle, especially the bulls. Bulls tend to carry so much weight (from muscle, not fat) and have such thick skin that the heat just affects them worse than it would a steer or cow.Â

As you continue to care for your cattle, youâ€™ll run into a few unexpected events along the way. Theyâ€™re not the end of the world or something you canâ€™t handle (even if it requires getting a little help).

Just work to be prepared ahead of time. Keep plenty of hay or feed around, as well as supplies. Know the location of your emergency water sources. And do the best you can with what you have.

Take a deep breath. Itâ€™ll be a new season before you know it.