Beekeeping Basics: How to Move a Hive

Preparation for a hive move happens in two stages: getting the beekeepers and equipment ready, and getting the hive ready. 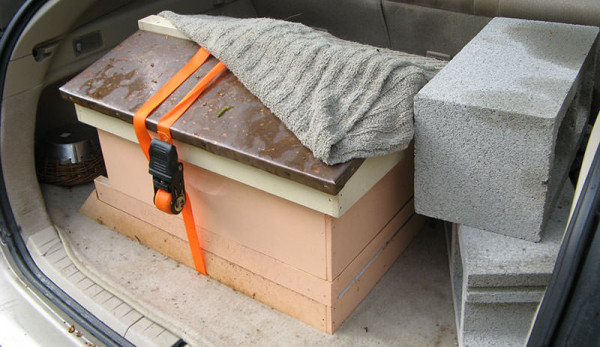 The many ways and reasons to move a hive are as varied as the beekeepers who move them. For large-scale commercial beekeepers, moving hives is essential to pollination and production, but the way you move hives as a small-scale hobbyist differs in scale and technique.

Why Move a Hive?

The general rule is to move a hive less than 3 feet, or more than a mile. The shorter distance takes into account drift from foraging bees. They’ve already oriented to the hive’s position, and a move of less than 3Â feet in either direction will ensure they can still find their hive. A move of more than a mile ensures the bees will orient to the new position and be able to return to the hive. If a move is between those two distances, they will fail to reorient and get lost upon return.

Beekeepers usually move a hiveÂ for personal reasons. Sometimes we move houses or farms, while other timesÂ we purchase established hives from other beekeepers and aim to bring them home. In the beekeeping area where I live, it’s common for local beekeepers to sell established nucleus colonies (commonly calledÂ nucs), which need to be transported back to your apiary once purchased.

You need to establish certain things before even touching the hive. Set up the new location by puttingÂ hive stands in place, erecting electric fencing, and clearing and mowing the area if necessary. FillÂ the transportation vehicle with fuel so that once you’re loaded up, you canÂ drive directly to the destination. Don’t stop if you can help it.

Some vehicles are better for transporting bees than others. Admittedly, I’ve moved bees in a flatbed truck, a family Subaru Forester and a tiny hatchback Toyota Priusâ€”with varied degrees of success. Bees can “leak” from the hive even though it’s sealed, so if it’s inside a vehicleâ€”as it was driving across town in my Priusâ€”any bees that escape will instinctively fly toward the windows trying to find the light. A few leaked bees is not a disaster, but that depends on the kind of driver and beekeeper you are. Maybe keep the bee suit on in the car just in case.

As part of your beekeeper preparation, also have with you any equipment that’s critical to the move. This includes your smoker, bee suit, veil, a strap to tie down the hive, any screens to enclose the entrance or hive top, and a dolly, hand tractor or hive-moving equipment. Some beekeeping catalogs sell hive movers for one or two people. While this is an added cost, these can be beneficial to the small-scale beekeeper who routinely moves hives from one location to another.

Once your vehicles and locations are secured, you’re ready forÂ hive preparation. Split the hive or reduce the weight of the hive if needed. Also, secure the hive with screens along the entrance and the top of the hive because ventilation is critical for stressed hives. Overheating can lead to melted comb, dead brood and injured bees. Finally, secure your hives in the vehicle with a strong, reliable nylon strap before moving.

Planning ahead goes a long way toward an effective hiveÂ move, but it’s really quite simple. As far as livestock go, bees are easy-going and compact in their housing, and they adapt well to new locations. Plan to move them in comfort and without delay so the transition will be easy and uneventfulâ€”very good things when it comes to honeybees.