How to Peel and Seed Tomatoes

Prepare your garden-fresh tomatoes for your next recipe using this simple technique. 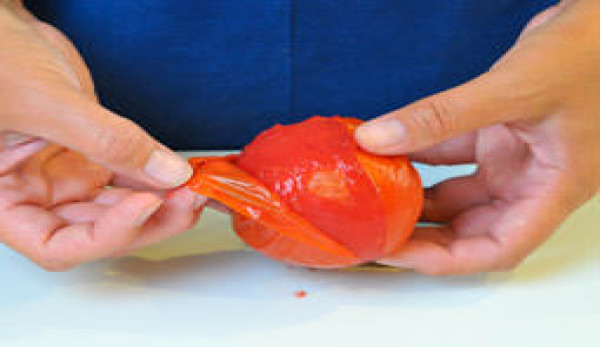 WhenÂ fresh tomatoes first come into season, Iâ€™m so excited that for a while I just eat them whole like an apple, not bothering with slicing or seasoning. Then when Iâ€™ve had my fill, I start taking the time to actually cut them up forÂ salads and sandwiches. But itâ€™s not until the weather gets cooler that I think of cooking them, and then a whole new door opens up into the glory of fresh tomatoes.

Whether preparing tomatoes for a sauce or stew or simply to can, a recipe often requires that you peel and seed the tomatoes first. This can seem like an arduous task, especially of youâ€™re in the midst of meal preparations. Donâ€™t worry; itâ€™s not as difficult as you might think. Use the simple steps outlined below to peel and seed your tomatoes with ease.

Peeling Tomatoes
Place tomatoes in a large heat-proof bowl and boil enough water to cover them. Pour boiling water over tomatoes, and let them sit until the skins split, usually around five minutes. The skins should slip off easily.

Seeding Tomatoes
Core peeled tomatoes and cut into halves (or quarters if tomatoes are large). Place a sieve over a bowl, hold each tomato section over the sieve, and scrape out the seed bed using a small spoonâ€”a serrated grapefruit spoon works well. When finished seeding all tomato sections, use your hands or a wooden spoon to press seeds and surrounding flesh against the sieve to remove the juice. For tomato sauce recipes, add juice along with the peeled, seeded and chopped sections. Otherwise, store tomato juice in a refrigerator or freezer for later use.