How to Prune Raspberry Canes

Last week brought some beautiful weather, and so despite the boot cast on my left leg, I made the most of it by heading out to the raspberry patch to do a little cleanup. 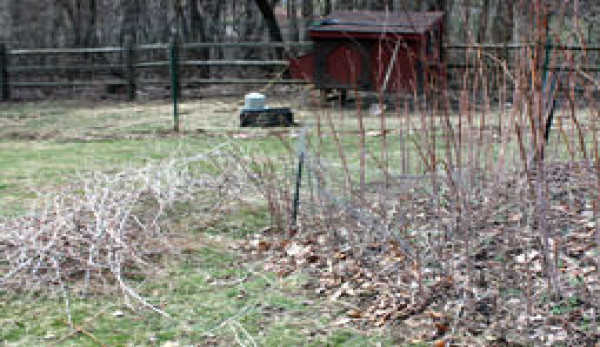 Last week brought some beautiful weather, and so despite the boot cast on my left leg, I made the most of it by heading out to the raspberry patch to do a little cleanup.

TheÂ raspberry patch was started a few years ago from some starter plants I acquired in a plant swap. It has since turned into quite a thicket of canes. I’m not sure of the varieties, but they’re all red, plump, and delicious. Some of the canes are thornless while others are not. (Guess which one I like better, at least when it comes to pruning?)

Summer-bearing raspberries, like Brandywine and Willamette, bear fruit on 2-year-old canesâ€”in other words, on canes that grew from the ground the previous season. Ever-bearing raspberries, such as Heritage, Amity and Summit, produce fruit on both old and new canes. They begin to produce a few weeks later but have a more continual harvest.

I have found that the key to good red-raspberry production is in the pruning. For all types, in March or April, prune all canes to the ground that produced fruit the previous season (you can tell by looking at the end of the cane), and remove any spindly, weak canes to thin the patch.

An alternative pruning method for ever-bearing raspberries is to cut the entire raspberry patch down to the ground in early spring. This is certainly the easiest method, but it yields only one gigantic crop of fruits in the fall and eliminates any earlier production. Both of the varieties in my raspberry patch must be ever-bearing because I always manage to get a long season of harvest all the way until frost. Makes me hungry for summer already!