How To Raise Goats On Pasture

Whether you’re raising dairy or meat goats on pasture, keeping them healthy and happy requires a few essential elements. 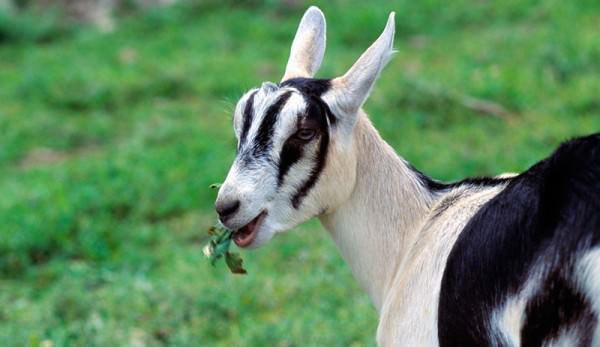 When it comes to eating, goats are more like deer than sheep or cattle, and their smaller mouths and split lips give them the ability to select tasty leaves from amongst thorns, find choice blossoms in what appears to be weeds or brush, and thrive on what would starve a cow. But contrary to the old stereotype, goats will not eat tin cans and people’s red underwear. In reality, they are drawn to the most nutritious plants, including weeds, and the leaves and bark of bushes and trees.

For many of us, the term “pasture” brings to mind rolling grassy fields, but for ideal goat grazing, that picture needs to be amended. You need some good, healthy weeds dotted throughout that picturesque grass!

Kathy Voth, owner of Livestock for Landscapes and the founder and editor of the online grazing magazine On Pasture, has a whole different take on weeds than most people.

“They’re really nutritious and really good for animals,” she says. “The reason animals don’t eat them is because they never have, so why would they start now?”

For goats, Voth’s favorite plant in any pasture is Canada thistle. “As forage, it’s very resilient, propagating from roots and seeds,” she says. “Goats can graze it down, and it’ll come up again. It’s also high in protein, which is a hard thing for animals to get.”

Normally, grasses, weeds and browse should make up 90 to 100 percent of a goat’s diet. If you’ve got a hillside full of poison ivy, wild honeysuckle, briars and whatnot, your goats will be in heaven.

The following list gives us a window into goat grazing habits; it’s provided by Langston University in Langston, Okla., in its web-based training and certification program for meat goat producers and taken from the “Pasture for Meat Goats,” section, written by professor Jean-Marie Luginbuhl from North Carolina State University.

Goats have been observed to:

In most parts of the country, you’ll be feeding hay in the winter. Alfalfa, timothy or some other pasture mix is a good option, fed free-choice up to the amount that they will clean up without wasting. Feeding some hay cubes in addition to hay is fine, but be aware that your goats need the long fibers found in hay and browse to maintain healthy fiber balance in their digestive system. Also, those hard little cubes will need to be softened by soaking in water for a short while or broken up for optimal digestion.

Goats don’t need grain in their diets. However, some owners sometimes do supplement their goats’ browse, pasture and hay. Tree prunings are great, as are kitchen scraps and produce leftovers. Such items can supplement and add variety, but don’t count on them for a significant part of a goat’s diet. If goats always have fresh weeds and grass, they’ll be less likely to go looking for it outside the fence, so use rotational grazing to manage pastures during the growing season.

Keep Feeders Off The Ground

“The nice thing about that is that they’ll pull out a bit at a time and won’t waste as much,” she says. “Also, it’s more fun for them and helps keep them entertained.”

Avoid keyhole feeders. While a goat is eating, another can come along and butt it, possibly causing injury, because the victim can’t get its head out of the feeder in time to get away or defend itself.

“Goats require many minerals for basic body function and optimum production. Providing a complete goat mineral or a free-choice mix of equal parts trace mineralized salt and dicalcium phosphate is advisable under most situations.”

Offer mineral mixes and watch to see that your goats actually eat them. Luginbuhl continues:

Most forages are relatively high in calcium—grass has less than 0.5 percent, while legumes have more than 1.2 percent—so calcium is low only if goats are consistently fed high grain diets. Grass tetany is a metabolic disease associated with low levels of magnesium in the blood. When goats in early lactation graze leafy cereal grains, annual ryegrass or grass and legume pastures which have been fertilized with nitrogen on soils low in phosphorous but high in potassium, some of the higher producing females can be at risk for grass tetany. If your pasture falls into this category, Luginbuhl advocates providing a mineral mix containing 5 to
10 percent magnesium.

Selenium is marginal to deficient in most of the Southeast, so in that area of the country, providing free-choice trace mineralized salts that include selenium is important. Most goats are less susceptible to copper toxicity than sheep. Luginbuhl writes:

“Mineral mixes and sweet feed should contain copper carbonate or copper sulfate because these forms of copper are better utilized by the goat than copper oxide. Grains are generally lower in copper than forages. However, copper levels are of limited value in assessing adequacy unless forage concentrations of copper antagonists such as molybdenum, sulfur, and iron are also considered.”

Luginbuhl goes on to state that forages, especially low-quality forages, often contain less zinc than is recommended for ruminants. However, zinc requirements of goats have not been defined, and little is known regarding factors that affect zinc availability in forages. All this to say: Make a high-quality, goat-specific mineral supplement a staple in your pasture. You’ll want to place it somewhere rain cannot reach—inside a loafing shed, perhaps, or lacking that, in a field feeder with a cover to prevent rain from diluting and ruining the mix. Some owners feed loose salt because goats will eat more, and as a result, drink more water, which keeps them healthier and in the case of wethers, reduces potential for bladder stones, a common malady found in grain-fed neutered male goats.

A Must: Fences That Won’t Budge

Goats are notorious for getting out of their pastures, because to goats, it’s not about escape: It’s about what kind of food or friends can be found on the other side of the fence. They’re not contrary or naughty by nature, but as Voth says, “Goats are very, very smart and very, very curious, and fences don’t really mean anything to them.”

Fences for goats fall into two categories: psychological barriers and physical barriers. Electric fences create a psychological barrier if the goats’ initial contact with it is “shocking” enough. If it only tickles, they won’t be inhibited by the prospect, and it will be largely ineffective. Solar and wired electric fence charger units are both available, but remember: For solar units to work, you must have sun, and goats will take advantage any time the charge is low and, once successful, will remember and keep trying to move into those greener, weedier, unexplored places!

Physical barriers, sometimes in conjunction with electric fencing, can be your best bet to keep your goats where you want them, and with goats, durability is key. Anything that can be climbed will be climbed. Voth has found cattle panels to be the most economical fencing choice. “They’re strong; they’re tall,” she says. “And when you start to make a goat require a lot of effort to jump over something, he’ll be less likely to do it.”

Metal T-posts work well for support, installed not just at each end but in the middle of each panel. Goats will rub on fences, shove their bodies against them when they’re itchy, and without a center post, panels will bend and the wire fasteners may pop off, creating an opening your goats will exploit.

“You need to spend the money up front to do it right the first time because if a goat ever gets the idea that they can get out, your job just became a whole lot more difficult,” Voth says.

The best way to keep goats in their pasture is to be sure they have everything they want inside the fence: food, water, shelter, friends and entertainment.

“I used to say ‘everything they need inside the fence,’” Voth jokes, “but what you think they need and what they think they want are two different things.”

If they can’t get through, they may stick their heads through and try to reach. Kids can get away with this, but a goat with horns may get stuck trying to pull its head back in. Most goats don’t take well to someone pushing on their heads to try and shove them back through; in fact, Voth calls it a recipe for damaged or broken fingers.

“Keep bolt cutters on hand, allowing you to clip one of the wires, bend it up, free the goat, then bend the wire back down,” she advises. “They will never learn. As smart as goats are, they just don’t figure it out. You can’t get angry with them. You just have to accept that this is part of the deal you made when you decided to get goats.”

Your goats will need some kind of shelter to buffer them from weather extremes of cold, heat and wet. It doesn’t have to be a barn; a three-sided loafing shed is sufficient.

“My goats lived in Colorado at below zero temperatures in a three-sided barn,” Voth says, “and they were just fine. It’s when goats get wet and then the wind blows and they get cold; they’re not as good at surviving that as sheep and cows.” But if they have a better body condition, then they’ll fare better, according to Luginbhul.

Shade trees are a great addition to a goat’s pasture, but you can’t have trees inside the fence because goats love them so much they will kill them. They’ll eat the bark or rub their horns on them, so trees outside the fence are great. Periodically throw brush in for them to eat. They’ll eat all the leaves and bark and be entertained for weeks by a big branch.

Goats do best with company. They also love to climb, so give them something high to climb on in your pasture, and it will go a long way toward keeping them happy. Voth gave her goats a big spool once used for wire. Others have utilized everything from an old car body to elaborate multilayer setups. Just make sure there’s no sharp edges, screws or nails, and that you place it far enough away from their fence that they can’t just jump over into new territory.

Goats also love to have something to rub their heads and horns on. They’ll do it on anything that’s handy—bashing around, scratching, rubbing—and they’re not picky; they’ll rub on an old tire or the corner of your new barn with equal enthusiasm.

So there you have the goat grazing essentials: tall, rigid, possibly electrified fences; weeds, grass, and occasional limbs, bark and leaves; clean water; mineral supplements; shelter; something to climb on; and a companion or two. Include all these, and you will have created a caprine paradise!