How To Raise Livestock In Coyote Country

Coyotes are smart opportunists that pose a risk to your livestock, so use these tactics to keep your animals safe. 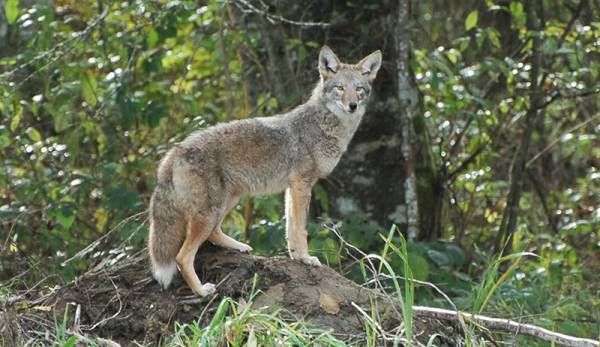 Coyotes (Canis latrans) elicit an almost primal response in farmers, particularly if we have livestock to care for and protect. While beautiful to watch and a benefit in keeping rodents and other small-animal populations in check, the presence of these resourceful creatures can spell big problems on small-scale farms.

Margaret and Bob Hinman started raising Romney sheep for fiber production in 2000 at their family farm in Copley, Ohio, after Bob retired from teaching. ‚ÄúThe coyotes were here when we moved here in 1997,‚Äù Margaret says. ‚ÄúThe coyotes would come up the lane [and] we‚Äôd hear them.‚Äù

But the Hinmans were never overly concerned by their presence. ‚ÄúThere always seemed to be ample rabbits, voles, groundhogs, and [our friends‚Äô] chickens and turkeys,‚Äù she says, noting the predation problems of a friend‚Äôs poultry yard, though it was more common to see a coyote trotting across a field with a groundhog in its mouth.

When their lambs were larger, they typically separated the ones they were keeping in a loafing shed where they also kept their daughter‚Äôs miniature goats; that year they had three in the special holding area. ‚ÄúWe weren‚Äôt shutting them in with the goats,‚Äù she says. Besides the shed, they had run of the area surrounded with a 4-foot-high fence.

They never expected a problem from the coyotes, but when Hinman looked out the window early one morning, things didn‚Äôt appear right in the pasture. That particular year, they were excited by the twin lambs from their favorite ewe, both of which had a nice disposition and excellent wool; unfortunately, those were the ones the coyotes killed, leaving the third lamb alive. ‚ÄúI just remember how disappointed Bob was,‚Äù Hinman says.

The coyotes killed the two, and left the remaining one traumatized. ‚ÄúThe third one was so paranoid, we brought over the wagon and took him back to the barn,‚Äù she says. Those coyotes never ate the sheep, which puzzles her, along with how dexterous and clever they were to make it into the pasture at all. ‚ÄúWe tried to figure out how they got in. They had to have jumped on the loafing shed roof,‚Äù she says, though coyotes have been known to scale fences almost like people when they are inspired.

‚ÄúWe watched for the coyotes to come back,‚Äù she says. ‚ÄúThey started up the field, and Bob went out with the shotgun.‚Äù

In that same year, a trapper in the area caught well over a dozen coyotes, further reducing the number, but it still caused the Hinmans to ensure the sheep, both the lambs and full-grown ewes, were locked up every night.

It became their normal routine without exception.

Coyotes On The Hunt

Predators often come as a surprise to many small-farm owners. John Steuber, Montana state director of wildlife services for the USDA Animal and Plant Health Inspection Service in Billings, frequently assists farmers and ranchers of all sizes to implement ways to protect their animals.

‚ÄúHobby-farm owners are often not used to protecting livestock or protecting chickens,‚Äù he says. And with a plethora of tasty little morsels in the form of not only sheep, but any type of poultry, miniature horses, cows or goats, including fainting goats (which must be a coyote‚Äôs dream), farm owners have to take measures to ensure the safety of their livestock.

‚ÄúAll of those animals are susceptible to coyote predation,‚Äù he says. If it‚Äôs free-range or minimally enclosed, it‚Äôs at risk.

Most of the time, the coyotes kill to consume their prey, but there are occurrences of taking advantage of an opportunity when they kill what is accessible. This instinctual act isn‚Äôt malicious. The unfortunate animal is simply there.

While coyotes are visible and active during the day, especially if there isn‚Äôt a lot of human activity in the area, they do a fair amount of their hunting at night when domestic animals are more vulnerable. Unlike wolves, usually only one or two are on the hunt instead of an entire pack, yet they are incredibly smart and adaptable. If there‚Äôs something they want, they can usually figure out a way to get it.

Locking up the livestock like the Hinmans did is certainly a viable option to keep them safe when you‚Äôre sleeping, but depending on the situation and the size of the herd, it‚Äôs not always practical.

‚ÄúMost of the hobby farms are small acreage‚Äîthe best thing is electric fencing,‚Äù Steuber says about protecting your livestock from a coyote attack.
¬≠
Whether using a powered netting or high-tensile wire strung around an area, powered by a solar charger or a standard plug-in unit, electricity is the most reliable form of protection. It‚Äôs regularly used throughout Montana to protect against grizzly bears, and if it can deter the bears, it can do the same with coyotes.

Steuber and other predator experts are also experimenting with turbo-fladry, an electrified flagging material that provides a visual deterrent to the predator, whether coyote or wolf. ‚ÄúThe first thing a coyote will do is sniff it, and then they get a pretty good jolt,‚Äù he says.

Utilizing this method is similar to training a domestic dog to the invisible fence. During a typical training session, the owner sets up flags to allow the dog to know the line. With the turbo-fladry, the red flagging provides the same warning, and studies have shown that predators that received a shock will not cross it for some time even when no power is present.

For farmers looking for something other than a fence, another option includes acquiring some sort of guard animal, whether it be a specialized dog, donkey or llama. It‚Äôs important to note that not any breed of canine will do an adequate job protecting a flock because coyotes are known to kill ‚Äúregular‚Äù domestic dogs quite easily. Some of the popular guardian breeds include Great Pyrenees and the Komondor from Hungary, known for its mop-like, heavy fur coat.

Unlike an electric fence, guardian animals require training and maintenance, as well as a significant time investment‚Äîsometimes years‚Äîto become large and competent enough to be out with the herd or flock. They are best considered a long-term solution instead of a quick remedy, but they‚Äôre another piece of the potential predator solution.

Despite those early losses, Hinman doesn‚Äôt wish coyotes ill will. ‚ÄúThey‚Äôre not a threat to me,‚Äù she says. As a matter of fact, she watched a young one attempting to play with her beagle, Ruby, one day near the fence line. It was a young coyote posturing playfully until Hinman was able to shoo it away. She has since taught their dogs to stay away from their canine cousins.

Because of their intelligence, it takes vigilance to outwit them. Be sure your poultry pens are well-enclosed, close up animals at night and, if they are in the pasture, string an electric barrier around the group to protect the more vulnerable ones. It takes more work, but it‚Äôs possible to have a successful small farm in coyote country.

This article originally appeared in the September/October 2016 issue of¬ÝHobby Farms.