Rotate out your pig herd and replant the pasture with cover crops that will fix the trampled soil and provide a new dose of healthy forage. 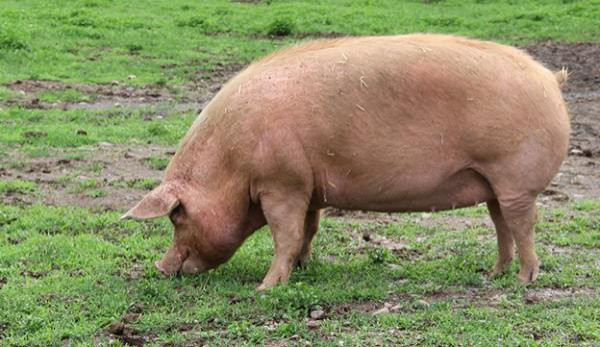 Visit any farmers market or natural grocer’s meat counter, and you’re sure too see one magical word promising both soil-friendly sustainability and markedly improved taste: pastured. While the term’s definition isn’t set in concrete, covering everything from rolling acres to managed drylots, there’s no doubt the lives of many chickens and, perhaps more notably, pigs have improved greatly in recent years as farmer and consumer choices bring conventionally sheltered animals back out into the sunshine.

The Challenge With Pigs On Pasture

While many pastured poultry growers operate on a standard, portable-pen system, pasturing pigsÂ can present a bigger challenge because, when given the chance, these large animals will root and compact a luscious patch of green pasture into a mucky, barren landscape in no time.
Applying hog rings to the animals’ noses can help subdue rooting behaviors, but many farmers eschew this tool: Nose rings are challenging to apply and reapply, the effect is pain-based, and they curb a pig’s natural instincts. If you’ve ever seen a pig root out a mouse nest, you’ll understand how this inclination can be beneficial, especially considering the animal’s proficiency at clearing soil of grubs, grass, roots and rhizomes.

In short, if you raise hogs, at some point you’re probably going remedy a pasture thatâ€™s been beyond natural repair. It may be a car-sized wallow miraculously excavated in a minute’s time or a vigorous clearing that greatly exceeds expectations, but the fact of the matter is that pigsâ€”intelligent creatures with total disregard for farmer safeguards against erosion and soil degradationâ€”love to tear stuff up.

An intensive rotation schedule is ideal for both soil and pig health, but space and time constraints can often beset best-laid plans. However, well-chosen perennial cover crops will help aerate soil and balance out nutrients, helping damaged ground return to healthy pasture for future herds.
Before reseeding a spent pasture, it’s important to get in there and work the land. Tillage will eliminate a lot of damage caused by rooting and wallowing, and a good till will spread manure around. Harrowing will do even more to this endâ€”remember, pigs tend to choose â€śtoiletâ€ť areas where manure will be concentrated, and because one hog can produce up to 80 pounds of manure per day, disseminating this fertilizer is a big step toward healthy pasture.

Pigs flip sod and root with wild abandon, so it’s natural to think of them as power aerators, but a 300-pound animal repeatedly moving over confined areas also poses serious risk of soil compaction to lower layers; higher stocking rates exponentially increase this risk. A used pig pasture will likely need some considerable soil aeration, and few plants are better suited to this task than alfalfa, a popular forage crop in the pea family.
With its long, incredibly strong taproots (it’s said an alfalfa taproot can break rocks), alfalfa will easily bust through trodden soil, opening the ground back up for efficient irrigation and nutrient flow. Alfalfa is a notoriously fertilizer-hungry crop, requiring fertilizer application to meet its potassium and phosphorus needsâ€”a trait that meets the needs of pig pasture remediation well. Pig manure (feces and urine) contains all 13 of the nutrients required by plants, so a stand of alfalfa should grow well, thereby improving soil health in a hog-spent area. It should be noted that alfalfa performs best when planted via a seed drill.

Soil erosion is a serious concern in hog pasturing situations, as all that rooting and flipping opens the ground to serious runoff after a good rain. It’s arguable that soil washed away is a constantly renewing layer of waste and manure, and a catchment area of unmolested grass on the drainage end can be a big help, but loose, bare soil is a troublesome sight. Reestablishment of a dense root network is key to locking soil in place.
Planting rye grass quickly protects against soil loss through erosion. Germination generally takes seven to 10 days with sufficient watering. Rye should be planted between August and Septemberâ€”though some seed can go in as late as Octoberâ€”and can either be drilled or broadcast successfully. Other benefits of rye grass include weed suppression and increased retainment of all that nitrogen from the hog manure.

The end goal of pasture remediation is, of course, healthy land packed full of highly nutritive feed for future animals. While grass is a valuable supplement to a hog’s diet, the only pasture-based crops touted as a potential for full feed replacement in growing out hogs are plants in the legume family, as they provide higher levels of protein, calcium, carotene and essential vitamins than grasses.

Clover, like alfalfa, is a common pasture legume, though it’s considered superior in nutritionâ€”there’s a reason for the old adage, â€śHappy as pigs in clover.â€ť Of all the clover varieties available, lardinoâ€”a white clover up to four times larger than common white cloverâ€”is considered best for pastured hog operations, as it produces better yields and holds up to porcine foraging better.

Of course, the plants listed above are neither exclusive nor exhaustive. A mix of alfalfa, rye, clover and/or whatever else strikes you as having potential would improve damaged soil and produce a healthy, delicious pasture for future packs of pigs to wander through, dining on flowers and leafy shootsâ€”and wrecking things like only a pig can.