How to Read a Seed Packet: What the Details Reveal

Learning how to read a seed packet reveals important data to help you become a successful grower. Our guide walks you through it all. 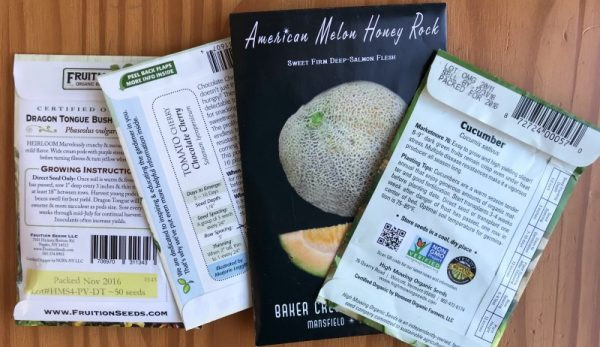 As seed-starting time approaches, many gardeners are busy organizing their seed packets and making a plan so they know which seeds to start when. This process is far smoother when you know a few facts about the seeds you’re planning to start. Learning how to read a seed packet is key to successful seed-starting efforts.

Why You Should Always Read the Seed Packet

In addition to filling you in on the varietal name and features of a particular plant, the seed packet also has a wealth of additional information that’s particularly important at seed-starting time. Reading the seed packet means you’ll be privy to important facts such as the date the seeds were packed. This can help you determine whether you should purchase new seeds or plant older ones that you already have on-hand. While some types of seeds last for many years under proper storage conditions, others loose their viability after just one or two years. Knowing the packing date can help you determine how long to hold onto them.

Seed packets can also tell you if the particular variety housed inside of it is an award winner, which may convince you to plant extra! Award-winning varieties, such as those that earn an AAS (All America Selection) Award designation, are typically trialed by growers across the country for their production, disease resistance and other important traits. If the seed packet displays an award designation, there’s a good bet it will produce a successful crop.

Another reason why it’s important to learn how to read a seed packet is because it will also tell you whether it’s best to plant the seeds directly into the garden, or if you need to start them indoors, under grow lights. Don’t waste your time and money starting seeds indoors if they don’t need to be. Vegetables such as beans, peas, cucumbers, melons, pumpkins, lettuce, beets, carrots and more are oh-so-easy to start by directly seeding them into the garden. Yes, you can get a jump-start on the growing season by starting them indoors a few weeks early, but it isn’t necessary unless you live in region with a very short gardening season.

Seed packets may also inform you of any noted disease resistance for a particular variety. While this information is more typically found in the seed catalog, some companies note it on their seed packets as well. Disease resistance is often indicated by code letters somewhere before or after the varietal description. For example, a PM means that variety is resistant to powdery mildew or a FW notes resistance to fusarium wilt. There are many plant diseases that are indicated through a code. More on what this means here.

How to Read a Seed Packet

Learning how to read a seed packet isn’t hard, but there is some variation amongst seed purveyors. They don’t all list the same information, nor do they list their information in the same order. But, in general, most seed packets have the following details you can take advantage of to have a successful seed-starting season.

This number represents the number of days it takes for the plant to go from seed to maturity. This is an important number to determine how long it takes a particular variety to begin to produce. Long-season crops may not produce before fall’s first frost in northern climates, so it pays great dividends to pay attention to the Days to Maturity for a particular variety and select one with a lower number. This number can also help you determine when a fruit or veggie is ripe. For example, it can be difficult to know when a watermelon, cantaloupe or winter squash is ready to pluck from the vine. Counting the Days to Maturity forward from the date of seed planting can help you determine when it’s a good time to pick.

Some seeds take weeks to germinate while others take only a few days. Adding the Days to Germination with the Days to Maturity can further narrow down maturation dates for particular crops. It’s also useful when seed starting. This info can prevent gardeners from panicking about why it’s taking so much longer for their peppers to germinate than it’s taking their tomatoes.

Also noted on most seed packets is the proper seed planting depth and seed spacing for that variety. Pay attention to these requirements as some seeds will fail to germinate if planted too deeply or not deeply enough. Proper spacing is also required to give each plant plenty of room to grow and limit the need to thin out extra seedlings down the line.

Seed packets will also tell you the best time to start seeds of that particular variety and where best to do it. Often indoor seed-starting directions are provided on the packet, noting details like whether or not a seed should be started 4 weeks before spring’s last expected frost or 12 (or any number of variations of those details). As noted above, seed packets will also tell you whether direct seeding or indoor seeding is best.

Knowing how many seeds are in a packet is critical. You don’t want to buy or start more seeds than you’ll need, nor do you want to run out of seeds halfway down a garden row.

Often when learning how to read a seed packet, gardeners forget to pay attention to the extra details. Many times seed packets will inform growers of whether or not a plant needs to be trellised or staked, if the developing fruits need to be supported, how to check for ripeness or whether or not they’re a good choice for containers.

As you can see, figuring out how to read a seed packet can reveal a wealth of important facts for seed-starting gardeners. Pay careful attention to what’s included in its text and enjoy an extra productive gardening season.