How to Rehab Your Soil After a Flood

Clean up your land and get growing again as soon as possible with these five tips for dealing with flood damage. 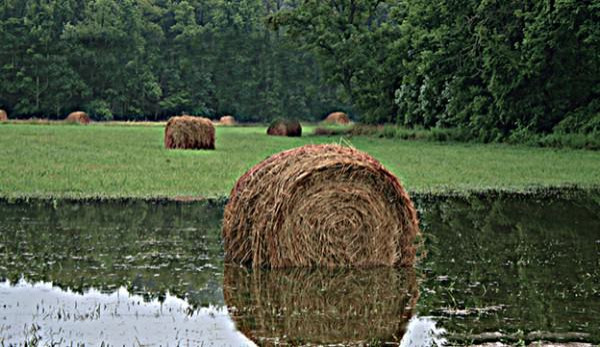 When Richard Krott and Belva Lotzer of Tizer Botanic Gardens and Arboretum woke up on the morning of June 7, 2011, their landscape had literally changed. The usually docile Prickly Pear Creek that quietly flowed outside of their home in Jefferson City, Mont., turned into a raging torrent overnight, tearing through their property and uprooting plants, trees and shrubs.

“The flood waters cut several channels more than 2 feet deep in an area of about 150 feet wide and 450 feet long,â€ť Krott says. “One stretch of the creek bank that was 6 feet wide and 7 feet deep and 150 feet long was completely washed away. FEMA estimated more than $225,000 property damage. An unknown dollar amount of trees, shrubs and perennials were lost. There were thousands of plants in all washed away.â€ť

Two out of the 4 acres of their property were affected by the flooding.

“Water always wins,â€ť says John Wilson, extension educator at the University of Nebraska-Lincoln, quoting a saying he heard on a home-improvement radio program. After dealing with the long-term problems resulting from the devastating floods along the Missouri River in 2011, he is only too familiar with the consequences of flooding in agricultural settings.

The healing process for the land after such an event primarily depends on the severity of the flooding and the extent of the damage. Dealing with the aftereffects of a flood is never easy. Not only is your growing plan permanently changed, but oftentimes the entire landscape, as well. Take these steps to ensure a healthy and productive season once the water recedes.

The first step on the to-do list after a flood is cleaning up what the water brought to your growing area.

“We found center pivots were great for catching debris,â€ť Wilson says. The main problem they experienced from the flooded Missouri was displaced logs and larger debris, including a few cabins.

In some areas, there was a significant amount of plant residue. When corn stalks and other plant materials are deposited at 4 inches deep or less, growers can typically till them into the soil, though Wilson caution that this can temporarily cause artificial nitrogen deficiency. As the carbon-rich plants break down, nitrogen is tied up in the process, providing less to the growing plants.

In areas with more than 4 inches of plant debris, Wilson recommends spreading it out to dry before hauling it away or burning it. However, you can use some of the debris to help repair your land. Instead of hauling all of the branches, uprooted trees and shrubs away, Knott says they covered it with a base of gravel and a homemade topsoil mix made from 20-year-old manure, wood chips and sand. They used over 150 cubic feet of the mix to repair the area.

There are times, even after weeks of dry weather, when areas simply donâ€™t dry out as they should after a flood.

“If someone has standing water on their lawn or garden and want to get rid of it more quickly than Mother Nature does, simply install a pump below ground level,â€ť Krott says. He installed sump pumps 2 to 3 feet deep and ran them for several months to move the standing water out of planting areas.

Remember, after a flood, the water table might be changed permanently, so use caution when digging. Knott says if he jumped on a shovel on certain areas of his land, he would hit water.

One of the greatest hazards after a flood is the harmful bacteria water brings with it. If septics or municipal waste systems are impacted in your area, you have to be particularly careful. If a flood ran through a growing area of something normally eaten raw, such as spinach or other greens, pitch the plants. Cooking produce should eliminate pathogens, though if the water is filled with other types of pollutants, such as oil or industrial products, the food could still be unsafe.

As a guide, consider the requirements of the National Organic Program, which requires a 120-day waiting period before harvesting any food that comes in direct contact with non-composted manure (this includes human waste in the case of a flood). Always err on the safe side. Itâ€™s not worth becoming terribly ill over a carrot.

Water moves a lot of soil, whether it takes it away completely or deposits it where you donâ€™t necessarily want it. The major chore after a flood if trying to reassemble your landscape as close to the original condition as possible.

For minor sand or other sediment deposits 1 to 2 inches deep, you can till it into the soil normally, Wilson says, but as depths increase up to 8 inches, more rigorous plowing is needed. Multiply the depth of the sand by 1.5, and thatâ€™s how deep you need to till. For example, a 4-inch sand deposit needs to be tilled 10 inches deep. If you allow a layer of sediment to form, it will hurt root development and water infiltration.

After the Missouri flooding, some farmers had sand 15 feet deep, while others suffered erosion issues where channels were dug into new areas, Wilson says. For severe issues like these, you have to bring in the big equipment. Dirt scrapers, excavators and bulldozers become your best friend when you have to move hundreds of tons of dirt deposited where you need to grow crops.

Farmers were able to use the excess sand from some areas to fill in swirl holes or gullies in others. They filled the recesses with sand to within 3 feet of the native soil level, then brought in topsoil to finish filling in the depression. Krott and Lotzer used some of the streamâ€™s re-landscaping effort as future flood control.

“We left one major washed-out new channel in place and are now using it as an overflow diversion in case of future flooding,â€ť Krott says. “We lined the walls of it to prevent bank erosion.â€ť

Once the soil is put back into place as best as possible, itâ€™s time to rebuild the soil with cover crops.

“In general, as far as cover crops go, the grassy cover crops help more with soil stabilization with their fibrous root system,â€ť Wilson says. Cover crops with long taproots, such as turnips, oilseed radishes and winter peas, do a better job of water infiltration. Often a mix of the two is needed, and itâ€™s best to work with your local extension agent to determine the best crops for your area and season.

In long-term flooding situations, where thereâ€™s standing water for a month or longer, there are serious issues with the loss of the valuable microorganisms, Wilson stresses. Known as “flooded soil syndrome,â€ť the lost microorganisms results in phosphorous deficiency, and the proper cover crops can help remedy that, improving future crop yields.

Get more help preparing your farm for natural disaster: