How To Restore A Hayfield To Full Production

It's not uncommon for old, unworked fields to fall into disrepair, but it's possible to restore an old hayfield following these basic steps. 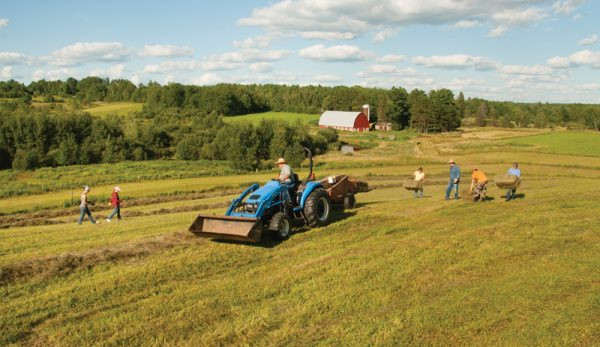 Itās a common occurrence when folks buy rural property. They discover acres and acres of older hayfields that have been let go for years. Now the fields are full of weeds and small trees with the rest of the forest encroaching on the edges.

Considering the effort that early homesteaders must have put into clearing the land and originally building up the soil quality and sod, itās a shame to see all that work going to waste.

Whether the original crop was timothy, alfalfa, clover or some other type of hay, restoring these fields to productivity is certainly possible. But it requires some effort and a little bit of planning.

Letās take a look at the process needed to restore a hayfield.

There are many reasons why an older hayfield might have been abandoned. Perhaps a farm property was sold and used for a nonfarming purposes such as hunting. Or perhaps the original family was no longer able or willing to farm the land, and the fields were left dormant for a decade or more.

Whatever the reason, a period of five to 15 years is plenty of time for trees, weeds and rocks to take hold of the land. That makes it unsuitable for farming.

The severity of the unwanted growth depends on how long the field has been neglected and how aggressive the invading flora is. For this article, weāll assume that the field is overgrown and unsuitable for hay equipment but still recognizable as a fieldānot a forest.

Here are some of the common obstacles you might find when you set out to restore an old hayfield. 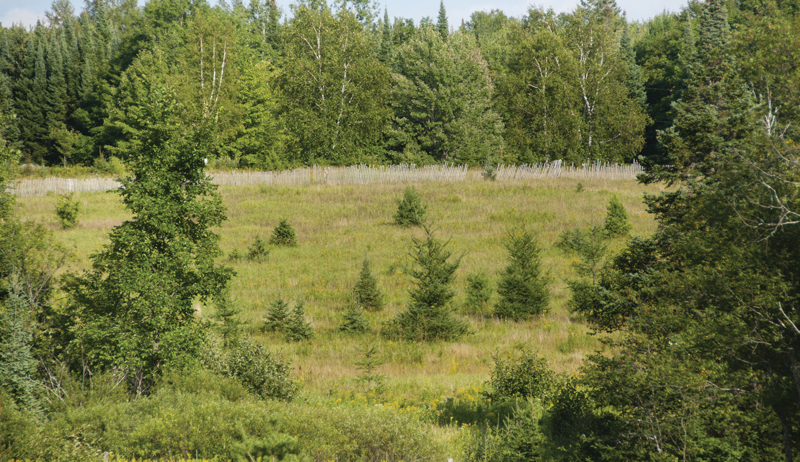 Fast growing, āpioneeringā trees such as quaking aspen, birch, green ash and many coniferous treesāpine and spruce, for exampleāare often among the first trees to encroach onto vacant hayfields.

Naturally, when the field is in use and cut each summer, it keeps these trees at bay. But if given a chance these species move in quickly. Aspens, in particular, can be aggressive because multiple trees are sometimes interconnected underground through their root system.

If there are any large trees surrounding the edges of your field, make a careful inspection for any old logs or large branches that might have fallen into the way and are buried under tall weeds.

Besides trees, smaller brushlike plants also begin to invade. Look for plants such as blackberries, raspberries and burdock, as well as troublesome weeds such as thistles, buttercup and milkweed.

Even nontoxic weeds such as dandelions and daisies can be a problem if they take up space that quality grass could use.

Frost action tends to continually raise small rocks to the surface. Youāll need to clear your hayfield of these troublesome objects.

Rocks can cause a great deal of damage to machinery. However, if the sod is thick and you donāt plan to till the field, small rocks might not get to the surface.

Also, be aware of boulders that were too heavy to move and intentionally left behind by the original landowners. After a few years, the tall brush and weeds might have hidden them. Carefully examine the field on foot and mark any boulders.

Also, watch out for rock piles, which, although usually concentrated on the edges of fields, could be somewhere in the middle.

Barbed wire might have helped tame the West, but it wonāt be kind to your equipment in the event of a direct hit.

Running over an old strand of it with your tractorāor worse, your brush hogāis bad news. Carefully scout suspected areas on foot before moving in with machines.

If you have neighbor kids that have run their ATVs in the old field, watch for old ruts from these as well as trucks and machines.

You never know what other people might have left behind in the hayfield, long buried by weeds and tall grass.

You might find old harrows, discs, trash piles or stove pipes. Take some helpers with you to scout the field before work begins.

Start With the Obstacles

Before you bring in farm machinery to rework the field, remove the large obstacles first. Get rid ofĀ  downed logs, any tree with a diameter larger than what your brush hog can handle and large rocks. Such an initial evaluation is necessary to help determine what equipment youāll need to summon.

For very small trees less than 3 inches in diameter, youād be surprised how quickly an area can be cleared with nothing more than a few people, a chainsaw and a trailer to haul out the brush. Try to cut off the trees at or below ground level, if possible.

(The mowing process, later on, prevents them from growing back.)

But obviously, if your aim is to restore a large hayfield thatās filled with many small trees, larger machinery such as a bulldozer might be necessary to shorten the time required, although this can damage the sod.

For large rocks here and there, you might can handle the job with the front-end loader on your tractor. Or you might need a larger machine such as a bulldozer.

Another option, of course, is to do what the original farmers did. Leave the rock where it is, put up a flag to mark it and work around it. 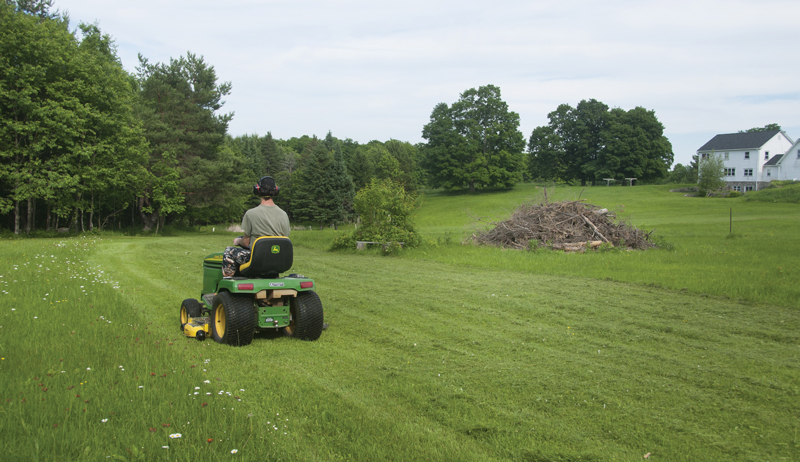 Once youāve dealt with the major obstacles, you can immediately begin improving the hayfield by mowing it repeatedlyāpossibly several times a year.

Presumably, your initial pass will be a rough cut, done with a brush hog to help take down the tall weeds and brambles. But after that, you can do a finer job, with the mower blades close to the ground.

The nice thing about this part of the renovation process? Itās a relatively easy task. Compared with moving rocks and hauling brush, riding on the tractor and mowing is pleasant indeed.

Repeated mowing does a few beneficial things. It stunts the growth process of larger woody weeds and unwanted wildflowers. But at the same time, it promotes the growth of the grass species that you do want.

If a weed is mowed down each time it tries to re-grow, the theory goes, it eventually runs out of energy in its root system and dies. This doesnāt happen with grass, of course. So mowing eliminates unwanted species while saving the good ones.

In fact, itās quite possible to bring back a hayfield without tilling up the established sod baseāespecially if the field was used within the past few years.

Clearing the field of debris and mowing it are the first steps. While the field might look much better than it has in years, a few steps remain to fully restore the hayfield.

Odds are, the soil of your hayfield has become overly acidic. ThisĀ  encourages further weed growth, so a soil test is a smart idea at this stage.

If your field is too acidicāwhich it probably isāplan on applying lime to it.

While itās true that the decaying plant materials have been decomposing on your field for years, the field could still probably benefit from proper fertilization.

Once the soil pH and nutrient qualities are under control, you can reseed the field with a hay grass that you prefer. This further helps stem the growth of weeds.

Frost seeding can be done in the late winter or early spring, when natural processes help work the seeds into the ground, even without tilling. Choose a grass species that germinates in cool temperatures. 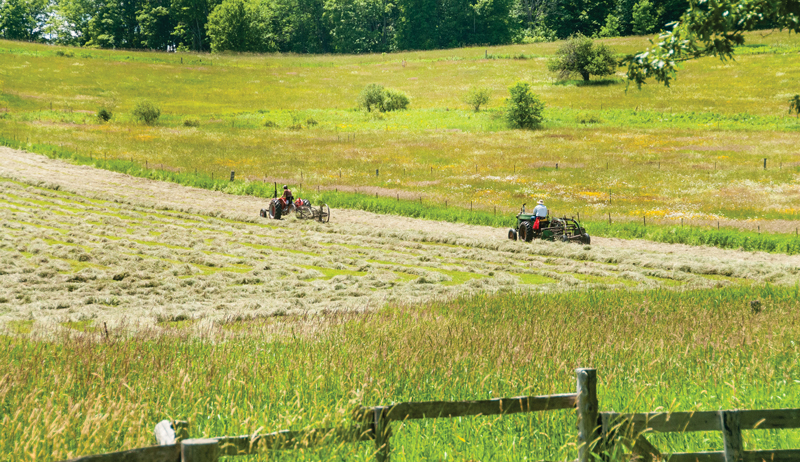 If a fieldās condition is poor and these steps arenāt enough to bring it back, you might need to consider tilling the entire field and reseeding from scratch.

This can get expensive quickly if the field is large, and you might need to use a rock rake for all of the small stones you uncover. But the results might be worth it if you can restore the hayfield to productivity.

While you might need to tillāand even apply herbicidesāto control very difficult weeds, you might want to leave the existing sod and control the weeds through mowing and frost seeding, if possible.

All in all, itās a lot of work to bring an old hayfield back into production, but itās a rewarding process. You can profit from the hay crop and increase the valuable working size of your property. And youāll be satisfied knowing the old farm fields will remain productive for years to come.

If you want additional acres to hay but arenāt necessarily interested in purchasing more land, consider working out a deal with a neighboring farm. You might find someone nearby who doesnāt want their older fields abandoned but can no longer care for them.

In exchange for your work to restore the hayfield and the haymaking itselfācutting, raking, balingāyou get the hay crop (or at least part of it).

In the right situation, this can benefit both sides. The landowner can keep the farmland more valuable and looking nice, while you get to farm additional acres.

Sidebar: Google Earth to the Rescue

Some versions of Google Earth allow users to view historical aerial imagery of a particular area, sometimes going back a few decades. If the historical images of your property are of high enough quality, this could help you learn where certain large obstacles might lurk.

Lost fence lines or junk piles might not be obvious now. But they might be clearly defined in photos from 20 years ago. The historical images can also help you identify the areas of the property that were in use most recently. This might help you decide which hayfield to restore first.