How To Safely & Humanely Handle Sheep

Sheep handling can be tough for the unskilled, but here are some tips to keep both you and your animals safe. 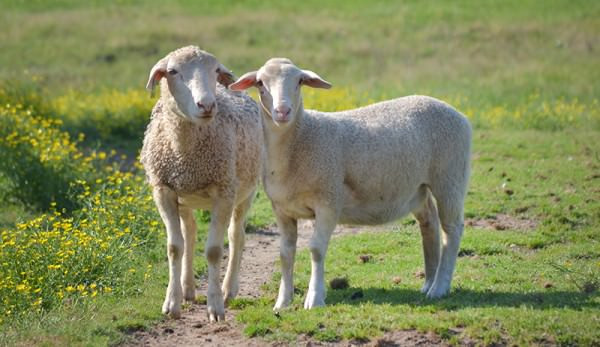 Many folks are afraid to handleâ€”and sometimes even touchâ€”their sheep. They worry theyâ€™re not strong enough or that theyâ€™ll hurt the sheep, themselves or both, especially if the sheep is a ram or has horns. Itâ€™s smart to be wary of and aware around livestock, but safe, humane handling techniques and a few key tools can help you manage most sheep handling required on a small farm.

Handle Sheep Only When Youâ€™re Calm

At the risk of sounding mystical, Iâ€™d contend that human demeanor matters a great bit in sheep handling. A wiser shearer than I put it best when he said:

â€śSheep were born to be afraid. Itâ€™s how they survive. Theyâ€™re operating on a different plane of perception because they have to. If youâ€™re freaking out, they know it.â€ť

Iâ€™ve found this to be true. On a few occasions, Iâ€™ve arrived to a shearing job to owners saying, â€śI donâ€™t know what to do! We canâ€™t get near the pen. He stamps his foot at us.â€ť They then proceed toward the sheep, arms outstretched, calling, â€śItâ€™s going to be fine, youâ€™ll be fine. Nothing bad is happening!â€ť Itâ€™s obvious to allâ€”sheep includedâ€”that nothing is normal.

Other folks rile sheep up in an effort to rally their confidence. They whistle, clap, chase and holler â€śCâ€™mon sheep! Whoop whoop!â€ť or make other startling noises, and the sheep panic.

Itâ€™s important to not handle sheep when you are worried, irritated or afraid. Sit near the sheep for a while, and get used to each other and the idea before you do anything. A day when nothingâ€™s going right is not a good day for sheep handling.

When it is time to move, begin by moving sheep into as small a space as possibleâ€”for several sheep, a 6-by-6-foot space or smaller is ideal. This way, they canâ€™t work up speed or get away from you, and theyâ€™re easier to catch as a result.

Movable livestock panels are your friend in this endeavor, though a herding dog is your best friend. If youâ€™re wary of certain sheep, walk toward them while carrying a portable fence panel in front of you. This creates a protective barrier between you and the sheep.

If you can manage, carry two panels folded together flat while hinged or pinned, which can form a corner when unfolded. Try to walk the sheep into an existing corner. When there, add your two fence panels to make a four-walled pen. Keep shrinking the space in which the sheep are caught by moving panels inward.

Sheep horns are easy to grab, but itâ€™s not good practice: You can pull the outer covering off of a horn, causing bleeding to occur, or break the horn at its base. If you must grab a horn, donâ€™t pull hard or hold on to it for any longer than necessary. And be sure to wear gloves, as horns can be sharp.

As soon as possible, cup one hand beneath the sheepâ€™s jaw. Donâ€™t squeeze; just apply gentle pressure. Sheep want to get away from you, but they donâ€™t want to walk forward into your hand. Instead, they will try to back away. To mitigate this back peddling, use your other hand to press on the sheepâ€™s shoulder or back.

You can also use your knee and a stable fence or wall for additional bracing. With both hands on the sheep as described above, use one knee to press the sheep against a wall or fence, which holds the sheep between your knee and the wall. This helps prevent the sheepâ€™s escape when it attempts to back up.

Little Bo Peep though it may be, I love my sheep crook to lead a sheep toward me. Crooks are an inexpensive, portable and effective tool for catching sheep. Hook a crook around one of the sheepâ€™s rear legs, walk toward the sheep, and remove the crook after youâ€™ve placed your hand beneath the sheepâ€™s chin.

If your sheep is short enough, you may be able to straddle it after youâ€™ve caught it by the chin, and gently press it between your knees to hold it. Sometimes, this catch is sufficient to administer a quick injection or oral drench or to check its eyes or mouth for problems.

Halter breaking sheep is worth the minimal effort required and is especially helpful if you work with sheep on your own. Later, youâ€™ll be able to walk the sheep on a halter, which is easier on you, and tie the halter to a fence to hold the sheep in standing position for as long as needed.

Place the halter on the sheep. Then either stand near the sheep, holding the halter, or tie the halter leash (without too much loose length) to a fence for about 10 to 15 minutes to start. Early on, the sheep needs to get the feel of the halter and learn not to pull. Sheep should get a reward (like oat crunchies) when the halter is put on, and when it stands still and doesnâ€™t fight.

Never leave a sheep alone while halter breaking, because it can get caught up in it and choke to death. Be sure to follow instructions and place the halter in the correct way. Do not put the adjustable part around the sheepâ€™s head, as it can become too tight and choke the sheep. There are good detailed instructions here.

Tipping and Flipping Without Force

Tippling and flipping sheep over for hoof-trimming, administering medicine, etc.â€”without hurting it or yourself in theâ€”is a matter of timing and shifting the sheep off balance, not brute force. It takes practice.

Begin in the position noted earlier: sheep chin in one hand, knee against one sheep hip, and free hand on the sheepâ€™s opposite hip. Turn the sheepâ€™s nose toward its rear end, which makes most sheep sit down. Timing is everything: As the sheep begins to sit down, push your knee into its hip to help it lose balance while guiding the sheep over and toward the ground. Do not pull the sheepâ€™s wool. This bruises them beneath the skin. Here is an excellent video on sheep handling from Robert Britton and the University of California Davis.

Sheep hate to have their legs grabbed. Itâ€™s natural to want the grab them (theyâ€™re so handy), but the less you do so, the less the sheep will fight and the happier youâ€™ll all be.

Plan ahead: If youâ€™re going to tip and flip sheep, keep them from food and water for at least 10 to 12 hours (overnight). Full sheep mean more weight to handle, but more distressingly, the weight of a sheepâ€™s full ruminant system presses against the its diaphragm, making the sheep feel it cannot breathe. Full sheep wheeze, gasp, andâ€”understandablyâ€”fight to stand up for air. Keeping a sheep off of food and water overnight sounds inhumane until youâ€™ve seen and heard a full sheep struggle to breathe.

If your sheep are more pets than livestock, you might have an easier time gathering them, but in my experience, pet sheep are often overfed and thus overweight, which in itself makes handling more difficult. And some pet sheep donâ€™t respond well to being treated like livestock, with a rather indignant attitude that makes for challenging handling.