How To Spot Foulbrood In Your Hive

This deadly bee disease needs to be carefully managed if found in your hive. 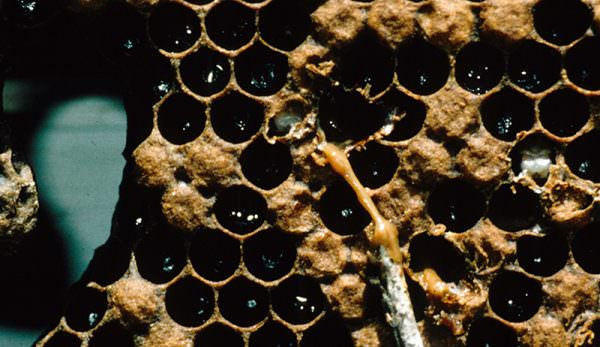 Of all the diseases your bees can get, foulbrood is probably the worst. While colony collapse disorder is devastating and still (mostly) mysterious, foulbrood is a known quantity: Itâ€™s a highly contagious bacterial disease that claims the wax, honey, and woodenware along with the colony. Foulbrood spores are so persistent they can sit dormant in old woodenware and equipment for over 40 years.

So thereâ€™s good news and thereâ€™s bad news: The bad news is that there are two types of foulbrood: American foulbrood (AFB) and European foulbrood (EFB). The good news is that the European is not nearly as lethal as the American and can be managed with either conventional treatments (think antibiotic medications for your hives) or beaten out with a good nectar flow by strong colonies. There are slight differences between the two, so weâ€™ll start with the worst.

AFB is caused by a nasty, highly contagious bacteria that exclusively affects the young larvae. At around 3 days old, the larvae unknowingly ingest the bacteria, which was introduced from old equipment that contained the spores or brought back to the hive from foragers who may have visited or robbed other colonies that died of AFB. The spores germinate in the guts of the young larvae, and it eventually kills them as young pupae. As the disease makes its way through the hive, the brood â€śmeltâ€ť in their cells, turning brown and sticking to the cell walls, leaving a foul odor in its wake. This is one of several telltale signs you have AFB in your hive.

Thankfully, EFB is not nearly as bad as AFB, and in many cases, itâ€™s survivable. The big difference between the two foulbroods is that the European strain doesnâ€™t have as persistent of pores as the American version. Both foulbroods can be managed with antibiotics; however, as a natural beekeeper, I prefer to manage strong hives with survivor stock genetics and avoid most medications, especially antibiotics, when I can.

Hereâ€™s how to spot foulbrood and manage the disease in your hive when you do.

Do always buy new equipment. Always! No matter how good of a deal you may get on used equipment, pass on it! Even if you know where it came from and trust the source, still get brand new equipment. Spores can lay dormant after forming in the decaying remains, sometimes trapped between layers in the brood cells.

Do trust your nose. The unpleasant odor from a hive afflicted with AFB will linger, and this is a telltale sign.

Do report any cases of suspected AFB or EFB to your state inspector and have them take a look at your hives for confirmation.

Do replace your queen if you have EFB. Youâ€™ll want to break the brood cycle of a hive that has European foulbrood; one way to do this is to replace the queen, and remove frames of afflicted brood. If you choose, now would be the time to treat the colony with approved foulbrood medication.

Donâ€™t keep the equipment from hives with confirmed or suspected cases of foulbrood. Best practice is to burn all of the equipment associated with the dead or afflicted hives. Your state inspector or local bee club or extension office should give you rules to follow regarding how to go about burning the equipment. But donâ€™t burn until you get the all-clear from your inspector. You can check out the Apiary Inspectors of America website to find an inspector to make a field diagnosis in your area.

Do replace your brood frames every four to five years. Old brood frame wax tends to turn from glistening white to dark brown, and almost black, over time. This is natural, as many hundreds of bee generations are raised over and over again in the same cells. The trouble is that those cells accumulate toxins and pesticides and run the risk of harboring foulbrood spores carried in from other places.