How to Stamp Out Mugwort in Your Garden

Mugwort (Artemisia vulgaris) is an introduced weed that’s very aggressive and can quickly overtake garden beds, as it has at my house. 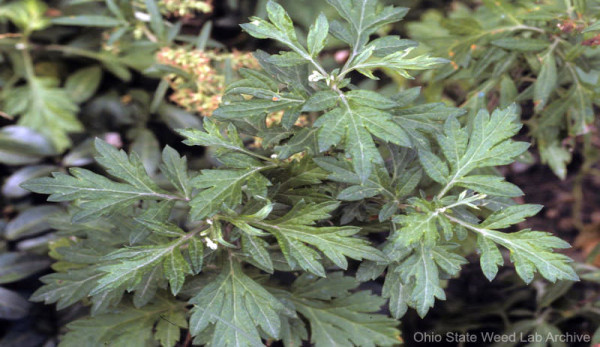 This is the year I vow to eradicate the mugwort from my garden. I’m putting it in writing so that I’m held accountable for getting rid of the stuff! Mugwort (Artemisia vulgaris) is an introduced weed that’s very aggressive and can quickly overtake garden beds, as it has at my house. At first, I mistook the foliage for that of chrysanthemum because the young shoots look very similar, but as the season progressed, it was quickly evident that I was mistaken. By that point, it was too late. That was four years ago, and needless to say, I’m still dealing with the stuff.

Mugwort is a perennial with serrated leaves that smell similar to sage and are green on top and silvery underneath. The flowers are greenish yellow and fairly non-descript. They emerge from upright branches in late summer and the pollen produced by the flowers can aggravate allergies. Although I certainly never allow it to flower in my garden, at full bloom, mugwort can reach from 2 to 6 feet tall.

Because it spreads by underground stems known as rhizomes, mugwort is challenging to remove. I’ve left small pieces of rhizomes behind in my attempts to dig it up or hoe it out over the years. Each of these pieces eventually re-sprouts and causes the plant to spread. In hindsight, I never should have attempted to dig or hoe those areas.

Not that I would ever use them on our organic micro-farm, but mugwort is also resistant to many common herbicides and because it’s growing near my shrubs and perennials, I would never use it there anyway due to the risk of harming desirable plants. Instead I plan to smother it.

Soon after it emerges this spring, I’ll cut down all the mugwort as close to the ground as possible. Then I’ll rake up all the cut stems and either burn them or throw them into the garbage. (Any stems left behind could root!) Next, I’ll cover the entire area with unwaxed, corrugated cardboard, being sure to overlap all edges and go as close to the base of the desirable plants as possible. I’ll wet the cardboard with a hose and then spread 4 to 6 inches of shredded hardwood mulch over it. The trick from there on out will be to not disturb the cardboard. Each spring, I’ll add a new layer of cardboard and mulch to the top of the bed, again, without disturbing the old layer. I hope this technique will smother the mugwort and send it packing!

Beat (or eat) garden weeds with these tips: