How To Start A Lavender Farm

This smell-good, feel-good herb is a beautiful crop that's sought after by florists, culinary pros, cosmetic companies and herbal-medicinal practitioners, so it can be a profitable crop for your farm. 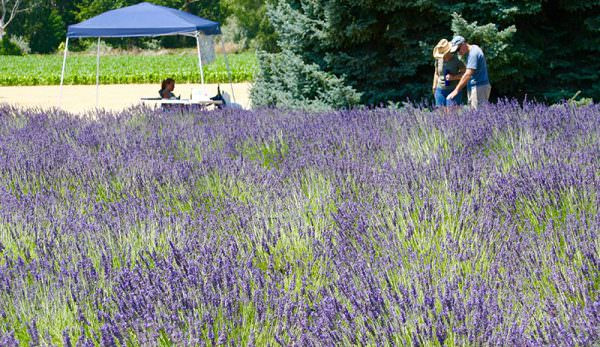 If you’ve ever been captivated by the scent and sight of a field of lavender in full bloom in mid-summer and thought, “I want to start a lavender farm,â€ť you arenâ€™t alone. In the same family as mint, this herb is not as easy to grow as its cousin. Lavender is particular about its growing requirements and has specific harvesting and preservation needs, making growing lavender commercially a focusedâ€”yet rewardingâ€”endeavor.

As you get into lavender farming, you might be surprised at the number of varieties of lavender. There are more than 20 species, each with multiple varieties. Most have the signature purple buds, but thereâ€™s also pink lavender, red lavender and white lavender, adding diversity to a small-scale lavender farmers’ options. Healthy lavender plants of all varieties can produce for 10 to 20 years.

Here are some varieties you may want to consider as you begin farming lavender:

As a Mediterranean herb, lavender likes hot, dry, sunny climes. In the U.S., many successful lavender farms are located along large bodies of water, such as lakes, that have their own warm microclimates.

Lavender is difficult to grow from seed, requiring five weeks of cold stratification before planting and, according to North Carolina State University, six months before the seedling grows to transplant size.

Purchasing lavender seedlings or taking cuttings from existing plants is an easier way to grow lavender. Colorado State University Extension suggests taking cuttings from stems with no flower buds on them just after the lavender plant has bloomed. Remove leaves from the bottom half, and put the lavender cutting into well-draining sterile potting soil or vermiculite. Keep the cuttings watered, and they should root in about three weeks. Transplant these rooted lavender cuttings into 2- to 4-inch pots. Once they have developed strong roots, plant the lavender seedlings in the garden. The University of Vermont also proposes dividing lavender root clumps in the fall.

Lavender likes room to grow, so depending on the size of the lavender variety, space them 2 to 3 feet apart within the row with 3 to 6 feet between the rows. Put lavender plants in full sun.

One thing every lavender grower will agree on is that lavender doesnâ€™t like wet feet. This statement has more to do with the soil type than the amount of water it’s given. Loose, well-draining, alkaline soil that’s not too rich is key to lavender-farm success.

Typical organic mulches are not good for lavender because of the plant’s susceptibility to mold and fungus. Black landscape fabric is a smart weed barrier for growing lavender plants. Mulching lavender with white sand or white stones may increase the plant’s production of oils and flowers while keeping down weeds and reducing fungus infections.

Having been developed along the Mediterranean Sea, lavender is not accustomed to cold weather and snow. If you have difficult winters, protect your lavender plants with heavy mulch, fabric row covers and wind blocks.

Use scissors to harvest lavender by the stemâ€”just under the first set of leavesâ€”in the morning, when the oils are the most concentrated. Lavender is best harvested when approximately half of the flower buds have opened.

There are several ways you may choose to package or preserver your lavender if youâ€™re planning to sell it at the farmers market or via wholesale. Perhaps the easiest method is dried lavender. Lavender dries well in bundles of 50 to 100 stems secured with rubber bands. Hang the lavender bundles in a cool, dark place with good air circulation for seven to 14 days.

Lavender Oil: To Make Or Not?

Lavender is said to have been used as a perfume by ancient Greeks and Romans and as a disinfectant and insect repellent since the Middle Ages. Even today, the majority of lavender is produced for its essential oils and fragrance production, says the North Carolina State University Cooperative Extension.

There is no easy answer to how to make lavender oil. According the Department of Agriculture, Food and Rural Development in Alberta, Canada, there are several means of distilling lavender essential oils:

Hydrosols are easier to produce for home-scale lavender farmers and require a less expensive equipment investment. Ben Alkire, a consultant in the essential-oils industry, suggests not trying to turn lavender essential-oil production into a full-time income, rather purchasing essential oils to turn into value-added products to sell at your lavender farm and through other direct-marketing outlets.

How To Make Money Growing Lavender

Turning your lavender farm into an agritourism destination is one way to profit from growing this herbâ€”people love to visit beautiful farms! However, there are multiple other money-making methods you can incorporate into your lavender-farm business plan.

You might find a market for fresh or dried lavender among local chefs, bakeries and high-end bartenders; florists; and soap, lotion and candle makers. You can also peddle your lavender wares for sale directly from your farm and through farmers’ markets and on handmade-goods websites, such as Etsy.com.

Growing lavender for profit is a challenging venture with a beautiful resultâ€”a field full of lavender. Starting a lavender farm opens many options for small-scale farmers, from lavender agritourism to value-added lavender products. Start growing today and see where your imagination takes you.

About the Author: Freelance writer Lisa Munniksma first became captivated by lavender farming while visiting a lavender farm in Idaho. Read her weekly ag-news and -opinion blog “The News Hog.â€ťÂ

One reply on “How To Start A Lavender Farm”

You can certainly see your skills in the work you write. The world hopes for even more passionate writers like you who arenâ€™t afraid to say how they believe. Always follow your heart.