How To Start Raising Ducks On Your Farm

Ducks make a valuable addition to homesteads, both with existing chicken flocks and without. Here's what you need to know to get started with ducks. 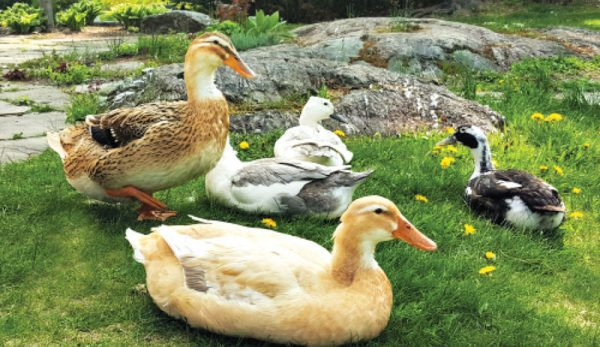 Are you thinking about adding ducks to your existing chicken flock? Maybe you donâ€™t have any chickens but are considering raising ducks on your farm or homestead or in your backyard?

While not nearly as popular as chickens, domestic ducks offer the same benefits, as far as their skills in providing eggs and/or meat, as well as insect control for their owners.

Ducks can live peaceably with chickens, but they do require a few extras for optimal health, including a deep water source, which can be a small pond, kiddie pool or just a tub thatâ€™s several inches deep. They also need a niacin supplement such as what is found in brewerâ€™s yeast for strong legs and bone health.

Other than that, I actually find ducks easier to raise and feel that they require far less maintenance. Their housing can also be simpler than a standard chicken coop, but ducks can certainly live happily in a coop.

Meat or Eggs or Both?

Like chickens, ducks can be raised for their eggs or their meat or for both. In general, my ducks are good layers year round, regularly out-laying our chickens. Ducks start laying when they are about 5 months old and will usually lay well for 5 to 6 years.

Breeds such as Khaki Campbells and Welsh Harlequin are particularly good layers. The heavier breeds, including Pekin, Rouen, Buff and Saxony, make excellent dual-purpose breeds, meaning they are good layers but also excellent provide good meat. One common practice on homesteads that hatch their own ducks is to keep the female ducks as layers and use the males for meat.

Ducks are flock animals and enjoy company. Even more than chickens, they tend to bond very closely with each other. Our ducks are always together, traveling as one cohesive group, whereas during free-range time, our chickens tend to scatter or hang out in groups of two or three.

A good starter ducks flock size would be two to five ducks, although I personally wouldnâ€™t recommend a flock size smaller than three at a minimum. If you only have two ducks and something happens to one, you will be left with one very lonely duck.

Although multiple male ducks (or drakes) tend to get along with each other better than roosters do, a good flock would be a mating pair, one drake and two ducks, or any number of females. An all-male flock works well, too, if you arenâ€™t interested in eggs but instead want to keep ducks for meat or insect control.

Domestic ducks canâ€™t fly. They like to run (waddle) as fast as they can, flapping their wings madly, and can manage to get off the ground for a bit. However, they wonâ€™t fly away on you.

Ducks love to roam free, looking for worms and bugs and eating weeds and grass. In fact, they make great garden helpers because they love gobbling slugs and grubs. Small, active breeds such as the Ancona, Cayuga, Runner and Magpie are particularly good foragers.

But because they are awkward and unwieldy on the ground, domestic ducks are extremely vulnerable to predators such as fox, raccoon, coyotes, dogs and eagles. They should be kept in a secure pen by day if you donâ€™t have a dedicated guard animal protecting them, and then locked in a predator-proof house at night.

Ducks are extremely cold-hardy but will appreciate a nice thick layer of straw on the floor to sleep on year round, and plenty of ventilation because they emit lots of moisture when they sleep.

Your duck shelter will need to allow a minimum of 4 square feet of floor space per duck so each has enough space to turn around, spread their wings and sleep comfortably. Unlike a chicken coop, a duck house doesnâ€™t need to have roosting bars or nesting boxes, so itâ€™s easy to convert a small dog house, play house or garden shed into a shelter for your ducks.

Ducks lay their eggs predawn. They donâ€™t need nesting boxes but instead will make their own nests in the corner of their house in the straw. They like to hide their eggs under a blanket of straw after they lay them, so you may have to search a bit! Most ducks lay white or slightly tinted eggs, but some ducks do lay pale blue eggs.

Interestingly, within the same breed, some ducks might lay white eggs, while other ducks lay blue eggs. And a duck that hatches from a blue egg might very well grow up to lay white eggs. Depending on the breed, you might end up with more blue layers, with the greatest probability occurring with Runner and Mallard breeds.

Domestic ducks donâ€™t tend towards broodiness as a general rule, but Mallard, Rouen or Dutch Hookbill would be your best bet if you want to try hatching some ducklings yourself. Their eggs have a 28-day incubation period compared to the 21-day period chicken eggs require.

Duck eggs are about 30 percent larger than chicken eggs on average and contain more cholesterol and fat but also more nutrients. They are great for baking, because the higher fat content makes baked goods rise higher and taste richer.

You can prepare them the same as chicken eggsâ€”they are excellent when fried, scrambled or turned into omelets, custards or other favorite egg dishes.

Ducks themselves are extremely clean animals but love to make a huge mess where ever they can find a water source.

I learned my lesson early on about keeping feed and water inside the duck house. You just end up with a soggy, wet mess inside the house which attracts flies and rodents. Because ducks are so cold-hardy, itâ€™s not a problem to set up ducksâ€™ feed and water outside each day year round no matter where you live.

One duck will eat about half a cup of feed a day. They can eat regular chicken layer feed if you canâ€™t find waterfowl feed, but, as mentioned previously, adding a two percent ratio of brewers yeast to the feed will provide the additional Vitamin B3 (niacin) that they need to grow and maintain strong legs and bones.

Ducklings can be fed unmedicated chick starter for the first two weeks, then grower feed until they are of laying age. But from hatch to laying age and beyond, they do need the brewerâ€™s yeast supplement.

Ducks donâ€™t need a pond or pool to swim in. Although they do enjoy splashing about from time to time, domestic ducks are dabbling ducks, not diving ducks, so they are just as happy rummaging around in the dirt and mud looking for insect larvae, weed seeds and other tasty treats.

That said, they do need a water source deep enough to dunk their head intoâ€”a water tub several inches deep will suffice. This keeps their eyes and nostrils clean and clear.

Raising ducks is a rewarding and wonderful family adventure. Ducks are good layers, superb at insect control and will provide hours of entertainment as you watch them waddling around. Whether or not you already are raising chickens, I recommend adding a few ducks to your property.