How To Store Hay To Make It Last

Make your hay harvest last with these tips for efficient hay storage. 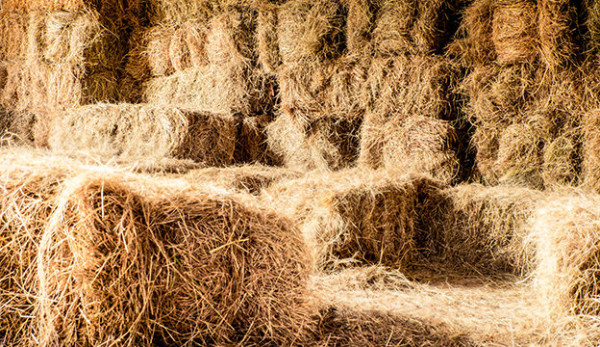 Sky-high machinery and fuel costs and the lack of affordable haying-crew labor is driving up the cost of putting up hay. At the same time, hay shortages have become a way of life. When you harvest quality hay, it’s dollar-wise to preserve it so it lasts.

Hay is a generic term for grass or legume plants that have been cut, dried and stored for use as animal feed, particularly for grazing species, such as cattle, equines, llamas, alpacas,¬†goats and sheep. Because feed changes upset some animals’ digestive systems, it‚Äôs advisable to put up enough of the same type of hay to last a season. To preserve its nutritional value, put up no more than you‚Äôll feed within a year of harvest. Keep these things in mind when you plan how much you‚Äôre going to grow and package.

Hay can be bundled in three basic ways:

Protect valuable hay from the elements by storing it under cover in a building that doesn’t leak and has good ventilation. Choose a building on an elevated, well-drained site. Hay is highly flammable, so you don‚Äôt want it overhead if your main barn catches fire. It‚Äôs also a potential source of fire, putting your barn in jeopardy should it ignite. If you can‚Äôt store hay in a separate building, keep only small amounts in the barn at one time. Keep the hay away from trucks, machinery, or any type of heat source and fire accelerants, like gasoline, kerosene, oil and aerosol cans.

Organization is key to make sure hay doesn‚Äôt go to waste. Store hay where it‚Äôs accessible. Don‚Äôt stack hay higher than you can safely move it‚ÄĒthis is especially important when stacking large round bales. And stack new hay behind older bales so you can feed the older hay first.

Hay stacked on bare ground or concrete wicks moisture up through the bottom tiers, ruining the hay. Materials you can use to help insulate hay from wet soil or concrete and provide some ventilation include telephone poles, wooden pallets and tires.

If storing small square bales, stack the bottom layer on their sides with the strings facing sideways instead of up. The uneven surface allows better air circulation. Stack the second layer with the strings facing up, perpendicular to the first layer. Stack the third layer perpendicular to the second layer and so on to lock the stack in place and make it more stable. If you decide to stack large bales, arrange them the same way, but only if you have a tractor capable of lifting the bales.

If the hay storage area is open on one or more sides, or if it’s a shed with only a roof, cover the fully-cured hay with a tarp to keep out weather and light. Sunlight bleaches hay, causing it to lose nutritional value, especially protein and vitamin A.

If fully outdoors, cover stacks of square bales (large or small) with tarps, securing the tarps with strong tie-downs. A sloped top, created by pyramiding the final layers, sheds snow and rain better than a flat one. Use strong, sturdy tarps free of holes or rips. Check tarps on a regular basis to make sure they‚Äôre securely tied down.

Round bales should also be stored on the twine or wrap side. They store well when flat ends are butted end-to-end in long rows. Orient rows north and south so prevailing winds won‚Äôt create snow drifts and so both sides of the row receive sunlight for drying. Don‚Äôt arrange them in a row with the twine sides touching, creating a water-absorbing valley between bales. If bales must be stored side by side, leave at least 2 feet between bales. Space adjacent rows at least 3 feet apart so water from one row doesn’t run off onto another. The round bales shed water better so tarps aren‚Äôt necessary.

Keep in mind, a certain amount of every large bale stored outside invariably spoils, depending on whether it’s twine or net wrapped, how much rain and snow falls during the storage period, what kind of soil it’s stored upon and the amount of space between the bales.