How To Treat Wet Feather In Ducks

Wet feather affects duck feathers’ waterproofing abilities and can cause other problems for your ducks. 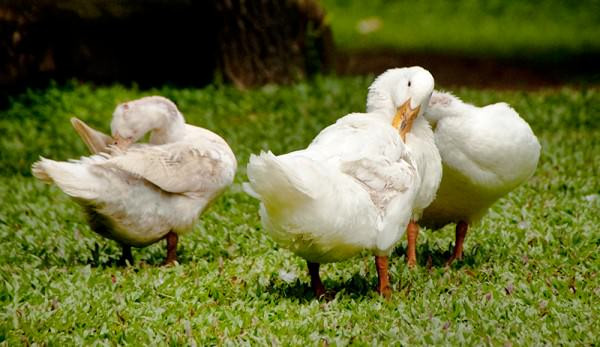 One of my ducks is currently suffering from a pretty bad case of wet feather; she’s started to avoid the water completely. What can I do?

Usually, rainwater will naturally run off a duck’s back due to its waterproof feathers, but with a condition called wet feather, this waterproofing doesn’t quite work: The rain soaks in, and the duck’s down can become waterlogged, causing the duck to become chilled and start to avoid the water, making matters worse. This is due to problems with the plumage itself.

To understand wet feather, you first have to understand a little bit of feather anatomy and duck behavior. Running up the center of the feather is the stiff backbone called the shaft, and on either side of the shaft, parallel branches called barbs make up the feather’s web. These barbs have tiny crisscrossing branches called barbules that are held together with minute hocked filaments known as barbicels. For the feathers to provide the insulation ducks require, the barbs, barbules and barbicels must be properly aligned. If not, the duck rearranges them through a process known as preening. While preening, ducks remove dust, dirt and parasites from their feathers and realign each feather to the optimum position relative to each other and the shape of the duck’s body.

The preen gland, or uropygial gland, is an oil-producing gland located near the base of the duck’s tail that is an essential part of preening. Oil produced by the gland is released by a nipple-like pore. During preening, a duck rubs its bill and head over the preen gland and then rubs the accumulated oil over the feathers of the body and wings. The oil helps waterproof feathers and keeps them flexible.

Back to wet feather: This condition results when the feathers have lost their waterproofing. There are several reasons this can develop, including external parasites (which can result in excessive preening) or even issues with the preen gland itself: It may be infected and, subsequently, not producing enough oil. If the oil gland is infected, you will potentially see yellow skin around the tail area or, on closer examination, the oil gland will be swollen. Affected ducks may also have excessive shaking of the tail.

Reduced preen oil production can also result from malnutrition, specifically deficiencies of vitamins B and E, both of which are required for healthy production of oil. (The addition of cereal grains, especially wheat, can help meet ducks’ vitamin B and E requirements.) Wet feather can also result when birds are kept without adequate water and then relocated to a site with more than sufficient water. It’s important to identify the cause of the problem and rectify the situation as soon as possible.

Ducks lose their feathers once a year during molting season, and this annual
molt will typically cure the duck of wet feather. In the meantime, you can try the following steps to help reverse the effects, but be forewarned: It requires time, patience and hard work.

This may alleviate the problem, but in some cases, only the annual molt will help.

In severe cases of wet feather, the duck may need to be culled. If the initial problem is not corrected, be it excessive external parasites or an infected preen gland, the condition may return, so make sure to treat for parasites, check the condition of the preen gland—inflammation, redness, heat and tactile changes are signs of an issue—and treat if necessary and verify the nutrient intake of the ducks.

Jacquie Jacob, PhD, is a Poultry Extension Project Manager at the University of Kentucky who specializes in small and backyard flocks and works with youth poultry programs. She has also worked at extension offices in Florida, Minnesota, Africa and Haiti.