How To Try To Revive A Chick With Health Concerns

Sometimes, a newborn chick will experience health struggles and need some help from its keeper. Here are a few ways to revive struggling chicks. 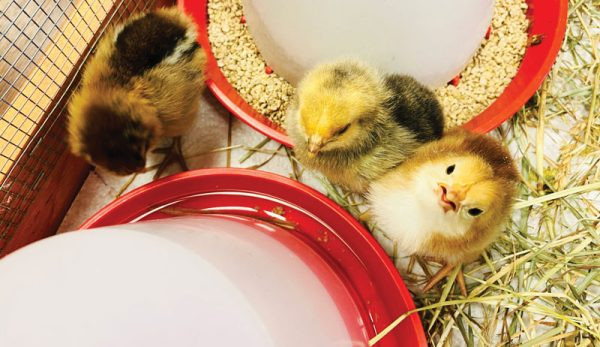 Chickens are relatively inexpensive, easy to care for and small compared to other livestock. This makes them perfect for backyard and urban chicken-keepers. Whether you get your birds through the mail or hatch them on site, it‚Äôs an exciting day when your new chicks arrive.¬Ý

Despite their small size and potential fragility, chicks tend to be hardy when provided with the right environment. However, sometimes a chick arrives weak and/or experiencing health concerns. Though this doesn‚Äôt mean you‚Äôre going to lose it, some loss is to be expected.

Use the common tips on the following pages to help revive those weak chicks.

Signs of a Potential Problem

Dana Zook is the northwest area livestock specialist for the Oklahoma Cooperative Extension Service, covering 14 counties. About six years ago, she began helping a lot of backyard chicken people. All her expertise, however, has been in the field and not through formal training.

She advises that a chick with good health should be bright-eyed, dry and fluffy, moving around and interested in their surroundings.

It‚Äôs not good if you have chicks that are depressed. ‚ÄúIt‚Äôs kind of a humanizing word, but we use it a lot if you have sick animals,‚Äù Zook says.

Look at the vent to see if it‚Äôs dirty or if it or other parts of the chick‚Äôs body has a lot of manure stuck to it. Chicks should be relatively clean, so if there‚Äôs manure on them, it could be a sign of a problem with the chick or its environment.

Another area Zook advises you should look at carefully is the navel. Any issues with the navel could signal a serious problem.

If you purchase your chicks from someone else, you generally won‚Äôt know how the eggs were handled, what the hatching environment was like or how the chicks were cared for before being sent to you. This can make it difficult to know what might have caused a chick to arrive weakened.

The very first thing Zook tells people, whether they want to get eggs or chicks, is to get them from a reputable source. ‚ÄúSick chicks early on can be indicative of a dirty environment either in the incubation stage, hatching stage or mailing stage,‚Äù she says.

‚ÄúGetting chicks or eggs from a reputable person that‚Äôs NPIP [National Poultry Improvement Plan]-certified is important for keeping some diseases under control. It also keeps everyone on the same page as far as what‚Äôs going on in the industry from a health standpoint.‚Äù

When you‚Äôre hatching your own eggs, the most important thing to provide is a clean environment before, during and after the hatching process. Weakness in a chick can stem from being hatched into a dirty environment that harbored bacteria.

Read more: Curious about hatching chicks with an incubator? Here are some tips for starting out.

A primary requirement for newly hatched chicks is warmth. Without it, they might become weak and eventually die. Temperature regulation can be a real problem.

Baby chicks can‚Äôt regulate their own temperature. ‚ÄúA lot of people are surprised by that,‚Äù Zook says. ‚ÄúIt‚Äôs important to educate yourself on the proper brooder temperature.

“If you have eggs in an incubator and they‚Äôre just about ready to hatch, understand the importance of temperature and humidity during this time. Have a thermometer so you can monitor temperature. It needs to be between 90 to 95 degrees for about a week after chicks hatch because they just have no way to keep themselves warm.‚Äù

Janet Garman of Timber Creek Farm ( @timbercreekfarmer on Instagram) in Maryland has raised chickens of various breeds, including some rare breeds, for over 12 years. She‚Äôs written two books on chicken-keeping geared toward the first-time chicken owner, including Chickens From Scratch and 50 Do It Yourself Projects for Keeping Chickens.

She agrees that the primary health need of a chick after hatching is warmth.

‚ÄúIf hatched by a broody [hen], the chick will nestle under the momma while the other eggs hatch,‚Äù she says. ‚ÄúWhen hatched in an incubator, the best practice is to leave the chick in the incubator until most eggs have hatched. This prevents humidity levels from dropping and causing shrink-wrapped chicks.‚Äù

Before removing chicks from the incubator, begin to warm the brooder. Garman prefers the warming plates that look like tables for chicks to huddle under. ‚ÄúThe radiant heat is gentle and there‚Äôs little chance of them overheating because they can walk out of the warm area,‚Äù she says.¬Ý

If your chick becomes chilled due to lack of heat in the brooder, warm it immediately. Some chicken-keepers will use their body heat and tuck the chick into their shirt to improve the bird’s health.

‚ÄúThe important thing is to gradually raise the body temperature of the chick before attempting to give food or water,‚Äù Garman says. ‚ÄúA warm towel fresh from the dryer can help warm the chick, too. Keep a close eye on the chick as this is a critical time.‚Äù

If a chick is warm but won‚Äôt eat, its health will decline as it grows weak from lack of food. Do your best to help it find the food and water. New chicks won‚Äôt know it‚Äôs there or even what it is.

Zook suggests feeding and watering them in something easy for them to use to start with, such as lids, trays and similar items. These work well for the first few days. Then you should switch them with proper equipment that‚Äôs easily cleaned and more functional.

When a chick knows where the food is but still refuses to eat, chicks have a reflex response to their beak being tapped lightly with a syringe.

‚ÄúOnly offer food if the chick‚Äôs body temperature is warm,‚Äù Garman says. ‚ÄúYou can then try a syringe of mushy soft food to see if it will eat. But don‚Äôt push food into the chick‚Äôs throat as it may not be able to swallow.‚Äù

Besides encouraging the weak chick to eat, you can also give it things to provide a temporary boost of energy. A short-term boost could be what it needs to bounce back and start eating.

Chicken keepers have found various items to provide this boost that worked for them in the past. Garman has had luck with some unusual substances. But she emphasizes that these weren‚Äôt based on veterinary advice and were purely anecdotal based on her own unique experience.

Short-term mixtures of protein and tasty carbohydrates such as molasses can deliver energy. ‚ÄúA few drops of molasses in a mixture of soft cat food or soaked chick feed might interest the little one,‚Äù Garman says.

‚ÄúFermented feed also provides higher nutrient availability. The caution with using canned cat food is that it should only be a once or twice remedy. It‚Äôs not recommended to feed cat food to chickens on a regular basis, as the protein levels in cat food are very high.‚Äù¬Ý

Use of any unconventional treatment can vary. It comes with risks, but when you have a dying chick in your hands, sometimes a last-ditch effort can bring it around.

‚ÄúI don‚Äôt give this as advice or as a cure,‚Äù Garman says. ‚ÄúThe reason I say it is because when we have an ailing chick, we feel like we need to do something. The first thing has to be to warm the chick. If it comes around enough, giving it a few bites of a high-protein/high-carbohydrate mixture might put it on the road to recovery.‚Äù

Prevention Is the Preference

There aren‚Äôt any guaranteed methods of reviving weak chicks. What works on one might not work on another. Taking appropriate steps to prevent problems that might lead to weakness is always preferred over trying to revive chicks once they‚Äôve become weak.¬Ý

Zook again emphasizes the importance of providing a clean environment when they‚Äôre hatched. It‚Äôs especially important after hatching because there‚Äôs going to be lots of manure. This can transmit diseases.

‚ÄúChicks eat lots of things,‚Äù she says. ‚ÄúThey‚Äôre always pecking at different things, and they‚Äôll take in some bacteria if you‚Äôre not keeping the environment clean. The water also must be cleaned out every day to keep manure out of it.‚Äù

A simple way to help keep the environment clean is to use a bedding source that‚Äôs really easy to change. Zook suggests using paper towels for the first three days. It‚Äôs something the chicks can safely stand on and it‚Äôs super easy to change out.

Puppy pads are also really good for the same reason. Newspapers aren‚Äôt ideal because chicks can slip on it and potentially cause leg issues.

One thing you can do to prevent them from getting too cold is having a brooder guard for the first couple of days.

‚ÄúIt‚Äôs very simple and keeps chicks closer to the heat source,‚Äù Zook says. ‚ÄúIt kind of trains them. You can buy a brooder guard. But you can also just make a cardboard cutout that makes a smaller area and keeps the chicks a little closer.‚Äù

Sometimes Nothing Can Be Done

Setting up your chicks for success isn‚Äôt always possible when receiving them through the mail. Baby birds usually withstand traveling by mail just fine. But they can become infected during the mailing process or the temperature could drop too low during transit due to extreme weather or shipping delays.

You might be able to revive birds that arrive in a weakened state. Sometimes, however, nothing can be done.

‚ÄúIt‚Äôs important to remember that chicks are rather fragile beings,‚Äù Garman says. ‚ÄúThey often thrive. But some aren‚Äôt strong enough to live. It‚Äôs a sad fact of chicken-keeping.

“Not to say that I don‚Äôt do what I can to help the weaker chicks get back on their feet. But some aren‚Äôt going to survive. If a chick won‚Äôt stay warm and swallow, forcing food and water will usually make things worse.

“The chick can easily aspirate and die from pneumonia.‚Äù

A Sad Fact of Farming

Like all livestock, sometimes chickens die. It‚Äôs a reality that chicken-keepers must prepare themselves for.

‚ÄúYou‚Äôre always going to have a percentage that just doesn‚Äôt do well,‚Äù Zook says. ‚ÄúYou can look for indicators, but sometimes there‚Äôs not anything that tells you what‚Äôs wrong. This may be especially true if a majority of your chicks are doing fine and there‚Äôs just one that‚Äôs not.

For the most part, our chickens enjoy good health and long lives, starting in their chick days. Our flocks thrive and survive under our care. But a newborn chick with health problems‚Äîwho isn‚Äôt standing, won‚Äôt eat and is weak‚Äîhas a poor prognosis for survival.

Keeping it warm and safe from the pecking of flock members is a sweet, caring thing to do. And it may be all you can do.¬Ý

‚ÄúI tend to be a realist and while I do mourn any loss of life,‚Äù Garman says. ‚ÄúI also realize that this is the way things are on a farm, and I try to keep it in perspective.‚Äù

This article originally appeared in the March/April 2022 issue of¬ÝChickens¬Ýmagazine.