Providing pigs with water can be a challenge, but careful equipment selection and best practices can helpâ€“especially when winter temperatures drop below freezing. 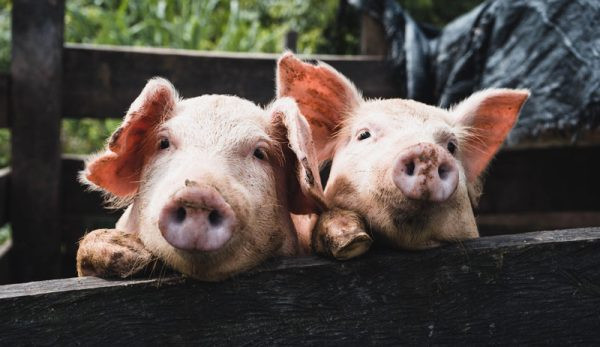 Keeping clean water available to your pigs can be a real challenge at times! These clever omnivores, combining strength with an inquisitive nature and a love of mud, can upset a water trough before you can turn around. But in high summer, even a few hours without water can seriously compromise a pig’s well-being; and even in winter, our animals need water to be constantly available.Â

Outsmarting our pigs is an ongoing project, so it’s a good thing there are lots of ways to water a pig!

How Much Water Does a Pig Need?

How much water pigs need is the first consideration.Â  Water consumption for sus scrofa can be highly variable, depending on weather, the size of the animal and what it is eating. (Pigs on dry feed drink more than pigs on a natural diet.)Â

While young pigs may consume only a few pints a day, a lactating sow (mama pig nursing babies) can require as much as 6 gallons!Â  So whatever method you use for delivering water to your pigs should take these requirements into consideration.

Read more: Check out these tips for preparing your pigs for winter.

First, of course, is the basic water trough.Â  The lowest-tech solution, this may be the obvious choice when you’re just starting out.Â

Troughs can work well, too, if we take the time to plan thoroughly. Â

A trough for pigs should be heavy enoughâ€”even when half-emptyâ€”that the animals can’t flip it.Â  And while the sides have to be low enough so that even the smallest pig can get a drink, you also want them to be high enough to prevent animals climbing (or being pushed!) over the side. Â

If you elect to water from a trough, putting one or two cinder blocks in the bottom of the tank can provide footing for any animal that might fall inâ€”at least long enough for you to help it out again.Â

An open trough also presents a challenge for animals kept on deep bedding. Tank sides need to be high enough to prevent litter from falling in and fouling the water. Â

Only slightly more complex than a trough are the cup waterer and pig nipple. These simple valves can be fitted to a garden hose and attached directly to the wall of a pig pen.Â Since there is no trough, there is no danger of drowned animals or fouled water.Â

And animal-activated stem valves mean that water is delivered on demand only. This keeps waste to a minimum.Â

Of course, a pig who wants a puddle in which to wallow canâ€”and may!â€”cause deliberate spillage to make a wet spot. But, generally speaking, these simple valves help keepÂ to a minimum .

Don’t have running water to the pig pen? Not a problem!Â  Pig nipples and cup waterers can be easily plumbed into the side of a large plastic barrel. This, when filled with water, will be too heavy for your porkers to flip. And you can stabilize it in one corner of the pen for further security.Â

Hooked up to a rain barrel outside the barn, your pig barrel will even fill automatically!Â Or, if your pigs are on pasture, an extra-large livestock tank can be similarly fitted with a pig-operated waterer. The tank’s broad base will prevent overturning.

Read more: Do you have a farm water backup plan?

Of course, water in the heat of summer is an hourly necessity, but winter water can be just as much of an issue! If you are keeping a pig during the cold months, you’ll have to find a way to keep his water from freezing.Â

First, there’s nothing to prevent you from simply breaking ice in your stock tank, if that’s where the pig gets water.Â  We do it ourselves and know others that do the same.Â

Dropping in an electric stock tank deicer may be all that you need to keep water warm enough that it will not freeze. But if you are using a metal pig nipple, this extension may be the first part of your system to ice up.Â

In only moderately cold weather, inserting a copper wire or six-penny nail into the back of the stem valve will sometimes conduct enough heat from the main tank to prevent the nipple freezing.Â  Make sure, though, that there is no possible way for the pigs to reach the heaterâ€”or the heater cord! Pigs will chew on anything, so take precautions so that you don’t get a shocked pig or an electrical fire.

Running Water Is Slower to Freeze

Other solutions may be even simpler.Â  Running water is slow to freeze, which is why in near-freezing weather you may see an outdoor tap left open just a trickle. Why not direct this tiny flow into the pig tank?Â  Even mere drips of water falling in a tank will disturb the surface enough to prevent freezing if temperatures are not too low.Â

Or you could do something as simple as filling the tank daily with a bucket from the house. Â

Is there snow on the ground?Â  Pigs are smart!Â  Let them eat snow for their hydration needs, as long as clean snow is available in their pasture or paddock. Save yourself days or weeks of breaking ice or hauling water. Â

And there’s always butchering time to put an end to our pig-watering choresâ€”until we get another pig!