How & When To Give Your Sheep A Hoof Trim

It's important to keep an eye on your sheep's feet to avoid lameness. And when you're checking for foot rot, you may want to go ahead and do a quick hoof trim. 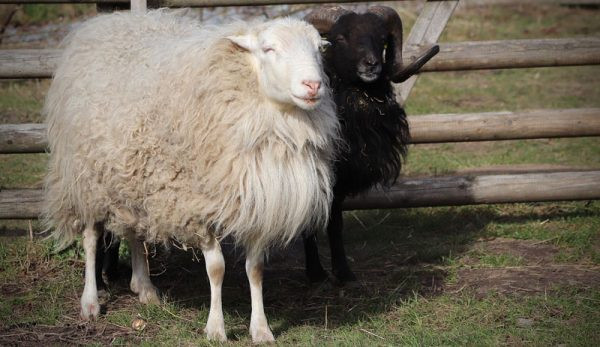 If you look at what keeps your sheep moving and healthy, you have to start with the hoof.

Some folksâ€”especially those out West with drier climates and more rocks to wear down hoovesâ€”wonâ€™t have to pay as much attention.

But I live in the Midwest, which has become more rainy in recent years and this year, muddy even well into December. Wet ground can cause all kinds of issues with your sheepâ€™s feet. And, if you keep them inside for any amount of time (as I do at night), those issues can compound.

I also discovered in doing some research about sheepâ€™s hooves that having good nutrition can actually cause some issues. If your sheep are well fed, their hooves will grow more quickly.

Keep an Eye on the Feet

As my flock fits the bill for potential hoof problems, I try to keep an eye on their gait. I try to notice any limping or unusual movement each morning when I let them out of the barn.

I did notice one of my (hopefully) pregnant ewes limping a couple of mornings ago. My dog Dash and I got her back in the barn and up against a wall so I could lift up her leg and see what was going on. When I lifted the hoof up, I saw a small stick stuck in between the two points of her hoof.

Ahha! After I pulled it out, I looked a bit more closely. I saw that her hooves were a little overgrown, which may have been how she got the stick stuck in there in the first place.

So I went to retrieve my hoof trimmers and some Hoof â€˜n Heal just in case I found any signs of foot rot.

Read more: Got goats? Check out these tips for trimming their hooves.

Foot rot is generally more prevalent when the temperatures are warmer. But I didnâ€™t want to assume my ewe wasnâ€™t suffering from this. Certainly having a stick caught in between the two digits of the cloven hoof could have resulted in an injury–which then might invite infection.

Quite often, the bacteria that causes foot rot is brought in by a new sheep and it passes around the flock. Moist conditions make it ideal to spread around.

When I picked up my eweâ€™s hoof once again, I dug around with the tip of hoof trimmers to remove any packed-in dirt or manure. It’s really best to get all of that out before a hoof trim so you can get a good idea of how overgrown the hoof is.

Her hoof looked clean and dry, even though the front of the hoofÂ  and the outside wall was fairly overgrown.

Read more: Learn more about the basic anatomy of your livestock’s hooves!

Time for a Hoof Trim

Working from the back of the hoof toward the toe, I trimmed off the outer wall that had grown faster than the inner part. The goal is to trim the bottom of the hoof as flat as possible.

Trimming hooves is not hard, but it does make me nervous. You donâ€™t want to cut too much hoof off and cause bleeding. I bring some iodine with me to put on the hoof if I do cut too close.

Hoof trimming shears come in all types and sizes. I find they donâ€™t stay super sharp for a long time. But since I donâ€™t have to trim all that often, I donâ€™t mind buying new ones when needed.

In general, unless one of the sheep is showing signs of lameness, we will save hoof trimming to be done at the same time as shearing, thus keeping the stress of handling to a minimum.You also donâ€™t want to stress your sheep with hoof trimming during late gestation or during hot weather.

When I finished with my trim of this ewe’s hoof, it looked nice and neat again. I then checked the other three hooves while I had her still, and did a bit more trimming on a few other hooves.

No matter what the cause, never ignore lameness in your sheep. If you can’t figure it out on your own, call a vet to come take a look.Â  Diseases of the hoof can signal other problems that youâ€™ll need to deal with to keep your entire flock healthy and running sound!