How (& Why) To Forage For Lion’s Mane Mushrooms

Versatile fungus with tons of flavor, lion's mane mushrooms are easy to spot and, without any dangerous lookalikes, a simple and safe entry into foraging for food. 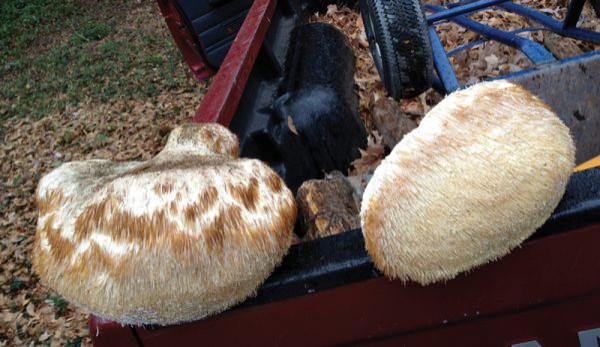 For most edible mushrooms, the only tool that youâ€™ll need will be a pocketknife to cut the stalk. For the round, white tufts of a lionâ€™s mane, however, youâ€™ll want to add a ladder or a pole pruner.

Because while money doesnâ€™t grow on trees, these gourmet mushrooms do. And sometimes youâ€™ll have to crane your neck to see them.

For one 33-pound lionâ€™s mane mushroom (the record is 100 pounds), I had to carry my 8-foot stepladder through the woods. I only kept 4 pounds of that mushroom and sold the rest to five downtown chefs.

Rarely, Iâ€™ve harvested them at chest-height or even ankle-height. And they sometimes grow on city trees.

Read more: Why start foraging? It provides a link to ancient ancestors, for starters.

One year, before speaking on foraging at a downtown organic farming conference, I strolled outside to psyche myself up. In the outdoor dining area of a restaurant, I found a 3-pound lionâ€™s mane just out of reach on an oak tree. Ignoring the raised eyebrows of wait staff and diners, I borrowed a chair to stand on so I could wrench that mushroom from its hollow.

I passed it around at my presentation just a few minutes later.

Another year, I harvested a 6-pounder. I really wished Iâ€™d had that tall ladder with me then, as I had to make do with a borrowed 4-foot stepladder stacked on two borrowed plastic tote boxes full of Christmas decorations. And even on top of that leaning tower,
I could only pop that lionâ€™s mane off the tree by spearing it with a pitchfork.

But once the succulent, white flesh had been hand-shredded and fried up as a blue crab meat substitute in a crab cake recipe served to my wife and friends, all the airborne acrobatics were well worth it.

In the North, if itâ€™s cool enough, lionâ€™s mane can be found in summer and fall. But in the South, itâ€™s most often found in winterâ€”a good reason to adopt my preferred name for it: Santaâ€™s beard.

Itâ€™s one of the best-tasting mushrooms. And one of the most medicinal.

These distinct mushrooms donâ€™t have any poisonous lookalikes. They are bright white and completely covered with tender, white spines as long as almonds and as dense as fur. Hence, they get a lot of common names: bearâ€™s head, goatâ€™s beard, deer tail and pom poms.

Older ones may have a tawny tinge that doesnâ€™t affect the flavor. The interior should be bright white, though. Any discoloration means itâ€™s too old.

If the weather has been dry, your lionâ€™s mane may also be very dry and tough. In that case, let it soak in some water for 5 to 20 minutes, checking it with a squeeze until it has rehydrated to a palatable texture before cooking as described later.

If itâ€™s been rainy, it may be so saturated that water will run down your arms when you harvest it. In that case, before cooking it, twist the mushroom like a sponge over a bowl to release the excess moisture until itâ€™s tender but not soggy.

An amazing amount of water will come out, yet the mushroom will return to its original shapeâ€”like a sponge.

Save the liquid for cooking rice or starting a soup. Shave off the spines with a sharp knife, and cook them in butter or bacon fat for a few minutes and serve as a miniature pasta appetizer. Then, hand-shred the bulk of the mushroom to prepare for cooking.

You can add it to soups, sauces and stews. Or you can use it as a substitute for crabmeat. (It looks very similar when hand-shredded.)

You can even season and sautĂ© it until browned as a stand-alone substitute for a meat dish.

After the leaning-tower-of-Christmas-decorations experience, I decided to carry my folding ladder in the bed of my pickup during lionâ€™s mane season. Iâ€™ve used it twice. But Iâ€™m thinking that maybe a simple pole pruner would be lighter and perhaps safer.