Huacaya (pronounced wah-KI-ya) are a type of alpaca with short, dense, crimpy fiber. 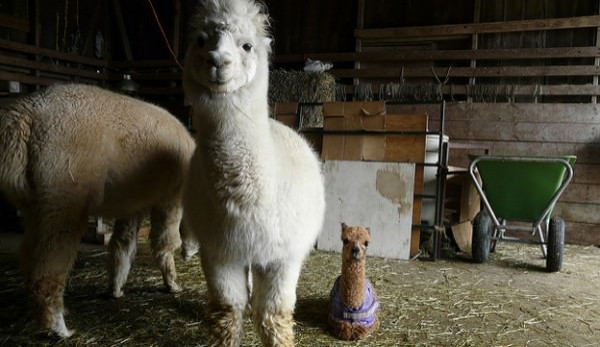 Use: Farmers normally raise Huacaya (pronounced wah-KI-ya) alpacas for their fiber, which is short, dense, crimpy and gives a woolly appearance. Like the Suri alpaca, the Huacaya alpaca is prized for its thick, soft fleece–it’s been known for centuries as “The Fiber of The Gods.” Alpaca fiber offers quality, versatility and rarity; in the fashion world it’s considered to be one of the most exclusive fibers, competing with wool, cashmere and mohair. Alpaca fiber can be used as sheer in the finest silks, to as thick and chunky as tweeds and wool. It dyes easily, makes the warmest batting, the softest felt, spins like a dream, and can be mixed with other fibers to combine textures and beauty. People also raise alpacas for companionship and to enjoy a rural lifestyle.

History: Alpacas are originally from South American where the Incas bred them for thousands of years. In the early to mid-1980s, several alpacas were imported to the United States from Bolivia, Chile and Peru. Alpacas are modified ruminants, part of the camelid family, which includes llamas and camels. While their smaller size and quizzical faces do in fact give them a high cuteness factor, whether or not they are huggable is debatable. At the end of the day, these are livestock. The occasional alpaca may enjoy a hug, but for the most part, they’re happy to mingle among their own.

Conformation: Huacaya, as well as Suri alpacas are a small and relatively easy livestock to maintain. They stand about 36 inches tall, weigh between 150-200 pounds. The alpacas need basic shelter and protection from heat and foul weather; being livestock, they require certain vaccinations and anti-parasitic medicines. They don’t have horns, hooves or claws, incisors, or upper teeth; they eat grass and chew cud. Alpacas don’t have hooves-they have two toes, with hard toenails on the top of their feet and a soft pad on the bottom of their feet, much like a dog’s foot. Therefore, you don’t experience compaction of the soil to same degree that you would with other types of livestock.

Special Considerations/Notes: Additionally, their toenails need to be trimmed every couple of months and the fleeces sheared off once a year.