I learned an interesting lesson this summer: Not all hummingbird feeders are created equal. 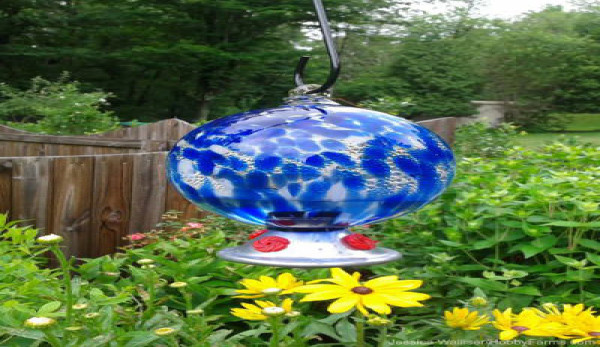 Earlier this summer I made a trip to our local feed store for someÂ chicken feed. The store was running a promotion in which all customers who spent more than $50 received a free hummingbird feeder. I was thrilled because the plastic suction cup feeder I had stuck to our dining room window for years broke last fall, and I had been meaning to purchase a new one since then.

The freebie model was really quite pretty. The container was a round, heavy glass globe and the base was a collection of four yellow and red plastic flowers. It looked beautiful hanging in the garden. I filled it with the same homemade nectar I have used for years: 1 cup of sugar boiled in four cups of water for two minutes. I watched that darned thing for three weeks and never saw a single hummingbird visit it. I thought that perhaps I was too late in putting it up, and the hummingbirds had already made a home elsewhere.

Then one day I was sitting on our porch swing and I saw a hummingbird come up to the feeder. I watched it try to stick its beak into the flower, and it was clear that it wasn’t working for the poor little thing. It quickly flew off. I walked over to the feeder to inspect the flowers a little closer and found that the center of each flower consisted of a plastic grid into which the bird must stick its tongue. However, only one of the grid openings had an actual hole that led to the nectar reserve. The rest of the openings were dead ends. How frustrating that must have been to the little hummingbirds!

So the next day, I went to a local garden center and bought another glass feeder. This one has a blue globe and four small, red flowersâ€”each with a single opening that leads straight to the nectar reserve. I have seen multiple hummingbird visits each and every day since hanging the new feeder. Clearly they have better access to the nectar this time. Proof that free isn’t always better!