Husk tomatoes are basically a wild species -- and they're easy to grow. 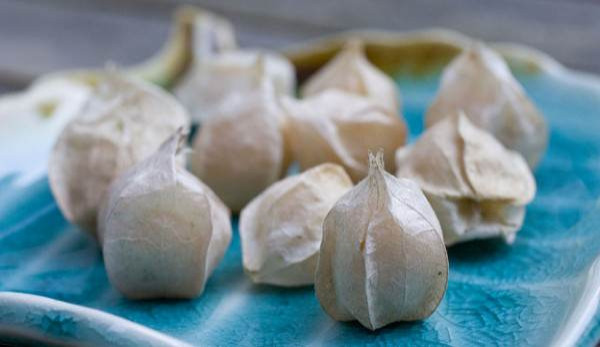 I was a bit surprised to see so many husk tomatoes in the markets last week, mostly because I thought Italians rarely ate this plant. Obviously I was wrong because IŌĆÖve seen a few fancy ice cream stores that offer tomatillo-flavored ice cream, and I will state that it tastes pretty good.

IŌĆÖm from California, where the heavy Mexican influence means that these odd little fruits are quite common. Husk tomatoes are practically the national vegetable of Mexico, and everybody there eats a lot of green sauce, which is the sauce made with the less sweet versions of the fruit. Known botanically as Physalis ixocarpa, they are also identified by several other Latin names, such as Physalis philadelphica. Northerners tend to call the fruits husk tomatoes, while most folks in Latin America call them tomatillos, not to be confused with the infamous tamarillo, which is known as the tree tomato. Tomatillos have two well-known sisters in the Physalis genus: Cape gooseberry, which is similar and cultivated commercially to a larger extent; and the charming, orange Chinese lantern flower.

Husk tomatoes are an annual crop, similar in cultivation to tomatoes, except that the plants are not quite as good at climbing, and they produce their fruits much later in the season. While tomatoes can be pushed to produce fruits in spring, husk tomatoes need a longer season before they produce fruit, so one normally sees these fruits appear in the markets starting in mid-to-late summer.

The culture of husk tomatoes in home gardens is usually a matter of managing a basically wild species. Home gardeners most often plant husk tomatoes by tossing some old fruits in the garden bed and letting the seedlings come up when they feel like it. The plant is actually a pest weed in many areas, and so gardeners often sort of herd these plants rather than culture them. IŌĆÖve always grown husk tomatoes in crowded clumps, and the crowding hasnŌĆÖt seemed to reduce the fruit production, but commercial growers plant the seedlings a foot and a half apart and maintain 4 feet in between the rows. This crop is really good for hot and dry areas. They grew like weeds in Las Vegas, Nev., but donŌĆÖt do as well on the humid coastline here in northern Italy.

The big deal in cultivation is that husk tomato plants are not self-fertile, so there need to be other plants nearby in order for the plants to produce fruits. I remember visiting a consulting client who had a single husk tomato plant growing in a big, clay pot. The plant was magnificent and covered with flowers but would set no fruit. I solved the problem by ripping one of the straggly specimens from my own patch and planting it in a little pot behind the big specimen. Within a few weeks, the big boy was churning out fruits and my client thought I was a genius. Ha!

Harvesting these fruits is a bit odd, because itŌĆÖs best to wait until the fruits drop off the plants, which means that harvesting almost every day to keep the fruit from sitting on the ground for too long is the best way to go. The fruits will continue to mature after harvest, and most people wait a few weeks or so before eating them.