I.D. and Eliminate Flea Beetles in Your Garden

Have you noticed pinholes on your nightshades or brassicas? Flea beetle damage might be to blame. 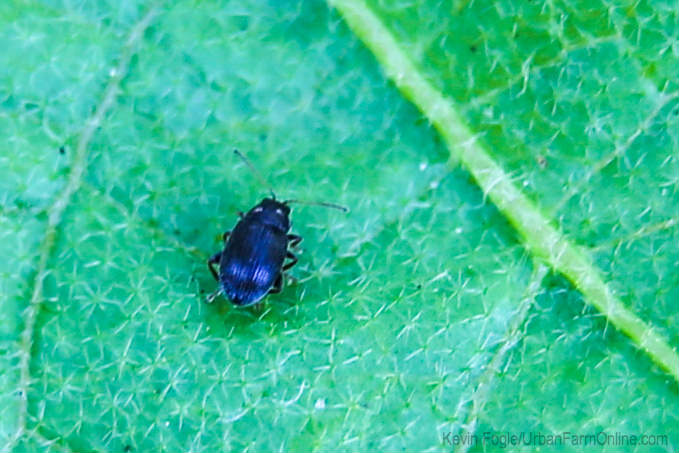 One of the regular insect pests encountered in my front-yard garden this summer was the flea beetle (Order:Â Coleoptera, Family: Chrysomelida). The common name refers to a large number of species of very small leaf beetles that jump like fleas when disturbed. Adult flea beetlesrange in size from 1/16 inch to 1/8 inch long, have large hind legs for jumping, and sport a wide variety of colorations, from dark browns to metallic shades with either solid colors or stripes depending on the species.

Known for its voracious appetite, this tiny beetle seems to be able to eat its own body weight in leaves a hundred times over. A sign of flea beetles in your garden is clusters of pin-sized holesâ€”aka shot holesâ€”across across the interior of the leaf, as if created by tiny shotgun pellets. If youâ€™ve encountered the telltale shot holes in the leaves of vegetable crops like eggplant or potato, you might be dealing with flea beetles in your garden. 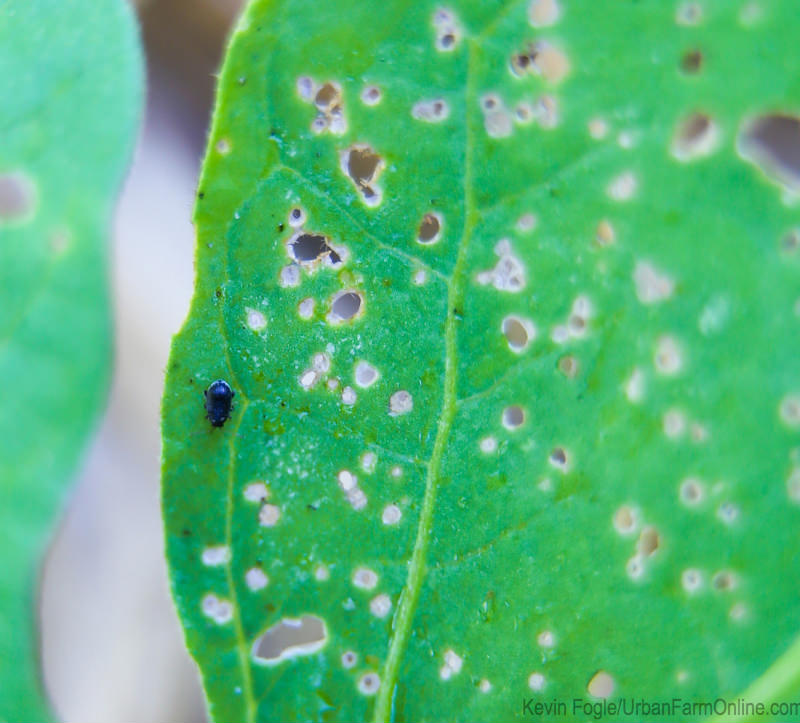 Adults typically overwinter in the ground and come out in mid-spring to feed and lay eggs near the base of their host plants. The eggs hatch after a week or so and the small, light-colored, worm-like larva emerge underground. Flea beetle larva feed on nearby root systems for several weeks but typically do not cause much harm to plants, with the exception of the tuber flea beetle, which can damage developing potatoes. When the adult flea beetles appear, they will target the vegetation of their favorite plants. Many flea beetle species donâ€™t bother garden crops, but the ones that do will seek out nightshades (eggplant, potatoes, and tomatoes) or brassicas (cabbage, broccoli, Brussels sprouts).

In my garden, the eggplants felt the brunt of the flea beetle attack. Luckily, damage to established plants by adult flea beetles plantings is minimal unless there happens to be an unusually large infestation. Flea beetles can also certainly make edible greens much less appealing but their feeding will not typically kill the plant. New seedlings being attacked by flea beetles is another story all together. Because young plants have so few leaves, the beetles can severely damage or kill young plants.

There are several environmentally friendly controls to deter or limit flea-beetle damage in your garden. To completely eliminate feeding on seedlings consider using floating row covers for vulnerable crops until the plants mature and are better able to handle flea-beetle damage. Diatomaceous earth powder can be also sprinkled on and around effected plants to help control established flea-beetle populations. Finally, fall tilling is a great preemptive strategy that will help expose overwintering adults and lower their survival rate for the next yearâ€™s growing season.