I Is For Invasives: The Vegetable Weevil

This invasive pest has made a home for itself all around the world. 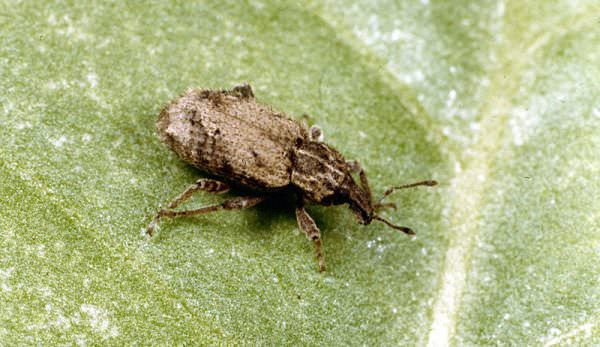 A common pest beetle species with a voracious appetite, the vegetable weevil can be a major issue for gardeners around the world. The name vegetable weevil is pretty non-specific and so are the appetites of these beetles and their larva. They can consume the leaves, stems and roots of most vegetable crops from artichokes to zucchini, though theyâ€™re especially fond of potatoes, tomatoes, carrots and cabbages.

The vegetable weevil tries to blend into its surroundings. Itâ€™s colored with combination of browns and grays across the wing covers, sometimes with a v-shaped marking, which is more obvious on younger adults and fades as the beetle ages. Unlike many weevils, the snout is broad and rather restricted and features a pair of bent antenna.

Fully grown, the vegetable weevils are quite small and typically reach about 1/4 inch long, though youâ€™ll often find some that are larger. The larval form of this pest is a pale-green-colored, segmented grub that features a dark head. Vegetable weevil grubs will grow to about 1/2 inch before maturing into its adult beetle form.

The vegetable weevil is not native to North America; rather, it hails from South America and was first noted in the United States in the early 20th century. Over the last 100 years, it has established breeding populations in the southern half of the United States, living in warm regions from coast to coast.

Weâ€™re not the only country dealing with this particular invasive insect, though. During the mid-1900s, this species of weevil reached most major continents due to global trade of agricultural goods. In suitable warm environments, the vegetable weebil is found everywhere from Europe and Africa all the way to Australia and New Zealand. The global case of the vegetable weevil illustrates the importance of future controls and inspections of agricultural/horticultural shipments to prevent the introduction of new invasive species both here in the United States and around the world.

There are several organic controls for vegetable weevils that are effective for destroying feeding adult beetles. These treatments include pyrethrins and insecticidal soap sprays. To limit future populations of the weevils, try to clean up plant debris and weeds throughout the season and quickly remove host plants that have finished fruit production.