The medium-sized Icelandic are a good triple-purpose sheep: They offer meat, milk and the versatile, double-coated fleeces grown by this breed charm hand spinners with a wide and lovely range of natural colors. . 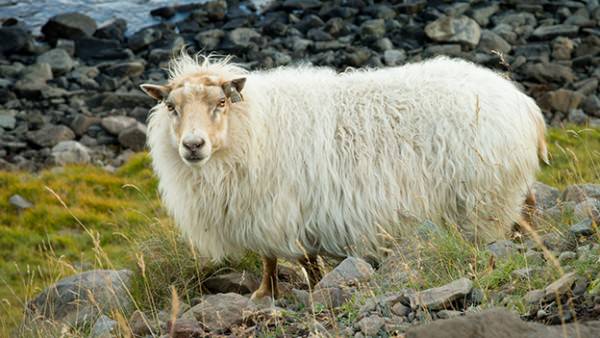 Use: The medium-sized Icelandic makes a wonderful triple-purpose addition to the farm. The versatile, double-coated fleeces grown by this breed charm hand spinners with a wide and lovely range of natural colors.  Their double coat consists of a soft, lustrous, inner “Thel” and a longer, coarser, wavy outer “Tog.”  Fast-growing Icelandics make fine, lean meat animals; in Iceland, they’re bred almost solely for this purpose.  The skins transform into gorgeous rugs and clothing, too.  Once used extensively in dairy production, the breed again seems to be catching on as a producer of milk and cheese.

History: The Icelandic, a breed that has remained virtually unchanged for over 1,000 years, may be the oldest and most genetically pure sheep breed in the world.  Modern Icelandics descend from sheep ferried by Vikings to Iceland during the 9th and 10th  Centuries.  Attempts to “improve” the breed by outcrossing generally resulted in increased vulnerability to disease, and so raisers on this island nation decided to keep their selective breeding attempts confined within the breed.  A small flock of these sheep finally entered Canada in 1985, and during the 1990s the breed found its way down to the U.S.

Conformation: As part of the North European short-tailed sheep group, Icelandics have a naturally short tail that requires no docking (in fact, docking disqualifies animals from registration in North America). These sheep have a stocky, short-legged build, with rams weighing in at about 180-220 pounds and ewes running around 130-160 pounds. They can be horned or polled. Those lush fleeces come in white and shades of gray, black, and brown, and they can also exhibit many different patterns. The water-resistant outer coat can reach 15 inches in length. Icelandics have alert, active, somewhat nervous personalities and a poor flocking instinct.

Special Considerations/Notes: Icelandic ewes mature early into prolific, long-lived, seasonal breeders. They have few difficulties lambing, usually producing vigorous twins (and often triplets), and like many primitive breeds, they possess good mothering skills. These tough, feed-efficient sheep excel on pasture and rocky, hilly terrain, plus they tend to be resistant to disease.