It's important to know your enemy, and as a chicken-keeper, a big part of predator prevention is identifying the animals trying to hunt your flock for food. 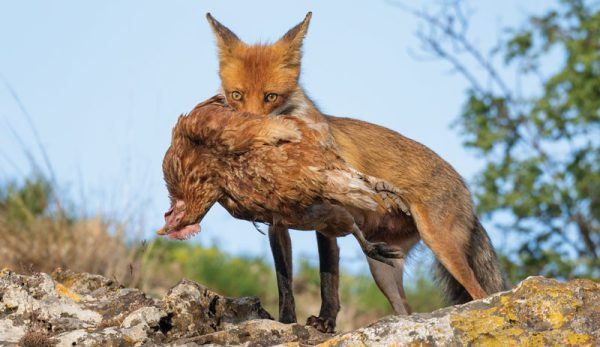 If it hasn‚Äôt happened to you yet, it will. Anyone with chickens knows the feeling of going to the pen and finding fresh eggs have disappeared or worse: Your chickens are dead. It‚Äôs a terrible feeling that can‚Äôt be avoided altogether if you own chickens. Unfortunately, chickens are toward the bottom of just about any farmyard food chain, and a chicken dinner is too tempting for a predator to resist.

You get picked on when you are 10 inches tall and can‚Äôt fight all that well. That‚Äôs the fate of many chickens.

But to keep your chickens safe, you have to be proactive and vigilant. It starts with understanding the dangers your flock faces and working diligently to stave off the intruders. In reality, all sorts of hazards wait to prey upon your flock.¬Ý

Chickens aren‚Äôt only tasty to us, but they‚Äôre tasty to a whole menagerie of wildlife that lives on the periphery of humans. While many critters live harmoniously around our chickens, you never see any of the potential threats coming or going.

Every now and then, however, a predator gets the taste of chicken.¬Ý

Raccoons are one of the most common mammals found in the United States. Highly adaptable, they range from the Central American isthmus north to southern Canada and can be found living in rural and urban areas alike. Raccoons are also crafty, intelligent and have articulating fingers to manipulate the environments around them. They are masters at figuring out how to get to your chickens. As the old saying goes: ‚ÄúGive them an inch, and they‚Äôll take a mile.‚Äù

If you find your hens dead and only their heads were eaten, it was probably a raccoon. If they can‚Äôt get in, kill and eat the entire bird, they‚Äôll grab the chickens by the head, pull them through the wire and eat what they can. If you find headless chickens lying near the fence, chances are a raccoon did it.¬Ý

Consequently, chickens are especially vulnerable to raccoon depredation at night. Raccoons are egg eaters as well. However, when they eat eggs, they leave quite a mess.

Opossums are the only marsupial found in North America. Therefore, opossums are gestated in a womb and birthed live.

After birth, their young migrate into a pouch on the female‚Äôs belly. There, they nurse and continue to mature until they can live beyond their mother‚Äôs body. Smaller than a raccoon and about the size of a house cat, opossums are nocturnal and move slow in their search for food. These mammals resemble giant rats and are widespread across the U.S. except for the Mountain West.

Like raccoons, opossums are omnivorous. They‚Äôll rob food from your compost pile and steal kibbles from your trashcan. While not a classic chicken killer, opossums are in the predator category of nest raiders. They have a propensity for stealing eggs and may occasionally kill a chick.¬Ý

When they raid a nest, they generally do a thorough job cleaning up their mess, although they will leave a few shell scraps and some egg interior behind.

Read more: Are opossums friend or foe to the chicken-keeper?

One day I walked out to my coop and saw a hole torn in the top of the wire. Counting the chickens, I saw they were all accounted for. The next day I went back out to the coop and saw a bobcat in the chicken run. He had eaten the entrails and some of the breast from a chicken, and when he saw me, he escaped from the new hole he‚Äôd torn in the fence.

When I counted the chickens, two were dead, and two were missing. I scoured the woods behind my house to see if they‚Äôd escaped and were foraging. Instead, I found them covered with leaves and twigs‚Äîclassic caching behavior exhibited by bobcats.

Bobcats are found over the entire U.S. into southern Canada. They are enigmatic mammals and rarely seen. But bobcats are everywhere. In fact, some of the highest bobcat densities found anywhere are suburban bobcats that live in the Dallas/Fort Worth metroplex.

Like foxes, bobcats will take the entire bird and hide it in a cache for later consumption.

You‚Äôve heard all the sayings: ‚ÄúCrazy like a fox,‚Äù or ‚ÄúDon‚Äôt let the fox guard the henhouse.‚Äù They all make sense when you put the expressions in context with how crafty a fox is as a hunter and hence chicken predator. These small canines are witty, intelligent and adaptable.

Where you live in the country depends on the type of fox you‚Äôll see. The red fox and the gray fox are two species that inhabit the U.S. Red foxes are found in Alaska, Canada and much of the states (except for the Desert Southwest).

Gray foxes are found across much of the lower 40 states.

If your chickens go missing completely, suspect a fox. Foxes will take eggs and live chickens and leave no trace. They‚Äôll often steal more than one chicken in a raid and cache it nearby to eat later.

Skunks are primarily egg stealers, but this stinky predator will also eat the entrails from a chicken given the opportunity. Skunks are common mesomammals. The striped skunk is the most widely distributed species of skunks.

However, in the southwestern U.S., hooded and hognose skunks are also present.

Learning to discern if a skunk‚Äôs been present is easy: Just smell for them. While skunks spray when threatened, that musky smell follows them everywhere. If they are startled by one of your chickens, they‚Äôll spray to defend themselves. Skunks will dig, but it‚Äôs unlikely they‚Äôll purposefully target your chickens. Instead, they are more opportunists than anything else.¬Ý

Read more: Protect your poultry by design with a strong coop and run.

Bobcats are stealthy, foxes are sneaky, and raccoons and the others come in the night. The coyote, however, is the most daring predator of all the chicken killers. Once, while preparing supper in our country kitchen, I stood at the kitchen sink and looked out the window, watching our chickens peck around in the backyard.¬Ý

While the chickens were oblivious to their surroundings, I was not. As I watched out the window, I saw a young, healthy coyote lurking in the brush beyond our manicured backyard, where the chickens were. When I ran outside to intervene, the song dog was about to make his final lunge for the poultry.

Coyotes are the ultimate opportunists, and like bobcats, they‚Äôre highly adaptable and live in the suburbs and rural environs. Cunning, they‚Äôll essentially formulate a plan before they raid your chickens‚Äîstealing one before running off into the wild. As such, you can find them all over the continent.

While coyotes will dig, they aren‚Äôt as dangerous to chickens that stay penned up. Instead, they prefer to catch the ones that free-range.

Snakes (we‚Äôll use that term generally) aren‚Äôt much of a threat to grown chickens. Instead, they eat eggs and chicks.

The problem is that when snakes eat, they eat their food whole. Therefore, you might never see any evidence of their presence unless you catch them in the act. While there isn‚Äôt one single species of snake that affect your chickens, any snake big enough to swallow an egg can make an impact.¬Ý

Snakes are especially difficult to control because they can wiggle through the tiniest crevices. I‚Äôve often caught a snake in the henhouse when they got in, swallowed an egg whole, and then couldn‚Äôt get back out of the same hole because of the egg they‚Äôd yet to digest. Therefore, watch for small cracks and crevices in your henhouse and keep them covered.

Snakes can climb walls, too, and you‚Äôll be amazed at how they can get into a place you thought impossible.

Like snakes, several species of hawks and owls can affect your chickens. If you find chickens missing or a carcass plucked and eaten, chances are it was a hawk or owl.¬Ý

The difference is that hawks hunt during the day and owls hunt at night. Chickens locked up in a house at night aren‚Äôt susceptible to predation. The same holds true during the day. Chickens confined to a run are safer from avian predators.¬Ý

While dogs and cats hold a special place on our farms, they can also be deadly to chickens. Growing up, I remember a farm dog or two running through the hen flock for fun only to have their creator instincts kick in and a chicken end up dead. Alternatively, cats are deadly on chicks and chickens as well.

After all, they are predators. Predators will do what‚Äôs instinctual.

While there‚Äôs no one way to acclimate household pets to your chickens, just make sure your pets are fed well and often to eliminate the urge to take an easy meal. In addition, admonish your pets whenever they attempt to disturb your chickens.

Aside from your pets, watch out for feral animals like stray dogs and cats that may affect your flock. Feral cats are especially deadly to all kinds of birds. Therefore, use appropriate animal control measures to take care of any wild dog or cat problem.

If a predator is discovered, animal control is always an option. That means dispatching the animal by killing it or relocating it to another place. Whatever you think is the best course of action, you must check your local game laws and regulations to see what your options may be.

In general, for example, hawks and owls are protected animals, so you just can‚Äôt go around killing them. Do your homework, find out what you can and can‚Äôt do in predator control, and build your plan accordingly.¬Ý

The best chicken predator control, though, is prevention. Stay diligent and predators will soon learn your chickens aren‚Äôt an easy meal. They will lose interest in your flock.¬Ý

Living with predators around can be daunting, but you can mitigate predator damage that they may do to your chicken flock with good planning. Diligence and fidelity to your flock is vital. It‚Äôs an ongoing job, and the better you stay on top of the potential problem, the safer your chickens will be.

It‚Äôs better to play offense against predators rather than be related to playing defense. With that in mind, follow these tips.

Used by hunters to scout for game animals, you can employ game cameras around your chicken coop to be your eyes in the field to spy on what may be snooping around. A motion-activated basic camera will cost you about $50.

In contrast, cameras that instantaneously send an image to your smartphone cost a little more. Either is effective in helping you scout what‚Äôs snooping around your chickens when you aren‚Äôt there.

This is a no-brainer, but it may be the most effective strategy. By checking your pen daily, you can look for holes in the wire or coop, dig marks around the outside of the enclosure, or animal tracks or droppings. You‚Äôll be able to stay ahead of any developing threats.

This article originally appeared in the September/October 2022 issue of¬ÝChickens¬Ýmagazine.

Russell Graves is a hobby farmer from Dodd City, Texas. With a degree in agriculture education, Russell spent 16 years as an agriculture science instructor in Childress, Texas, where he was named Texas Agriscience Teacher of the Year on three occasions. Since leaving the classroom in 2009, he‚Äôs made his living by writing and photographing topics in the fields of agriculture, conservation and the outdoors.