Important Tips For Traveling With Chickens

Sometimes you need to move your chickens from one point to another, so keep these things in mind when traveling with your birds. 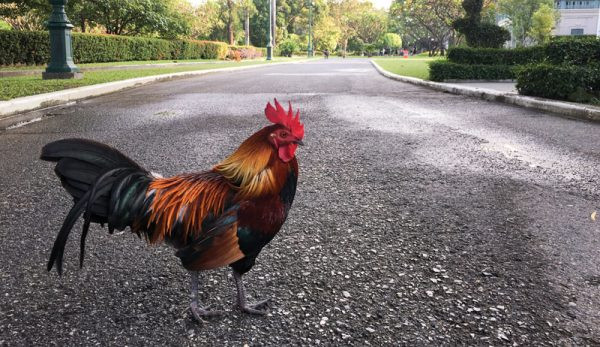 When it comes to having chickens, a road trip is occasionally required. Whether thatās a long distance move or a short trip to a vet, the goal is the same: Get the chickens to their destination as easily and stress-free as possible.Ā

When traveling with chickens, theyāll certainly need a secure shelter in which to dwell. You canāt simply open the car door and buckle them in. Different people choose different shelters, such as a pet carrier/kennel, wire cage or even a cardboard box with plenty of air holes.Ā

Personally, I use a large, cardboard, moving box modified with some large cutout areas for ventilation. The top flaps provided versatilityādarkness when closed and to keep chickens contained, or opened to easily access the chickens.

I place the box in the backseat area with the seat lifted up and the box on the floor. I line the bottom with a towel and some hay for comfort and stability and include food and water bowls. This setup worked well for a recent 10-hour trip with a few stops along the way.Ā

Andrew Taylor, a chicken-keeper in the United Kingdom, also has used cardboard boxes and recommends lining them to prevent leakage. Chickens get ārunny poos from stress,ā he says, and if itās a long trip āitās going to seep through.ā He also recommends two chickens to a box. More than that and you can end up with droppings on top of them, which can be a significant health hazard.

Taylor believes boxes are best because chickens like the dark. Darkness can help keep them calm, as they have less visual stimuli to take in.Ā

Kathi Rodgers, a chicken-keeper and blogger at Oak Hill Homestead, used a dog crate for her chickens when she moved to Oklahoma. She took six Buff Orpington hens in a large wire crate with a thick layer of straw on the bottom. She attached water and feed dishes to the wire.Ā

āWe checked the water level each time we stopped for gas and added more, if needed,ā she says, ābut we didnāt fill it completely to help prevent sloshing water.ā For a short trip for a single chicken, Rodgers says a small pet carrier with a layer of straw works well. The straw helped keep their feet clean and keep them from slipping on the hard plastic surface.

You can also build an enclosure for the trip. Jeremy DuCheny, a food blogger at One Thousand Foods, uses wire cages that he builds himself for long hauls of multiple chickens. He currently has about 40 chickens and has transported chickens many times.Ā

āThese cages are basically just a box framed with rectangles built with 1-by-2 lumber and covered in wire fencing,ā he says.Ā

āThis box doesnāt have to be too tall but can be built wide enough to fill an entire truck bed. We put straw on the bottom of the pen and, if needed, hook a nipple waterer or feed tray to the side. Ideally, the truck would have a topper as well, so going down the road, the wind speed doesnāt freak the birds out.āĀ

Bethany Scott, from Rural Living Today, uses a laundry basket to take chickens to the vet. āWe put them each in a small laundry basket with a layer of alfalfa on the bottom,ā she says. To keep them busy she includes ābits of strawberries, including the tops for them to pick at, within the alfalfa.ā

Itās important to make chickensā environment comfortable when traveling. Try to see things from their point of view. They can be sensitive to temperatures, especially heat.

The last thing you want is heat stress, which affects egg production and can be fatal. Signs include panting, rapid breathing, lethargy, and pale combs and wattles. On my trip, I made sure it didnāt get too hot and that there was good ventilation. As needed, I cracked a window or turned on the air-conditioning (not blowing directly at them).Ā

Be sure to have your car inspected before a long ride to give you peace of mind. The last thing you want is for the air-conditioning to be on the fritz, causing stress to your birds.Ā

Keep chickens out of direct sunlight when traveling. If theyāre in a wire cage, a thin blanket or towel draped over some of the cage is an option. In addition to shade, it provides privacy and therefore more comfort for the chicken.Ā

You can even bring along a cooler or metal bucket with ice and add a couple ice cubes to a dish or offer chilled treats such as a little watermelon, cucumber or chopped-up leafy greens. Providing frozen water bottles chickens can lay up against is another option.Ā

For extra hydration, consider mixing up an electrolyte mix such as Sav-A-Chick. Adding electrolytes to their water when you get back is a good idea as well.Ā

Noise can also be a nuisance. Itās best to drive without any music playing, but if you must, try soothing classical music. (Your chickens may or may not like it, though.) Minimize other sounds, too, such as the car horn or loud phone sounds.

Minimize abrupt stops and starts. Drive smoothly, and make sure the chickens have a secure enclosure and bedding so they donāt slip and arenāt jostled around too much.

Chickens should also feel secure and have some sense of privacy. An open cage for example might make them feel overly exposed. A towel draped over can provide privacy as well as shade.Ā

If housing more than one chicken together, pick ones who generally get along and check to make sure they are getting along during the trip.Ā

Check on the chickens every couple of hours, making sure they have water and food and are comfortable, and that their living space is relatively clean. Bring extra bedding, a poop scooper, a trash bag, etc. to clean up as needed, as well as plenty of water for refills and some food.Ā

Itās also good to keep an extra empty cage/crate/cardboard box on hand just in case you need to separate chickens or take one to a vet or some other unexpected scenario.Ā

As the saying goes, familiarity breeds comfort. To keep chickens more comfortable, keep things familiar when traveling. Use some familiar bedding such as straw from the nesting box to line the bottom of the travel carrier. Let close buddies ride together in the same carrier (if itās big enough) or be able to see each other.

Use familiar dishes for food and water.Ā

Try to keep the routine the same. For my situation, I had to leave in the early morning while it was still dark out so I kept the cardboard box flaps closed and tried to keep things quiet like it is while chickens sleep at night. Come sunrise, I opened the top of the flap temporarily so the chickens could see daylight like normal. I also fed the same food as usual, along with a few treats of course.Ā

Philip Weiss, a chicken-keeper and travel blogger, also recommends preparing the enclosure at your new destination ahead of time. āThis means fresh food and water, clean bedding, and an enclosure that is safe from predators. This will ensure that your chickens can go straight back to normality after the drive.āĀ

Read more: Are chickens cannibals? No … but sometimes yes (kinda).

Chickens may act a little different during and after traveling. Some chicken-keepers report egg-laying changes such as a brief break in laying after a road trip. Mine werenāt that interested in food during the trip. Giving a few treats such as fruit or a small handful mealworms garnered more interest.Ā

Of course, donāt overdo it on the treats. A small handful is plenty.Ā

After the trip chickens might also take a little while to feel normal (or settle in if youāve moved to a new place). Make them as comfortable as possible and keep up a normal routine. I kept mine on the house deck in an outdoor dog kennel for a few days while I finished up their new coop.Ā

Traveling with chickens may feel daunting, but itās completely doable. In my experience, Iāve found chickens to be easy travelers. Hopefully, some of these tips will prove useful to you when transporting your flock!Ā