In Defense Of Okra (Excerpt From The Whole Okra)

In this excerpt from the James Beard-winning book The Whole Okra, chef and author Chris Smith tells us how he first fell in love with the Southern crop. 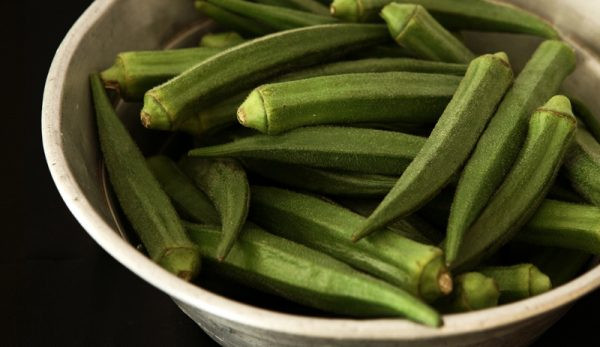 This article is an excerpt from the book The Whole Okra: A Seed to Stem Celebration (Chelsea Green Publishing, 2019).

In 2006, at the tender age of 26 (not yet woody), I experienced okra for the first time. I was at a roadside greasy spoon somewhere east of Clayton, Georgia. It was my first time in the United States, visiting an old friend, Snowy, from Wales. Snowy had been living and working in Greenville, South Carolina, for about five years. Practically a local, he pushed a bowl of fried okra toward me.

Snowy was having a joke. The grease from the okra saturated the greaseproof paper. The little round lumps looked like sections of wooden dowel, rolled in sawdust and deep-fried. The way Snowy was stifling a laugh; the way he wouldnâ€™t take the first bite . . .

Okra was not being taken seriously.

It was slimy, greasy and tasteless and only good for playing tricks on tourists. I didnâ€™t understand the slime at all. Undercooked egg whites, perhaps. Slug slime or the saliva from the mouth of an alien. The grease I knew well from back home. This was grease that had been used over and over. This was fast-food grease, cheap and nasty. And the taste? I remember none.

That was my first experience with okra, and I understand why some people never give it a second chance. Some people never give it a first one, such is its reputation. I canâ€™t tell you how many people responded to the knowledge that I was writing a book on okra with, â€śYuck! Okra,â€ť or â€śEwww, slimy.â€ť In an episode of Good Eats dubbed â€śOkraphobia,â€ť celebrity chef Alton Brown said, â€śIf you donâ€™t find a way to push past this slime business, youâ€™re going to regret it.â€ť

You are going to regret it! Not embracing okra because itâ€™s slimy is like not visiting the Alps because youâ€™re scared of heights. Youâ€™re missing out on so much because of one small, manageable aversion.

In 2012, six years after my first encounter, I experienced okra for the second time. I was back in the U.S., this time engaged to Belle Crawford. Yes, it is true. I married someone from South Carolina called Belle, which technically makes okra the second southern thing I fell in love with. Belleâ€™s family is from a long line of southerners, but they are inclined to break with southern social conventions from time to time. Thatâ€™s how I found myself invited (obligated) to Belleâ€™s bridal shower, helping her take part in the awkward ritual of receiving and opening presents in front of a crowd of women I didnâ€™t really know.

One present bestowed on us that day changed my life. The gifter was Linda Lee, an old school friend of Belleâ€™s who worked as a botanist in Georgia. The gift was a shoebox full of Indian-inspired spices. Being from England, where the national dish is chicken tikka masala, and having traveled to India, I found the spices exciting enough. But hidden within that shoebox was an enigma: a single, dried okra pod.

India is the leading producer of okra, where it is called bhindi and eaten widely. So there is a chance I may have eaten okra, hidden in the depths of a curry, sometime in my past and unknowingly. But it was at the wedding shower that I really acknowledged the existence of okra for the first time. Linda explained that the pod, which was filled with okra seed, had come from seed she had bought and grown from a roadside farm stand in Rosman, North Carolina. The okra had been grown by the farmerâ€™s family and saved by the farmerâ€™s family, and I now owned a piece of that heritage. This little pod weighed heavy with responsibility and possibility; it was a new feeling. This was before I started working for Sow True Seed, a small seed company in Asheville. Before I had a garden to call my own. Those okra seeds had a history and, if I chose, a future. This was nothing like the throwaway ooze from Clayton, Georgia. This was serious. I was compelled to grow it, and so I did.

I now remember my wedding anniversary by how many years Iâ€™ve been growing that okra (six years); I decided to call it Rosman Wedding. That single pod inspired me to dive deep into the world of okra, perhaps deeper than any British person has ever gone. I admit I am an unlikely champion of okra. Garden writer and humorist Felder Rushing has begun calling me the Okra King of America; itâ€™s a funny joke, but I donâ€™t lay claim to that title. Nor do I take the enormity of okraâ€™s history, or its presence in America, lightly.

In West Africa, where okra is widely grown, where people were stolen and enslaved, the Akan people have a concept of a three-part destiny: okra, mogya and sunsum. Oneâ€™s okra is somewhat similar to oneâ€™s soul, and among the Akan it is believed that a personâ€™s okra receives their destiny at birth, along with certain attributes to aid in that destiny. 1

Read more: Learn how you can grow okra in your garden, too!

It seems that my okra was destined to write a book on okra, and that all the events of my life have led me to this point. As a white British guy, I am fully aware that okra is not a part of my culture or heritage. I have, however, fallen in love with okra and have tried to approach my book with integrity, and a deep appreciation of people and food. While okra is grown and enjoyed around the globe, my experiences with it are in the American South, and so I must always remember and honor all the terrible things that happened to allow okraâ€™s presence and my eventual connection with it. I must remember and honor the incredible influence of African Americans on our food culture, and okra is just a small part of it.

I am not King Okra; I am okraâ€™s humble servant, and as the stars align, I find myself stumbling upon discovery after discovery, story after story, variety after variety, use after use, of this completely amazing crop called okra, gumbo, bhindi, ladyâ€™s fingers and ochro. But still, I sometimes wonder why am I so excited about okra when the average response is closer to Stephen Kingâ€™s, â€śNooo, I donâ€™t want okra. No okra. No.â€ť 2

I know there are a lot of other okra fans, fanatics even, out there. And for many okra is ingrained as part of their history and culture. The first time I gave a presentation titled â€śIn Defense of Okra,â€ť the random outbursts of okra enthusiasm from the audience surprised, distracted and delighted me. This book is for all those fans, to vindicate your joy in okra and inspire you to take it to the next level. But this book is also for okra doubters and haters; in many ways this book is written in defense of okra. Chef Virginia Willis tells us, â€śFolks love okra or they hate it. No one â€” veritably no one â€” is in the middle.â€ť

This excerpt originally appeared in the November/December 2020 issue of Hobby Farms magazine. Chris Smith is the executive director of The Utopian Seed Project and the James Beard Award-winning author of The Whole Okra: A Seed to Stem Celebration (Chelsea Green Publishing, 2019). Follow him on Instagram @blueandyellowmakes.