Inglorious Fruits and Vegetables: A Campaign Against Food Waste

A supermarket in France comes up with campaign to sell imperfect fruit and veggies. 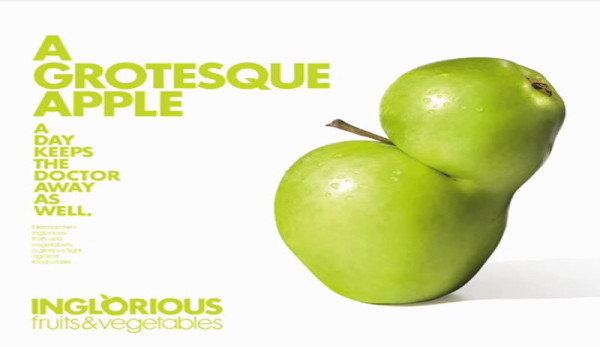 Have you ever come across an odd-looking fruit or vegetable at your supermarket? What about at your local farmerâ€™s market? Maybe youâ€™ve seen one or two in your own garden. Buyers pick up the fruit, examine it and put it back. They do the same with the vegetable. Sometimes it goes uneaten, thrown out because itâ€™s unlikely to sell.

According to European Union regulations, farmers cannot even attempt to sell imperfect fruit or vegetables, even if itâ€™s edible. Appearance and size are key.

This regulation results in farmers throwing out 300 million tons (over 600 million pounds) of goodâ€”although non-compliantâ€”fruits and vegetables each year. To waste that much food is absurd, as the video states.

IntermarchĂ©, a French supermarket chain, has come up with a brilliant idea. Dubbed Les fruit et lĂ©gumes moche (Inglorious Fruits and Vegetables), the idea is to eliminate food waste. How are they doing it? By celebrating the “beauty of the Grotesque Apple, the Ridiculous Potato, the Hideous Orange, the Failed Lemon, the Disfigured Eggplant, the Ugly Carrot, and the Unfortunate Clementine,â€ť according to the video blurb on YouTube.

IntermarchĂ© took to print, television, film, Facebook, Twitter and YouTube to promote the Inglorious Fruits and Vegetables campaign. They offered the produce at a 30 percent discount, and gave hesitant customers juice and snacks made from the fruit and vegetables to taste.

Shoppers soon discovered that just because the produce looks different doesnâ€™t mean it tastes different, and purchased 1.2 tons (2,645 pounds) of the product per store each day.

Should the U.S. join this campaign? How successful do you think it would be?

Read more about other ways to sell fruits and vegetables: