A study shows that pesticide use in grasslands is the No. 1 contributor to the decline of grassland birds in the United States. 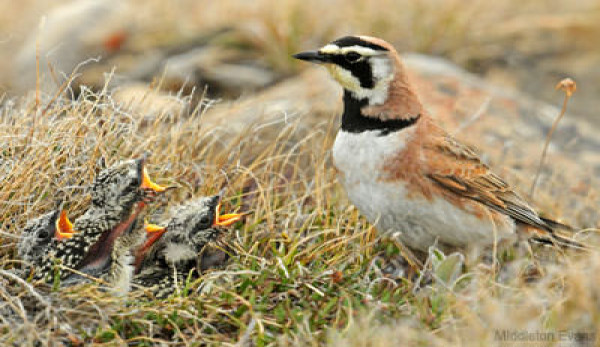 A new study led by a preeminent Canadian toxicologist identifies acutely toxic pesticides as the most likely leading cause of the widespread decline in grassland-bird numbers in the United States, a finding that challenges the widely-held assumption that habitat loss is the primary cause of those population declines.

The scientific assessment, which looked at data over a 23-year periodâfrom 1980 to 2003âwas published on Feb. 20, 2013, in PLOS One, an online peer-reviewed scientific journal. The study was conducted by Dr. Pierre Mineau, recently retired from Environment Canada, and MĂŠlanie Whiteside of Health Canada.

The study looked at five potential causes of grassland-bird declines besides lethal pesticide risk: change in cropped pasture, such as hay or alfalfa production; farming intensity or the proportion of agricultural land that is actively cropped; herbicide use; overall insecticide use; and change in permanent pasture and rangeland.

“What this study suggests is that we need to start paying a lot more attention to the use of pesticides if we want to reverse, halt or simply slow the very significant downward trend in grassland-bird populations,â Mineau says. “Our study put the spotlight on acutely toxic insecticides used in our cropland starting after the second world war and persisting to this dayâalbeit at a lower level. The data suggest that loss of birds in agricultural fields is more than an unfortunate consequence of pest control; it may drive bird populations to local extinction.â

Many grassland-bird species have undergone range contractions or population declines in recent decades. In fact, analyses of North American birds indicate that these birds are declining faster than birds from other biomes. Habitat protection has long been considered a central pillar in efforts to stem the decline of grassland-bird species, such as the vesper sparrow, the ring-necked pheasant and the horned lark.

“We are still concerned about loss of habitat in agriculture, range management and urban development,â said Cynthia Palmer, manager of the Pesticides Program at American Bird Conservancy, a leading U.S. bird-conservation organization. “This study by no means diminishes the importance of habitat fragmentation and degradation. But it suggests that we also need to rein in the use of lethal pesticides in agriculture, and that we need to be especially careful about any new pesticides we introduce into these ecosystems, such as the neonicotinoid insecticides. It reminds us that the poisonings of birds and other wildlife chronicled a half century ago by famed biologist and author Rachel Carson are by no means a thing of the past.â

The researchers focused on the extent to which lethal pesticides, such as organophosphate and carbamate insecticides, are responsible for the decline in grassland-bird populations. The study found that lethal pesticides were nearly four times more likely to be associated with population declines than the next most likely contributor: changes in cropped pasture, an important component of habitat loss associated with agricultural lands.

The publication says that “large quantities of products of very high toxicity to birds have been used for decades despite evidence that poisonings were frequent even when products were applied according to label directions.â

The authors argue that only a small proportion of total cropland needs to be treated with a dangerous pesticide to affect overall bird population trends. The production of alfalfa stands out for its strikingly high chemical load, constituting the third highest lethal risk of any crop based on toxic insecticide use. Pesticide drift from croplands is also affecting birds that favor the adjoining grasslands.

Using data from the U.S. Geological Surveyâs North American Breeding Bird Survey for the years 1980 to 2003, the study found that population declines of grassland birds were much more likely in states with high use of toxic insecticides lethal to birds. The species with the greatest number of declines included the eastern meadowlark (declining in 33 states), the grasshopper sparrow (declining in 25 states), the horned lark (declining in 25 states), the ring-necked pheasant (declining in 19 states) and the vesper sparrow (declining in 18 states). The states with the greatest number of declining grassland species were Minnesota (12 species); Wisconsin (11 species); and Illinois, Michigan, Montana, Nebraska and New York, all with nine species.

The current study relies on pesticide data from the 1980s and early 1990s, a time when organophosphates, such as diazinon and chlorpyrifos, and carbamates, such as carbofuran and methomyl, were still largely in vogue. Since that time, a new class of insecticides, the neonicotinoids, have soared to the top of global pesticide markets. A major toxicological assessment will soon be released by the American Bird Conservancy showing that birds and other organisms will not fare much better under the new pesticide regime.