Medusahead could wipe out native grasses and severely decrease the value of grazing lands if it continues to spread, research shows. 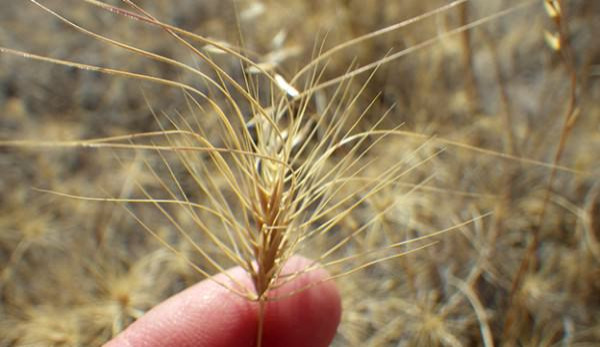 Farmers in western states need to be aware of to an invasive grass species that is making its way across the country and ruining grazing pastures.

A new field study by scientists from Oregon State University and the USDAãs Agricultural Research Service confirms that the weed medusahead has growth advantages over most other grass species, suggesting it will disrupt native ecosystems and make millions of acres of grazing land almost worthless as it spreads.

The research was one of the most comprehensive studies comparing the relative growth rate of musahead to that of other competing species in natural field conditions. It found that medusahead has a faster growth rate, a longer period of growth and produced more total biomass than even cheatgrass, another invasive grass species causing major problems.

ãMedusahead is now spreading at about 12 percent a year over 17 western states,ã says Seema Mangla, a researcher in the OSU College of Forestry. ãOnce established, itãs very hard to get rid of. It displaces native grasses and even other invasive species that animals can still eat. Unless we do more to stop it, medusahead will take over much of the native grassland in the West.ã

Research is identifying some other grass species, including crested wheatgrass and Sandbergãs bluegrass, that may be able to compete with medusahead, reduce its spread and preserve the grazing-land value, Mangla says. Scientists are also studying new ways of restoring medusahead-infested areas. But so far, medusahead has received very little attention compared to other threats such as cheatgrass, even though it ultimately poses a far greater threat to ecosystems across the West.

Cheatgrass is a serious problem on more than 50 million acres, Mangla says, but grazing animals can still eat it. The new study makes it clear that cheatgrass and native grasses may all eventually be replaced by medusahead, which eliminates more than 80 percent of the grazing value of land.

Experts at the Oregon Department of Agriculture say that once land is invaded by medusahead, it becomes incapable of supporting native animals, birds or livestock.

The sharp and twisting points on the tips of medusahead injure the eyes and mouths of animals, giving the plant its name, based on the female creature of Greek mythology who had hair composed of writhing snakes. The plant takes up other soil resources, and its deep root system soaks up limited moisture. It creates fuel for wildfires, has a high silicon content that wears away the teeth of animals, is practically inedible and prevents many other plants from germinating.

According to the new study, ãAnnual grass invasion is driving one of the largest changes in vegetation structure ever documented. This conversion has major negative impacts on ecosystem function, wildlife and fire regimes. ãÎ We expect that medusahead will continue to invade both native perennial and less-undesirable invasive annual grasslands, because of its higher relative growth rate and extended period of growth.ã

Medusahead is not a new problem, only a rapidly worsening one. Native to the Mediterranean region, it was imported to the United States in the late 1880s and has gradually established footholds since then.

Itãs now found on about 2.5 million acres in the U.S.ãmuch less than other invading species such as cheatgrassãbut itãs widespread in the Pacific Northwest and most of Oregon. Its impact on ecosystems when established is far greater than some other species, experts say, and it has evolved many traits that allow it to invade North America.

ãFor too long, weãve treated these invasive species as something you just mow, spray with herbicides, or chop out somehow and then forget about them,ã Mangla says. ãThat just treats the symptoms but doesnãt get to the underlying problem. If weãre going to stop something like medusahead, we have to better understand its ecology and find ways to compete with it.ã

Thanks to the recent study, researchers now have a better target to aim at identifying plants that have some ecological characteristics similar to medusahead and that may be able to better compete with it once established, she says.

ãHowever, this plant is easier to keep out than it is to get rid of,ã Mangla says. ãThe time to stop it from taking over the West is now, before it becomes much more widely established.ã