Sow's milk doesn't contain enough iron for newborn piglets. Where you raise the piglets determines how you ensure they get what they need. 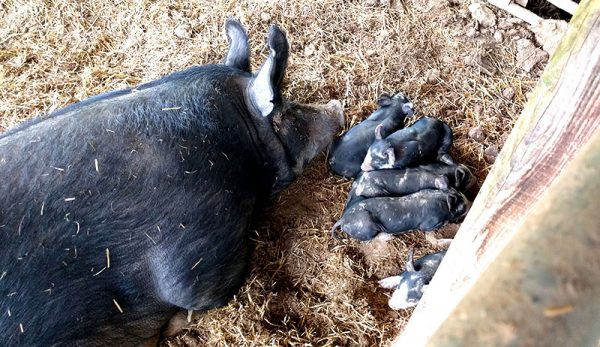 Pigs are like humans in manyÂ ways. Their eyes, for instance,Â are structured in a similarÂ manner, a fact thatÂ surprises a lot of first-time farmers: Locking stares with a swine can feelÂ eerilyÂ familiar. A pig also has the same digestiveÂ systemÂ as you andÂ me, with identicalÂ thoracic and abdominal organsÂ receiving, processing and vacating ingested food.

PigsÂ differ from humansâ€”and most other animals, in factâ€”in that their mothers’ milk alone isn’t enough to sustain newborn offspring. Sure, piglets rush to the teats after birth to deriveÂ sustenanceÂ fromÂ sow’s milk, without which they would surely die. But sow’s milk lacksÂ sufficient ironÂ that, if not delivered in one manner or another, will cause nursing piglets to die. When a piglet is born, it has limited amounts of theÂ mineral inÂ its body and, unable to receive an adequate amount from mother’s milk to sustain itsÂ rapidÂ growth rate, needs it from another source.

Weird, right? Is this an oversight of mother nature or a mutation from years of cross-breeding?

Well, neither. The low iron in a sow’s milk is no deficiencyâ€”it’s exactly the right amount needed by a pig born in the wild.Â A piglet’sÂ rooting instinct awakens very early,Â causing the little oinkersÂ toÂ rootÂ the soil with their infant noses. And, wouldn’t you know it, the amount of iron they get out of theÂ soil when they break it up with their snoutsÂ is exactly what they need to survive and thrive.

The amountÂ of ironÂ available in sow’s milk might not be deficient, but neither is it enough for piglets raised on a non-soil floor, such as concrete. Because many farmers, small- and large-scale, opt for this setup, the piglets they raise don’t have access to much-needed iron until they start to creep feedÂ at more than a month old. Of course, then it’s too late, asÂ anemiaâ€”decreasedÂ hemoglobin in the bloodâ€”becomesÂ a problem long before a piglet tries out food.

Farmers of yesteryear figured this out and remedied the problem by delivering ironÂ to newborn pigs.

Supplemental iron isÂ available from farm supply stores in either oral orÂ injectableÂ form. Injections are far and away the most popular delivery method, with farmers commonly deliveringÂ 150 to 200mg of iron dextran in either a 1 or 2ml dose three to five days after birth (it’s not advisable to do this at birth). Use aÂ 1/2-inch 20- or 21-gauge needle to deliver the injection in the neck muscle behind the ear or into the muscle of the hind leg. It’s sometimes necessary to repeat once after weeningâ€”watch for signs of anemia, such as slowed growth, pale coloring around the nose and mouth, and, in extreme cases, rapid breathing or scouring (diarrhea).

If you’re pasturing pigs, however, you can skip all that (unless the ground is frozen, but ideally you won’t have baby piglets in sub-freezing temperatures), as piglets will get the right amount of iron from rooting around in clean, fresh soil. But, as many farmers prefer to provide an indoor environment for farrowing, this ideal scenario isn’t always plausible.

On our farm, sows farrow in a dirt-floor barn, which provides piglets access to soil right at birth. But the barn-floor soil, shaded as it is from the sun, doesn’t grow grass and plants that break down into a nutrient- and mineral-dense dirt. So, out of an abundance of carefulness and a commitment to giving ourÂ pigletsÂ theÂ best start, I grab a shovel and a feed bucket, and head out to a fresh, green piece of pasture. I break the grass and pile mounds of lush topsoil into the bucket, which I carry back to the barn and dump unceremoniously onto the ground.

Piglets take to the dirt immediately, smearing their faces with the iron-rich soil. I’ve since read that this dirt-delivery technique wasÂ commonplace for farmers of yore, whichÂ madeÂ me feel pretty good. In most cases, doing somethingÂ that’sÂ already been done is doingÂ something right.