Do you find eggs that are unusually large? Eggs with two yolks? Eggs with odd shells, thin shells or no shells? Our guide to irregular eggs will explain. 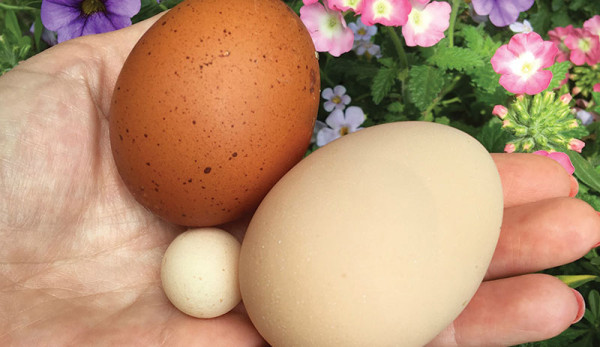 Rookie pullets need a week or two to warm up their reproductive tracts and perfect the egg-making process. Expect first eggs to be smallish and possibly wonky-looking, but don‚Äôt worry much about occasional irregular eggs from a hen of any age.¬†Many odd eggs can be explained by the hen‚Äôs diet, environment or health. The following general guidelines will help you understand some of the more common egg irregularities and interesting factoids but are not intended as an exhaustive review.

Double yolks commonly occur in new layers when yolk release is mistimed and two yolks travel down the oviduct together. Some hens are genetically predisposed to laying double-yolk eggs.
A double-yolk egg rarely hatches.

Tiny eggs containing no yolk are referred to as fairy eggs, wind eggs, dwarf eggs and fart eggs. (I don‚Äôt make this stuff up!) These irregular eggs are also common in new layers when the reproductive system is not yet synchronized but can also occur in older hens when a piece of tissue from the oviduct breaks free, tricking the hen‚Äôs reproductive system into treating the tissue like a yolk and creating an egg.

Eggs with no shell feel rubbery because the membranes are on the outside. These irregular eggs are commonly produced by new layers but can result at any time from stress or often from calcium, phosphorous or vitamin D deficiency.

High environmental temperatures are the most common cause of thin-shelled eggs. A hen‚Äôs increased rate of respiration interferes with calcium carbonate production and shell formation. Older hens generally produce thinner shells as their oviducts wears out.

Eggshells can have different textures caused by a number of factors, from excess calcium or vitamin D intake (pimples that can be scraped off) to double-ovulation, disease, a defective shell gland or rapid changes in lighting (sandpaper shells).

When an egg is delayed in the shell gland, a second egg coming down the oviduct will bonk into it and rest alongside the first egg, causing a flat, wrinkled side. This type of irregular egg can be caused by stress or disease.

Egg Within An Egg

These¬†irregular eggs occur when an egg almost ready to be laid reverses engines and backs up into the reproductive tract, where it meets the next egg in progress. The first egg receives more albumen,¬†membranes and shell before being laid. The cause isn‚Äôt known. Although some characterizes this phenomenon as rare (I have never gotten one from my hens), photos shared with me by other backyard chicken-keepers leads me to conclude that these oddities are significantly more common than previously believed.

I affectionately refer to these irregular eggs as ‚Äúmutant eggs.‚ÄĚ In new layers, an immature shell gland can cause odd shell shape and is most often of no concern. In senior layers, oddly shaped eggs can result from stress or, if they are a regular occurrence, a defective shell gland often caused by infectious bronchitis.

Shells with wrinkles or ‚Äúchecks‚ÄĚ are known as ‚Äúbody check‚ÄĚ eggs and have been damaged while in the shell gland from stress or pressure put upon them. The cracks on these irregular eggs are repaired in the shell gland, resulting in checks or wrinkles.

These can appear as small red dots on the surface of the yolk or as big, nasty clots that tinge the entire albumen. Most are no big deal. Yolks develop inside the hen.

If your hen consistently produces irregular eggs, consult a veterinarian or extension service specialist. Finally, all of these weird eggs are perfectly fine to eat.

A Word About Salpingitis & Lash Eggs

Lash eggs are a very misunderstood phenomenon. I took the liberty of renaming them “pus coaguleggs,” which more accurately describes the nasty bits, clumps and icky masses found inside. Unfortunately, the pus coagulegg comes with a poor prognosis for the hen that produced it.

For a better understanding of this confusing occurrence, I consulted with poultry veterinarian Annika McKillop. Veterinarians simply refer to the nasty junk as caseous exudate (caseousbeing Latin for “cheeselike”).

Lash eggs aren’t really eggs. They are the result of the oviduct infection salpingitis, the most common cause of death in laying hens. The immune system reacts to inflammation by trying to wall off the infection with a waxy, yellowish, cheeselike pus that may or may not contain yolk, albumen, eggshell, egg membrane, blood or bits of tissue from the oviduct wall, but it’s primarily a yellowish, cheesy, pus ball. This is an ominous sign of a very serious infection that most hens don’t recover from.

Pus coaguleggs are bad news for the hen. By the time one is discovered, the problem has been raging inside the hen for months and the prognosis for recovery is poor. Most hens will not survive longer than six months with salpingitis. According to McKillop, if the hen does survive, she is unlikely ever to return to normal laying.

Risk factors for salpingitis include respiratory infections that migrate from the left abdominal air sac into the oviduct, obesity and vent picking that introduces E. coli bacteria into the oviduct from the cloaca. Hens older than 2 years are also at higher risk. Symptoms of salpingitis include decreased egg production, habitual laying of soft-shelled eggs, excessive thirst, lethargy, abdominal swelling, weight loss, labored breathing, penguinlike stance, sporadic deaths in the flock, and, of course, lash eggs.

Even with the best chicken-keeping practices, a hen can contract salpingitis. As always, implement simple steps for healthy hens: feed a complete commercial layer ration, limit treats, provide clean water in clean containers, offer plenty of clean, dry living space, and practice good biosecurity. Vaccinate birds against respiratory diseases such as infectious bronchitis and infectious laryngotracheitis and control bacterial infections in baby chicks. Buy chicks from a supplier that is NPIP-certified against salmonella and mycoplasma, both of which are capable of being passed onto the chick inside the shell, and always obtain necropsies when birds die of unknown causes.

Options for treatment are limited. If it’s detected very early while the pus is relatively soft, antibiotics may help. Unfortunately, symptoms generally appear after the disease has been present for a while, by which point antibiotics are not effective. Surgical removal of the ovary, oviduct and the cheesy junk may be possible, but the risk of infection and recurrence are high. In countries outside the United States, veterinarians can surgically implant hormones to suppress ovulation. Poultry professionals may recommend depopulation (euthanizing the flock) and sanitizing the hens’ living area as one option, but this isn’t realistic for flocks kept as pets.

This story originally appeared in the September/October 2017 issue of¬†Chickens¬†magazine.