Is My Flock Drinking Enough? Proper Hydration For Chickens

Keep hydration levels up during the heat of summer, and learn to spot when they’re down. 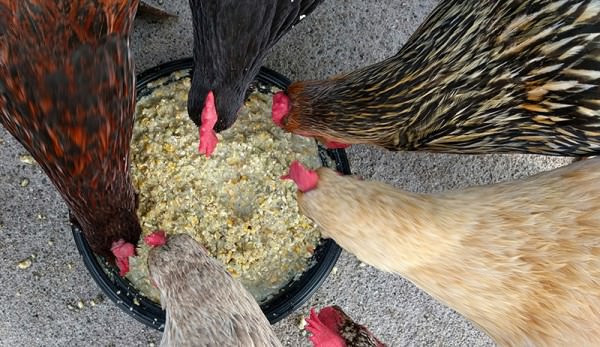 
I’m using a nipple waterer attached to a 5-gallon water cooler, but my chickens don’t seem to be getting enough water, especially on the hot summer days. What should I do?

Chickens are usually very good at meeting their individual needs. If they have access to feed, water, shelter and a dust bath, they thrive on their own. Most of the time, we can trust their instincts, but during the heat of the summer or in the frozen winter, chickens need some human intervention.

How much a chicken drinks in one day varies with its individual needs, its activity level and the heat of the day. Some say each full-sized chicken will drink 1/2 liter per day, and more or less depending on those other variables. I don’t believe my own flock drinks that much. Besides, if a flock free-ranges, they also get water from additional sources, like from insects and fresh greens.

On hot days, and especially during difficult heat waves, it’s good to be concerned about water intake because extreme heat can be very dangerous, even deadly, for chickens. Also, chickens’ built-in cooling mechanism—panting—continuously releases warm water vapor, dehydrating them further. But, drinking (and eating) is usually low on their priority list during the hottest part of the day, when they can suffer the most.

You can lead a chicken to water, but you can’t make it drink. If it isn’t in distress, meaning its acting perky and happy, assume it’s fine. But if the heat is extreme and your chicken is lethargic, it’s time to step in.

Because my flock grew up in the South, they’ve adapted to heat I can’t seem to bear as a native northern human. Where you live, 80 degrees F might be extreme for your chickens. My girls don’t show signs of heat stress until the temperature is in the 90s and the humidity stretches the heat index over 100. On days like those, most water intake happens in early morning and in late evening before bed.

To boost water intake on days forecasted to be very hot, I offer that morning’s feed rations mixed with water. Midday, I offer irresistible treats to hydrate and cool the flock mid-day. Recently, when my flock was showing signs of heat stress, I blended a cold electrolyte smoothie made of ice, some aging fruit and veggies from the fridge, a little salt (an electrolyte), and a spoonful of yogurt. Then I mixed the cold mixture with a little chicken feed to absorb the smoothie, so it didn’t become a liquid mess on my patio. The chickens flocked to the smoothie and cooled down quickly, and their energy level returned to normal, relieved from the stress they felt that afternoon.

Feed: The Best Indicator Of Dehydration

Because of things like evaporation, spillage and leakage, monitoring changing water levels can’t be entirely accurate. It’d also be very difficult to predict how much each individual chicken is drinking on any given day. Looking for evidence of consumption from a large container, like a 5-gallon bottle, could appear that a small backyard flock is drinking next to nothing—the eye is not the best judge.