I love my hand tools. When I moved to Italy, my largest packing crates were filled with tools. 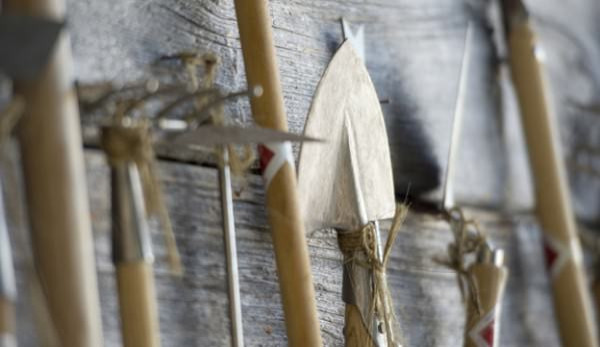 I love my hand tools.

When I moved to Italy, my largest packing crates were filled with tools.Â  Among the group I brought an indestructible cast aluminium trowel, a sturdy welded hand mattock, and a nifty fiberglass-handled hatchet.

I also brought my favorite hammer, which my father had given to me way back when I was about 12 years old. Excellent tools, made to last a lifetime I thought.

Well, so much for that theory. Unfortunately, the trowel, hatchet and hand mattock have all gone on to greener pastures now.

I just do so much banging away at the stumps and rocks on the garden site that the tools all gave up after a season or two.

The basic garden tools I have now are all Italian-made, and I must say that what they lack in tech and design, they more than make up for with their stubborn sturdiness.

These are the sorts of tools that Daniel Boone and his cohorts could have used when they were carving farms out of the virgin forests of Kentucky. My hatchets, my hand mattocks, my shovel and my trowel were all made by blacksmiths, are simple but robust, and generally of thick steel with a lack of joints that might wear out.

These sorts of rustic implements are the most commonly sold garden tools around here.

Iâ€™ll admit that I have broken a few of the wooden handles, but replacing handles is pretty easy, because there are a lot of places here that sell hand-made replacement handles.

The steel on my blacksmith tools has never given way though; somewhat surprising considering the huge amount of rough use Iâ€™ve given them over the last five years or so.

My saws do get dull regularly, because I use them a lot.Â  I suppose that all together, my garden sprawls across about a half acre of cliff, and there were scrub trees growing in every nook where a bit of soil accumulated.Â  Thatâ€™s a lot of trees to cut down.Â  (I am planting a lot of fruit trees, so in the long run I wonâ€™t really be denuding the site.)

During the summer, thereâ€™s a couple of guys from the south of Italy that drive around the neighborhoods up here with a loudspeaker advertising their knife sharpening services.

Last year I had one of them sharpen several of my saws.Â  He was a really friendly guy and had a little workbench in the back of his car.Â  He had a special rack to hold the saw and electric grinder, so he did each of the saws in less than two minutes.

I was very impressed and happy how cheap it was.Â  I paid him 15 euros for three saws, which was about five minutes of work, and then he went happily on his way again.Â  I was happy with my freshly sharpened saws, and I imagine he was happy with his 15 euros.

Happiness is having the tool you need to get the job done.