We had an unexpected visitor in the garden this week, in the form of a large rock that just appeared by itself on a small flat area near the northern edge. 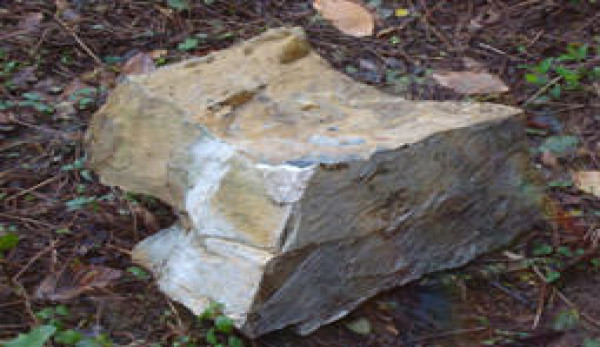 We had an unexpected visitor in the garden this week, in the form of a large rock that just appeared by itself on a small flat area near the northern edge.
This rock, which I estimate is about 400 pounds, just appeared one morning. There is a tall cliff above this area, and the rock must have become dislodged from somewhere up there and fallen down into the garden. Itâ€™s sort of spooky to know that a rock that large could come tumbling down without warning.

There are a lot of landslides here in Italy, mostly because there is so much steep terrain. When it rains heavily, there are always a bunch of landslides that block roads. And several times every year, one sees on television some landslide disaster in which an Italian community is devastated. The biggest landslide this year was a mudslide in Sicily in which something like 50 people died. A dozen or so of them were swept out to sea in the roiling mud, and it took divers almost a month to find all the bodies buried under the mud in the ocean.

The cliff where Iâ€™ve built our garden has also experienced its share of landslides, but Iâ€™m proud to say none since Iâ€™ve started making the terraces. In this way, the garden is actually a big safety project. Before I started, the garden rockfalls were fairly frequent. In an attempt to prevent damage to the parked cars, the neighbors had erected a small chain-link fence along the base of the cliff above the parking lot on the ground level.

The area where the rock came down this week is actually in our garden, but a few feet away on the vacant lot next to the garden. That lot is undeveloped and covered with scrub trees and berry vines. A few years ago, I was woken up during the night by a loud rumbling. Thereâ€™s something unmistakable about the sound of a landslide, so I knew what it was without being able to see what had happened. In the morning we were able to see that a big section of the cliff had come down and the mixture of mud and rocks had come within 6 feet of smashing into our neighborâ€™s home.

Iâ€™m actually running out of rocks for my construction projects in the garden, and I get most of my building rock from a little â€śquarryâ€ť Iâ€™ve created in an upper area where the bedrock is exposed. Itâ€™s hard work breaking the rocks out with a sledgehammer and hand chisel, and Iâ€™ve already gone through three pairs of safety glasses. Our new unexpected visitor will be attacked with the hammer and chisel tomorrow and will probably be converted into a new section of wall by the end of the week. In the meanwhile, Iâ€™m thinking of wearing a hardhat when working in the garden.