I took the train to Milan last week, and was as usual impressed by the enormous agricultural activity in the Po river valley. 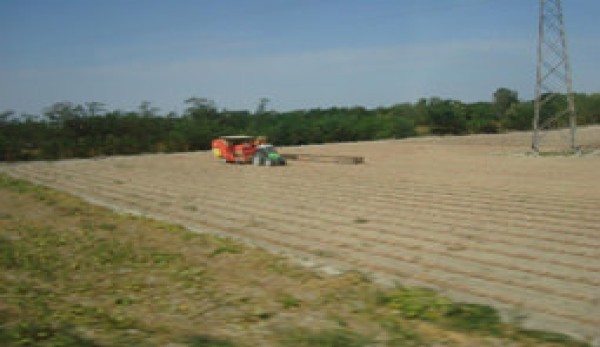 IÂ took the train to Milan last week, and was as usual impressed by the enormous agricultural activity in the Po river valley.Â  The top of Italy is a huge river valley, almost the same size as the central valley in California.Â

Agriculture is dominant in this area, and when one sees the number of cultivated fields, it is easy to see why Italy is one of Europeâ€™s agricultural powerhouses.

The olives that dominate the hilly regions of Italy give way to a more mixed cultivation here in the big flat river valley.Â

All along the edges of this area, where the flat plain gives way to the foothills that lead to the Alps in the north and the Apennine mountains in the west (The Apennine mountains are the chain that runs more or less north south in a ridge in the middle of the peninsula), fruit orchards are common.Â

Yes, Italy does grow a lot of grapes in her foothills, but she also produces a huge amount of tree fruits, and exports a lot of them to the northern European countries.

But the flat area is dominated by rice growers.Â  Riding on the train that runs through the middle of this huge valley, one sees a whole lot of rice fields, and in September, the fields are all golden and ready for the imminent harvest.Â

Here and there are dotted fields of tomatoes, field corn, onions, squash, wheat, timber poplars and alfalfa, but three quarters of the area seems to be planted to rice.Â

After Asia, Italy and California are the biggest rice growing regions in the world.Â  Like California, Italy exports a lot of rice to Asia, but Germany, France and England are the largest consumers of Italian rice.Â  Many Italian growers grow specific varieties destined for German customers, and Italy produces more organically grown rice than any other country.

Thereâ€™s a good mix of agribusiness and small farming here.Â  Medium-sized farmers face the same difficulties of foreign competition as do American farmers, but they arenâ€™t being bought up or forced out in the same way.Â

Family run farms are more common than not and there are a whole lot of organic growers.Â  Most of the small farmers grow for the local markets as well as producing specialty products that can be exported through cooperatives.Â

This big valley starts in the northwest at the base of the mountains that separate France from Italy and runs down to the Adriatic Sea.Â  The Po River is only the largest of the numerous rivers, creeks, canals and watercourses that criss-cross the valley.Â

Milan is the huge sprawling city in the northeast corner of the valley, but even Milan is dwarfed by the surrounding rice fields that come right up to the edge of the city.Â  No surprise that the most famous dishes in Milanese cooking are based on rice.