Two weeks ago, our mom brought a baby animal to our farm. 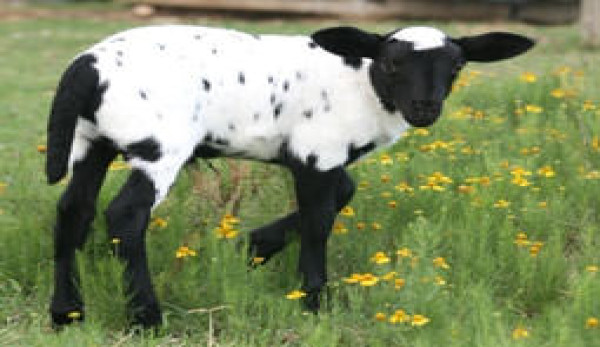 Two weeks ago, our mom brought a baby animal to our farm.

Uzzi and I thought he was a geep! He baahs like a sheep, but he looks like a goat except he has a sheep-like, hangy-down tail.

Mom showed him to us and said he’s a hair sheep lamb and his name is Mopple. Uzzi and I didn’t know what to think, so we waited till everyone (even Mopple—and he was sleeping in our baby crate in the living room!) was sound asleep, then we crept in the house and booted up the computer.

We found out that geep are pretty rare. That’s because sheep have 54 chromosomes and goats have 60 (we’re obviously the better product), so even if sheep and goats get frisky with each other, conception is unlikely to occur. But there are geep!

There’s a geep in Germany named Lisa and she looks a lot like Mopple. Another famous geep is the Toast of Botswana; he lives in Africa and sounds confused. Next we looked up hair sheep, especially the breeds that Mopple is. Mom said he is ¾ Dorper and ¼ Katahdin.

Uzzi and I shook our heads—he looks like the lambs at those websites but why would anyone want a sheep without wool?

Then we noticed a new shortcut on the desktop. It said: The Mopple Chronicles. Can you believe this? Mom is blogging about that funny little beast! We read the first entries and then looked at one another in amazement. It says Mopple is going to learn tricks and agility and how to pull a cart! That’s why Mom wants a really big sheep without wool; sheep have sensitive skin and pulling their wool hurts them, so wool and harness straps don’t mix.

We told the sheep (they’re little and have wool) about the blog and asked them what they think. They say it sounds okay with them. As Rumbler puts it (he’s our ram), “Better him than me!”

So, Uzzi and I are going to be watching that blog to see how Mopple’s training transpires. Check it out—maybe you’d like to read about it too!