Uzzi and I helped Mom research a book she wrote called The Backyard Goat: An Introductory Guide to Keeping Productive Pet Goats (Storey Publishing, 2011), and these are some of the cool things we learned. 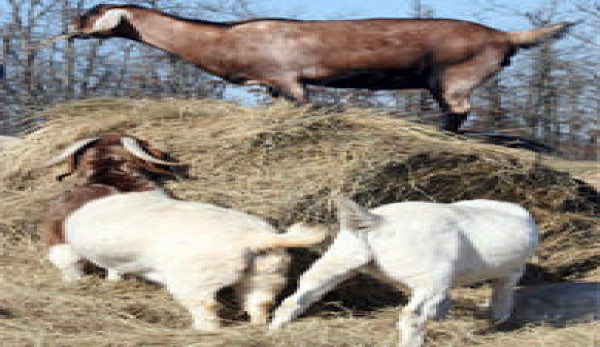 Last Monday was my birthday, so Mom said I could blog about my favorite topic: goats. Uzzi and I helped Mom research a book she wrote called The Backyard Goat: An Introductory Guide to Keeping Productive Pet Goats (Storey Publishing, 2011), and these are some of the cool things we learned.

The word goat comes from the Old English word gat, which means “she-goat.” In Old English a male goat was a bucca, which evolved into buck, the correct term until the late 12th century, when people began calling them he-goats and she-goats. Nanny goat originated in the 18th century and billy goat in the 19th century. Nowadays the proper terms are doe and buck, and a castrated male is a wether.

We goats have prominent eyes with panoramic vision between 320 and 340 degrees, and binocular vision of 20 to 60 degrees. Unless we’re napping or focused on something else, it’s almost impossible to sneak up on us goats.

We prefer certain tastes, especially bitters, and we’re selective about what they eat. We won’t, for example, drink water with poop in it or eat moldy or musty feed. We usually avoid poisonous plants unless they’re wilted, which makes some kinds of plants tastier.

Our sense of touch is also acute. Flies alighting on us elicits a strong response, especially by does on the milking stand—just ask Mom.

We have excellent hearing, especially breeds with erect ears, like Katy the Alpine and Morgan the Sable. We direct our ears in the direction of a sound. Us floppy-eared breeds, like Nubians and Boers, lift the bases of our ears when we want to hear something really well.

We also have an acute sense of smell. Our olfactory systems are more highly developed than yours. Scent helps studly bucks like me tell which does are in heat, and in turn, buck scent attracts our doe friends. Scent and taste helps does recognize and bond with their newborn kids, too.

People who draw cartoons have it wrong. Except under unusual circumstances (like when Katy rushes to butt one of our dogs) we don’t back up, lower our heads and then race toward opponents the way rams do. Instead, we position ourselves a few feet apart while facing one another, rear onto our hind legs and then swoop forward, down and to the side to smash our heads or horns against those of our opponents.

And we love to climb on things, like cars, tractors, haystacks, the roof of your house or anything else that intrigues us. That’s because our ancestors were mountain goats. Some of us climb better than others. My daughter, Simka, is a champ!

When alarmed, we curl our tails tightly over our backs and snort a high-pitched sneeze-like sound. If frightened, we run a short distance and then turn to face whatever scared us. If chased, we scatter. When scared or annoyed, the hair along our spines stands on end. Our body hair sometimes stands up, too. Unless we’re really tame goats, don’t look directly into our faces, especially our eyes. Scary things, like wolves and coyotes, do that. Instead, focus on the target goat’s nearest shoulder. Then she’s less likely to be scared and run away.

Want to read more about us goats? If you do, leave a comment! I’d like to say more but I don’t want to bore my fans.