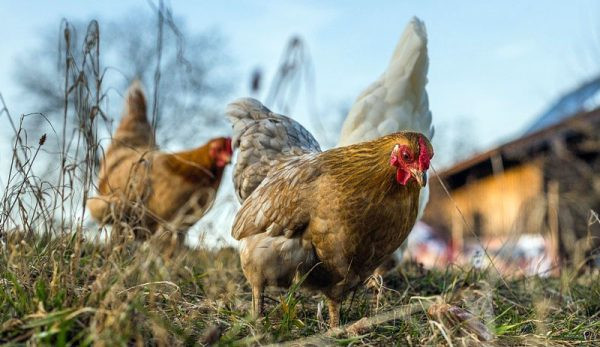 In the January/February 2021 issue, we gave you a feature about some fabulously fowl facts. We had so many that we decided to split the feature in half! For part two, we have some more interesting tidbits, from spontaneous sex reversal to complexities of communication, about your favorite livestock pets.┬Ā

Did you know that occasionally poultry can be both genders? ItŌĆÖs a phenomenon called gynandromorphism.

In ŌĆ£ChickenŌĆÖs Split Sex Identity Revealed,ŌĆØ published in the March 2010 issue of the scientific journal Nature, the research team found that about 1 in 10,000 chickens are born as gynandromorphs. Their cells are normal but half of their cells are male and half are female.

Despite this, they usually only have one of the sex organs (testes or ovaries).┬Ā

Author Janet Fang wrote that researchers studied three chickens that appeared to be literally half-male and half-female. They┬Ā ŌĆ£found that nearly every cell in their bodiesŌĆöfrom wattles to toesŌĆöhas an inherent sex identity. This cell-by-cell sex orientation contrasts sharply with the situation in mammals, in which organism-wide sex identity is established through hormones.ŌĆØ┬Ā

Hens can also appear to change gender, in a process known as spontaneous sex reversal. They are still female but take on some male characteristics.

A disease damaging the chickenŌĆÖs left ovary usually causes spontaneous sex reversal. The right ovary then develops and becomes an ovotestis. The ovotestis can secrete androgens leading to a hen that looks and acts more like a rooster.

In ŌĆ£Sex Reversal in ChickensŌĆØ (2010), poultry researchers Jacqueline Jacob and F. Ben Mather summarized that ŌĆ£every once in a while, you hear a story about a hen that changed into a cock. Such stories are often meet with skepticism, but sex reversals do, in fact, occur, although not very frequently.

Read more: Interested in chicken-keeping? Here are a few important things to know.

Science shows chickens dream, too! Just like us, birds experience REM (rapid eye movement) sleep, the sleep stage associated with dreaming. However, their sleep stage schedule is different from humans.┬Ā

The study (ŌĆ£Mammalian-like Features of Sleep Structure in Zebra FinchesŌĆØ) states that birds share many features of sleep in common with mammals. But this collective suite of characteristics had not been known in any one species outside of mammals. Researchers hypothesize that shared, ancestral characteristics of sleep evolved under selective pressures common to songbirds and mammals.┬Ā

Sleep is crucial for chickens but leaves them vulnerable to predators. Nature has a solution.

Chickens can sleep with one eye open and one eye closed! ItŌĆÖs a stage of sleep called ŌĆ£unihemispheric slow-wave sleepŌĆØ that allows half the brain to get rest while the other half stays alert for predators.┬Ā

Scientists at Link├Čping University in Sweden found that hens with the largest combs are likely to get a bigger dose of sperm from roosters, according to a paper presented in the science journal PLoS Genetics.┬Ā

Size matters regarding wattles, too. Hens are often drawn to large and bright wattles as well as frequent tidbitting behavior (when roosters pick up food and drop it in front of them). ┬Ā

The December 2009 issue of Animal Behaviour includes results of a study that used animated roosters. Hens responded most quickly to those with normal or stationary wattles, rather than ones lacking wattles or ones with an extra floppy wattle (that appeared smaller in size from flopping so much).

Apparently, wattles help a rooster draw attention to himself as he tidbits. It’s similar to a guy in eye-catching clothing showing off his best dance moves!┬Ā

ŌĆ£Wattles are thin, elastic structures that hang loosely from a maleŌĆÖs lower mandibles and vary in size over a maleŌĆÖs lifetime,ŌĆØ researchers wrote.

Results revealed that the food-searching response of receivers was robust to changes in wattle size and motion. They suggested that wattles maintenance enhances signal efficacy.

Read more: Need quiet birds for your backyard flock? Here are the breeds you should know.

Chicken language is more complex than some realize. Scientists have found chickens have more than 30 recognizable phrases they use to communicate, and their language is very nuanced.

For example, chickens give alarm calls when they see predators. But the study ŌĆ£On the Meaning of Alarm Calls ŌĆ”ŌĆØ in the July 1993 issue of Animal Behaviour, showed that when roosters notice predators, they give a completely different alarm call depending on the type of predator (aerial versus terrestrial).┬Ā

Well, thatŌĆÖs all the fabulous fowl facts we have at the moment. WeŌĆÖll keep you updated on any scientific breakthroughs in the poultry world.

In the meantime, start taking your own notes. Do your chickens have communication quirks? Have you seen spontaneous sex reversal in your flock?

You might discover some interesting biological happenings in your own flock!

Reader Regan Rockhill from Maryland passed along a bit of neat advice:┬Ā

ŌĆ£I have a small hobby farm with a small chicken coop with no electricity to it,ŌĆØ he wrote us. ŌĆ£I have a solar-powered, automatic open/close door for my coop which works great, and I also bought a solar light with a remote control (less than $20). ┬Ā

ŌĆ£At night, I turn the light on and press the button for it to go off in four hours. There are three levels of lights, so I can choose the lower brightness but keep the coop lighted. By pressing one button, I can get four more hours of light for my chickens during the winter months. ┬Ā

ŌĆ£It works great and is easy to install. Simply place the small solar panel outside, run the wire into the coop and attach it to the bulb. ItŌĆÖs a great way to get laying hens more light at next to no cost.ŌĆØ

This article originally appeared in the May/June 2021 issue of┬ĀChickens┬Āmagazine.